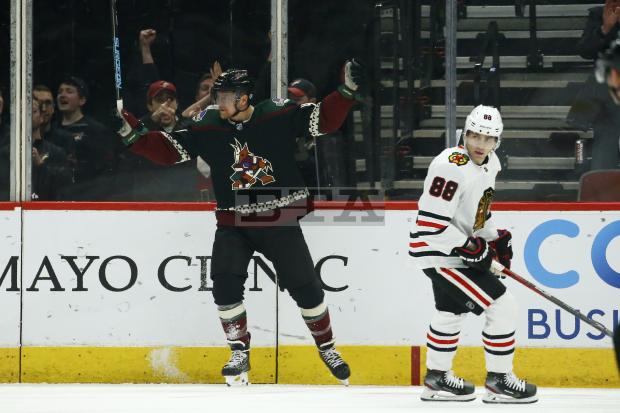 As has been the way under Jeremy Colliton, whenever the Hawks get entangled with a team they’re supposedly tussling with for a playoff spot, they scream at their shoes. The Knights are much better than the Hawks, but they have a wildcard spot the Hawks claim they want. They crushed the Hawks. The Yotes are likely to be in or near the wildcard spots. They have now beaten the Hawks twice in a week, and pretty much ran them over tonight. Continuing theme.

It’s obvious the Hawks cannot handle the absences of Duncan Keith and Calvin de Haan. Without them, they have exactly one guy who plays defense at an NHL level. That’s Connor Murphy. Clearly he can’t do it all himself. They will continue to get shredded until those two return, and no team should ever depend on those two players so much.

I guess the best way to view the Hawks from here on out is both in a redevelopment fashion and a win-now one. Since we don’t know which path the Hawks have chosen, and they very well may not have chosen either, it’s kind of our only choice.

-An up and down night for Adam Boqvist. Dominant possession-wise, which is why he’s here. But an iffy pinch led to the first Coyotes goal, though Gustafsson could have had a better angle and Lehner could have made a save. He and Gilbert were split for Keller’s breakaway, and I don’t know how playing either with the other is going to help one of them at all. But this is how you learn.

-Um…Kirby Dach looked threatening at times, and the training wheels of playing him on the fourth line have to come off now, because the Hawks need goals.

-It’s hard to figure out what is Jeremy Colliton’s fault and what isn’t. But you’ll notice when a Hawks puck-carrier is under any pressure, be it on the blue lines or along the boards, do the other Hawks come close to give him an option or do they fade behind opponents just hoping the puck will find them in space? You’ll see it’s the latter more often than not. That’s cheating. That’s playing for yourself. And that speaks to a team with no structure. The Hawks are trying to manufacture transition by having their forwards cheat out of the zone instead of just being fast out of it. That’s a good deal on the coach, and the lack of talent too. It’s all a problem.

-The give-a-shit meter was on absolute zero for Kane tonight, which isn’t surprising and understandable. It was kind of a piss poor effort on the Schmaltz goal, and he seemed to be taking the easy option most of the time. I don’t expect Kane to be on high alert for all 82, but just know the Hawks will never create enough when he’s not.

-The power play only scores when DeBrincat move the puck quickly, either to the net or to the open man, or if Kane makes his James Harden routine work. The latter is not a tactic they should be using. Kane needs to be a threat for a one-timer coming from the other way than the teams cheating to DeBrincat. Until that happens, you’ll get this choppiness.

-Any team, especially when they’re ahead, that is well coached enough to follow the plan of simply standing up at their blue line has the Hawks buffaloed. If the Hawks have to dump the puck in, they’re simply not fast enough nor have the players who can win the puck back consistently. The ones who can are all on one line, and Toews isn’t quick enough anymore to get there. They also don’t have enough creativity to break through that kind of defense, which is why Boqvist’s possession numbers are among the best on the team tonight because he’s the only one who can.

-Did I mention that Gustafsson is awful?

-The season very well could be over by the weekend. Maybe it’ll force the Hawks into real decisions.