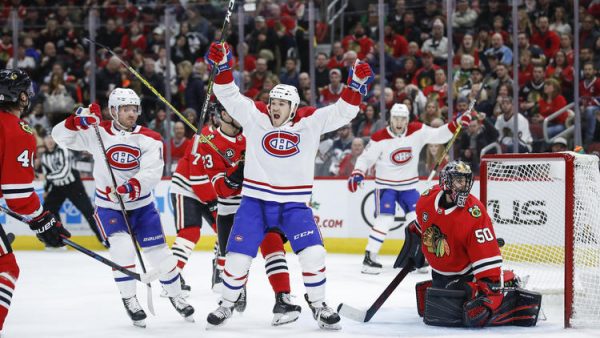 Another game, another heartbreaker. The Hawks actually generated a shitload of shots. Even more surprising, they didn’t give up a shitload, but rather just a regular load. And the power plays…so, so many power plays. And yet, they still couldn’t close it out. I want to watch the Bears game as much as you do, so let’s just get to it:

–Oh, those power plays. The Hawks had a total of eight. That’s right, eight power plays, including one double minor when Jordie Benn hacked open Dylan Strome‘s face with a high stick in the third. Yes, Patrick Kane did score on the first power play, so that’s…something? But to have that many chances and not convert on more of them is just embarrassing. There were conspicuously fewer drop passes getting into the zone, but way too many Seabrook shots from the blue line that Price and everyone else could see coming a mile away. John Hayden was positioned well to screen, but the puck kept bouncing off his chest and he ended up doing Price’s job for him, rather than him deflecting it in or finding a rebound. It was absurd. Really, at this point, I don’t know how else to describe their power play.

–  Other frustrating numbers include the shots on goal. The Hawks only gave up 28, which is downright normal. Instead, THEY were the team with 39 shots. This is what they need to be doing and it would suggest their defense played better finally. The third goal wasn’t terrible but still one Crawford would of course like to have back. It was just deflating after they ostensibly did what they’re supposed to do.

– Patrick Kane had the two goals, which was good to see after a bit of a drought. Also, our Irish Son Connor Murphy played well in his first game back. He had four shots on goal and a 62 CF%. I didn’t understand why Colliton made a lot of the defensive changes that he did, but Murphy had over a 60% with both Keith and Gustafsson, so at least he may still be versatile with the blender.

– And really, what the fuck was that all about? Keith and Seabrook were paired back together in the second and third, and their possession number was 0.00. I thought that was an error, but no. Their CF% with each other was zero. Meanwhile, Keith and Jokiharju had a 55 CF%. Relatedly, Joker’s numbers with Brandon fucking Manning, who he got stuck with for far too long, was a dismal 28.6 CF% (these are in all situations, which I looked at because there was so much damn power play time it seemed disingenuous to look at only even strength). I realize Colliton is working with a lack of talent and clearly is in over his head, but using Q’s blankie of Keith and Seabrook is nonsensical at this point. And why, for the love of god, would you put your teenage talent with a useless jamoke from whom he can only learn mistakes and failure?

– I will end on one last sort-of positive note: Alex DeBrincat had a good game after not doing much of anything lately. He and Dylan Strome do seem to still have some chemistry (duh), and Top Cat had multiple pretty chances (three, to be exact), including drawing one of the five million penalties. He even pulled off a nifty spin-o-rama to keep possession in the offensive zone, and finished the night with an 82.6 CF% (again, all situations). If only he’d been a little more effective with his power play minutes, then he really would have had himself a game.

It’s exhausting. It’s exhausting to decry the same problems game after game. And it’s even more difficult to do it when they’re slowly improving in fits and starts, and yet the results aren’t there. Again, there’s no rest for the wicked as they’ll be seeing the Jets twice this week along with the Penguins and Sharks. Onward and upward?