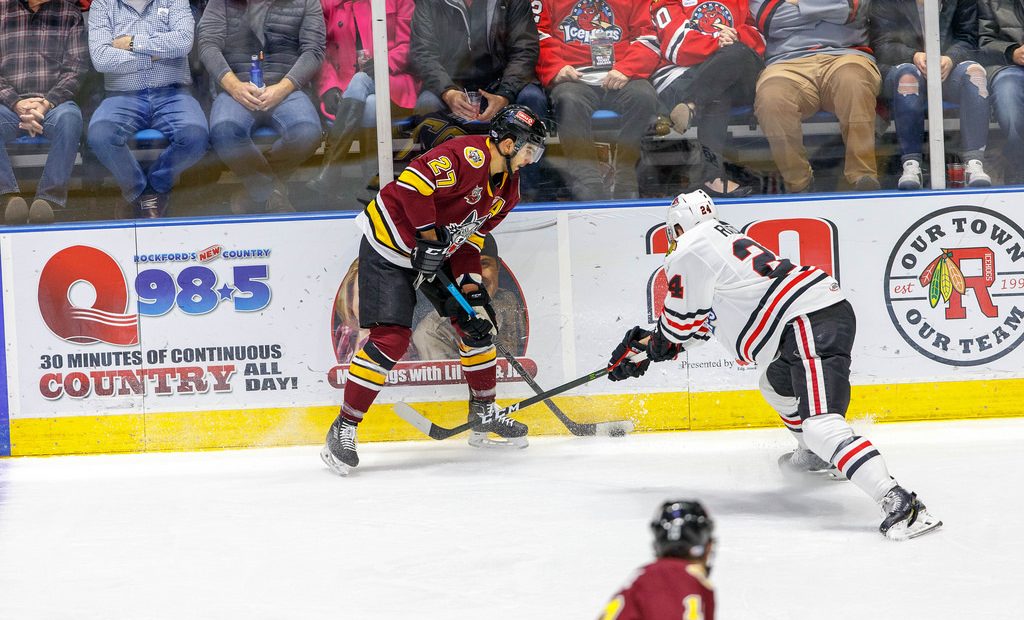 The Rockford IceHogs split a weekend set at the BMO Harris Bank Center, besting Grand Rapids in overtime Friday night before a lackluster performance the next evening against the Chicago Wolves.

The scuffling piglets (11-10-1-4) are still looking for some offensive spark and sit in sixth place in the AHL’s Central Division standings with a .519 points percentage. With plenty of home games left this month, Rockford will attempt to improve upon its 5-5-0-2 mark when playing host.

On Friday night, the Hogs announced that they were releasing Justin Auger from his PTO. Auger played nine games with Rockford, contributing a pair of goals to the cause.

A Look At Development

With the Blackhawks so thin in terms of depth this season, I got to thinking about Rockford’s role in the current downturn in the organization. In order to maintain long-term success, you have to replace a certain amount of a winning roster. The IceHogs have sent scores of players on to the next level. Looking at little closer at the pipeline, however, it becomes apparent that few quality replacement parts have been developed in Rockford.

Here are the players from the Blackhawks current roster who have seen time at the BMO with the IceHogs. The bold type names are the players I believe to have been true products of Chicago’s minor league system.

Saad and Kruger only were in Rockford because of the NHL work stoppage in 2012-13. Martinsen came to the organization with a couple of seasons of NHL experience. Kampf and Fortin are free-agent signings; Kampf was in Rockford for just 33 games and Fortin was unproductive and missed time last year to injury in his rookie season with the IceHogs.

Gustafsson cut his teeth in Rockford, with 120 Rockford appearances over three seasons. Forsling isn’t a finished product by any means. He may never be. Either way, he has just 48 games with the Hogs.

As I’ve mentioned quite a bit in the past, Crawford spent five seasons in the minors. Three of those seasons were in Rockford.

You can pick through the above list and come to your own conclusions.

So…how has the gang in Rockford done in developing Stan Bowman’s draft picks?

Well, let’s look at the last Dale Tallon draft in 2009 and Bowman’s subsequent picks spanning the last nine years. Which players were developed in the minor league system and became long-term productive players? The 64,000-dollar question, of course-which players developed in Rockford have made big-time contributions for the Blackhawks?

The answer may not agree with your stomach, so sit down.

Here’s the rundown, starting with Tallon’s 2009 draft picks that have appeared in the NHL:

Olsen, the Hawks first-rounder that season, has to be labeled a bust. After a brief stint in Chicago, Olsen spent some time in Florida with limited success. He’s currently playing in England.

Pompous Madcap (Froese) didn’t get much of a look in Rockford after being taken in the fourth round, but did reach the NHL in the Leafs organization.

Brandon Pirri played 238 games with the IceHogs before being traded out of the organization. Chicago’s second-round pick in 2009 has 228 NHL games under his belt but has spent most of the last two seasons with the AHL’s Chicago Wolves. He is currently leading the AHL in scoring and dropped a hat trick on the IceHogs Saturday night.

Marcus Kruger came over from Sweden after being drafted in the fifth round. His 34 games in Rockford came in 2013, when the NHL was on strike. I don’t consider him to be a product of the minor-league system.

None of Chicago’s other four picks reached the NHL.

Simpson, one of Chicago’s second-round picks, played 20 minutes of NHL hockey. Nuff said. The other second-rounder, Johns, played 59 games with Rockford over parts of two seasons. He may or may not realize his potential at defense. However, that won’t be happening for the Hawks.

Nordstrom, a third round pick, has several seasons of NHL experience and is currently with the Bruins. He appeared in 92 games with the IceHogs over three seasons.

Kevin Hayes, Bowman’s first-round selection, is a solid NHL player. However, he never spent a day in the Hawks organization.

Justin Holl, a defenseman the Hawks quickly gave up on after drafting him in the second round, has been a solid AHL player with the Toronto Marlies. Last season, he appeared in two games with the Maple Leafs.

None of the other six Bowman selections made the NHL.

Hogs Developed: Nordstrom, a bottom-six player who briefly played for the Hawks. To a lesser extent, Johns, who is also in another organization.

Saad and Shaw are the big names in terms of players contributing to the success of the Blackhawks. Saad’s 31 games in Rockford came only because of the NHL strike. Shaw also played in Rockford before the NHL got their business settled with the players in that 2012-13 season. He had 38 games with the Hogs in his rookie season before his meteoric rise to the NHL.

McNeill was in Rockford for several seasons. Aside from a couple of NHL starts, Bowman’s top pick hasn’t made it out of the minors. Danault, the other first-round selection, spent 160 games in Rockford and has developed into a decent player…for the Canadiens.

Clendening is a very good AHL defenseman who hasn’t been able to secure steady work in the NHL. He has 223 games in two stints with the Hogs. Dahlbeck was in Rockford for three seasons and played 170 NHL contests, though just four for the Hawks. He is currently in the KHL.

Alex Broadhurst played 104 games for the IceHogs and did reach the NHL for a cup of coffee with the Blue Jackets. He has spent most of his career in Cleveland of the AHL. Paliotta played one game for Chicago after the third-round pick was signed. He’s bounced around the AHL but never played in Rockford.

None of the other three Bowman selections have made the NHL. Maxim Shulanov and Sam Jardine were briefly with the IceHogs.

Hogs Developed: Shaw, because the IceHogs were his proving ground for the Blackhawks. Danault, a solid NHL contributor. Dahlbeck and Clendening as fringe defensemen.

Both Teravainen and Hinostroza, Bowman’s first and sixth-round picks, are smallish, speedy playmakers who will were traded out of the organization to entice other clubs to take on unwanted contracts. Sorry I had to bring this up.

Teravainen had just 44 games in Rockford, mostly during the 2014-15 season before being recalled by the Hawks. Hinostroza appeared in 104 games with the IceHogs over four different seasons.

None of the other six Bowman picks have reached the NHL. Matt Tomkins, a seventh-round pick, is on an AHL contract with Rockford and has been in Indy for most of this season and last.

Hogs Developed: Hinostroza, who will apply the lessons learned in Arizona for now.

Two seasons and change in an IceHogs sweater for Hartman, who figures to be a productive player for a few years. Motte, Bowman’s fourth-round pick, played 48 games in Rockford and is now playing in Vancouver with 108 NHL games under his belt.

At this point, I would say that the jury is out on Dahlstrom and Johnson as well as Anthony Louis, who has yet to appear in a Chicago sweater. All three remain in the organization. I would categorize this trio as still being works in progress. Hayden has 24 games in Rockford, but I can’t say there was a lot of development going on in his case.

Hogs Developed: Hartman, Motte. Again, neither is contributing to the Blackhawks fortunes.

There is no use going through the past five drafts, as only Nick Schmaltz (remember back when he was on the Hawks?), Alex DiBrincat and Henri Jokiharju have NHL time at this point. Schmaltz was in Rockford for a short spell, but the Hogs can’t claim to have developed these players.

Blake Hillman, a sixth-rounder from 2016, burned a year of his entry deal in Chicago last spring and is currently in Rockford. Time will tell how these more recent draft picks will develop.

Ready for the roll call of Bowman’s picks who have made lasting impressions after being polished by the IceHogs? Here it comes…

…nope, that’s pretty much it.

There are more first and second-round picks that Rockford hasn’t be able to make into productive players. Shaw was a fifth-round selection that started on an AHL contract and just kept proving people wrong (put me near the top of that list) about his NHL prospects.

If you want to make yourself feel a little better about the development process, you can widen the scope and put Hartman in that club. He did play in Chicago for 141 games.

Otherwise, Bowman’s draft trove is comprised of players who never worked out, weren’t polished in Rockford, developed and were moved out of the organization, or are on the currently roster with a not-quite-ready-for prime time status.

Would Danault, Johns, Teravainen, Hinostroza and Hartman be an upgrade on the current bottom six of the Blackhawks. Probably. Cap issues required that Bowman let these horses out of the barn. No use crying about it, at least too much.

While the IceHogs certainly have moved players to the NHL level in their time as the Hawks AHL affiliate, that talent has not made a lasting impact for the organization. Chicago’s depth has not been replaced from within. For the Blackhawks to get the arrow moving in the right direction, this is where things need to change.

Oh…And Here Are This Week’s Recaps

Dylan Sikura put the Hogs on his back in the final 25 minutes of action, posting a two-goal effort. Those goals brought Rockford back from a goal down to beat Grand Rapids.

After a scoreless first period, the Hogs and Griffins traded goals in the opening minutes of the middle frame. The IceHogs were attempting to clear the defensive zone; Joni Tuulola got the puck up the half boards to Nick Moutrey, who lobbed it up and over the neutral zone.

Nathan Noel chased down the puck and avoided a check attempt by Libor Sulak of the Griffins. Noel’s backhand got the best of Grand Rapids goalie Harri Sateri for a 1-0 Rockford lead at the 2:54 mark of the second period.

Givani Smith evened the score 51 seconds later, beating Hogs starter Anton Forsberg to the upper right corner of the net. The score remained knotted at one at the second intermission.

A turnover behind the Hogs net resulted in Matt Puempel setting up Derek Hulak in the slot. The shot five-holed Forsberg as he tried to cut off the attempt and Grand Rapids led 2-1 4:18 into the third period.

It took until the latter stages of the final frame, but Rockford came up with the equalizer on the power play. Dylan Sikura took an entry pass from Jordan Schroeder, flew past the defense and sent a shot between Sateri’s pads at the 17:02 mark.

Rockford ended regulation on a man advantage, which carried over to Gus Macker Time. For 57 seconds, the Hogs took several whacks at Sateri but couldn’t convert. Forsberg and Sateri both bailed out their respective clubs with great saves. The Hogs prevailed when Sikura got the back of his stick on Tuulola’s shot with 37 seconds remaining in extra time.

Forsberg stopped 41 shots to pick up his first win at the BMO this season. Sikura, Forsberg and Noel were the three stars of the game.

Collin Delia was saddled with the loss in his return from a leg injury. Delia stopped 35 shots on the night but was no match for Pirri, who beat Rockford in transition as well as on the power play.

The Hogs travel to Grand Rapids Friday before returning to Rockford to complete a three-game in three days weekend. Texas comes a calling Saturday; the Griffins come to the BMO Sunday afternoon.