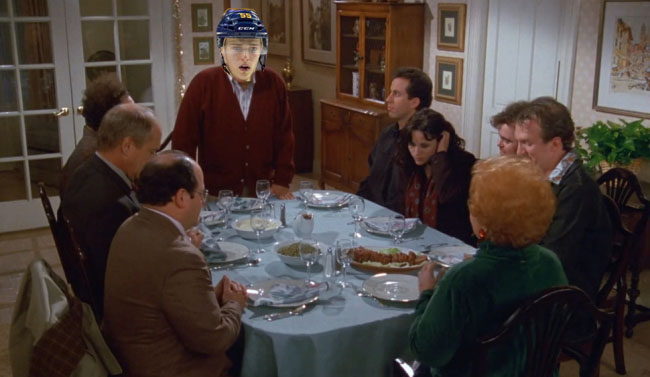 The Sabres have been thrashing about in the pool for a while now, seemingly never able to get their feet to the bottom of the pool or even tread water before they can start swimming. They have swayed from plan to plan and coach to coach and now GM to GM, and remain anchored to the bottom of the standings. If you squint, you can sort of see what they are trying to do. If you’re building a hockey team, you want a true #1 center, and maybe one more behind that. You want a surefire top pairing defenseman, though as the Penguins showed last year if you have two, genuine #1 centers, or more to the point two Hall of Fame centers, you don’t really need the d-man. And you’d like a goalie. The Sabres thought they had the goalie in Robin Lehner. That hasn’t worked out. They have the center in Jack Eichel. And they have another really good one in Ryan O’Reilly. And they told everyone they had the d-man in Rasmus Ristolainen.

The thing was, no one else believed them about Rasmus. We had seen him utterly dominate the World Juniors with our Dear Sweet Boy in Finland’s gold medal run of 2014 in Sweden. We knew about the draft pedigree. The size and skating ability are there for all to see.

But Rasmus never really put it together. All of his even-strength metrics for his entire career have been underwhelming, and that’s being kind. While the Sabres have sucked deep pond scum for years, Ristolainen couldn’t even match that. His relative Corsi ratings were -1.7, -0.57, -3.4, and -5.5. Again, that’s on some dog ass teams, but Rasmus couldn’t even manage “dog ass.” His relative xGF% marks weren’t any better. Again, they’re “sub-dog ass.”

Sabres fans, in their desperation most likely. would point to the last two seasons of 40+ points. However, of Ristolainen’s 86 points the past two seasons, 45 of them came on the power play. Rasmus’s even-strength numbers didn’t even crack the top 50 among d-men for even-strength scoring.

But…Rasmus seems to have turned a corner this year, even if his team remains steadfastly “dog ass.”

Ristolainen’s CF% is 50.6, and that’s above the team-rate by 1.7 points. His xGF% of 50.1 is miles above the team’s mark, by 8.36 points. That’s one of the best relative xGF% in the league. Ristolainen has seen his points per game drop, but that’s not really on him. Also, Rasmus is averaging way more attempts at even-strength himself than he ever has, he just can’t get any of them to go in. That will change.

More impressively, Ristolainen is taking on the toughest competition of his career and harder zone starts. He’s acting like a real live #1 d-man.

Perhaps Ristolainen being tossed in the deep end at 18 was a bit much to ask. Maybe it takes until the age of 23 to really figure out what’s going on. It’s only 27 games, and Rasmus will have to do this over a whole season. If he does though, he becomes one of the bigger bargains in the league. He signed an extension before last season that pays him $5.4 million per year for four more seasons after this one. Considering what the going rate is for top pairing d-men, that could end up a steal. That’s what happens when you pay for what you think a guy will do and get it right, instead of trying to compensate for what he’s done.

The Sabres still have a lot of pieces to fill in. They might not have another d-man on the roster who’s going to be there when they matter again. They are a few forwards short. But you’re definitely not going anywhere if you don’t have the big pieces solved. Check out the Oilers for more evidence. The Sabres might have been right all along.