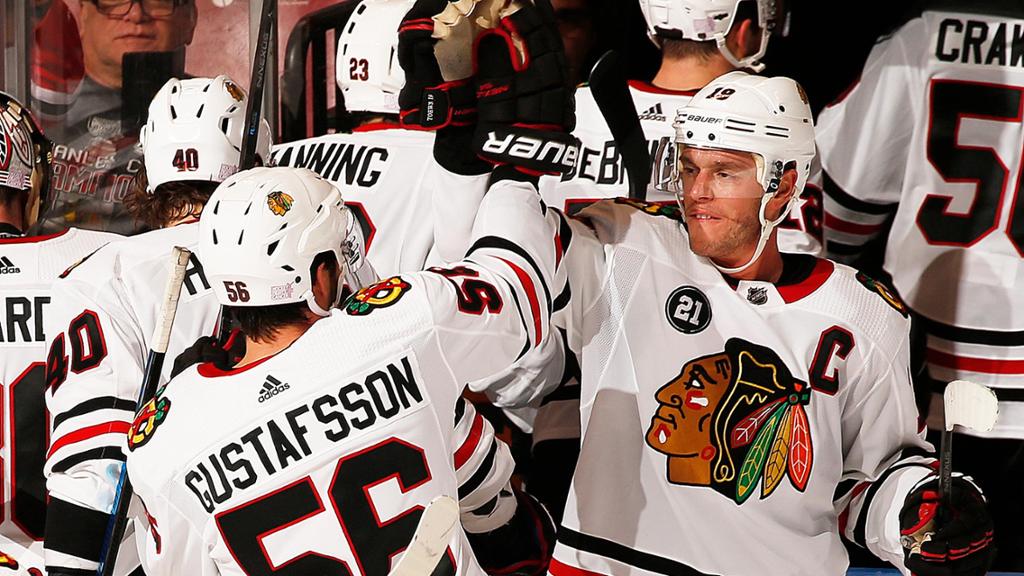 Sometimes hockey is just bad, stupid fun and there’s hardly a rhyme or reason. The Hawks put up a fight when it mattered most, and with some much-missed puck luck, they managed to pull out two points in a game in which they didn’t deserve one. To the bullets.

– Brandon Saad was a wild stallion from just about front to back. On the first game-tying goal, he used that straight-line power we all crave to carve up Mike Matheson and managed to squeeze a pass onto Kane’s stick perfectly, despite pressure from Aaron Ekblad and Evgenii Dadonov. His semi-blind pass from behind the net onto DeBrincat’s stick for the second game-tying goal resulted from better positioning and a bit more power against Dadonov below the goal line. And he almost potted one himself after John Hayden’s squib pass found his stick in the blue paint late in the third. Saad came to life in the third period especially, much like the rest of the Hawks, and sported a 77+ CF% when paired with Hayden and Jonathan Toews. When Brandon Saad fucks, Brandon Saad fucks.

– It wasn’t until the third period that the Hawks made any real rumblings at making this a game. Despite tying it in the second, the Hawks had a 27+ CF% through two. But after Colliton switched up the lines, broke up 20–19–88, and re-paired Duncan Keith and Henri Jokiharju, the Hawks completely dominated play to the tune of a 75 CF% in the third. We all get the theory behind 20–19–88, but they simply haven’t dominated together. Your nuclear line can’t really be considered nuclear when it gets domed on the ice. After the break up, you saw much evener fluidity in passing.

– The only line that stayed together all night was Nick Schmaltz–David Kampf–Dominik Kahun, and they were mostly decent. After the first period, I wondered what exactly Kampf was doing to warrant second-line center minutes. Then he pulled that incredible power move on Ekblad off a Kahun feed, which is something I don’t think any of us expected he could do. It was nice to see a higher level in Kampf’s play, and if there’s more of that in reserve, we’ve got an interesting guy on our hands. It’s still concerning that Kampf and Kahun were much more noticeable than Schmaltz, the supposed $6 million man, but I’ll gladly take what they gave tonight. You can hear the contempt in Foley’s voice any time Schmaltz does anything out there now, though.

– Alexandre Fortin is as close to a Luis Mendoza as the Hawks will ever have. I don’t know that he does anything other than go really fast in a straight line and find himself in the middle of all on-ice whimsy. After an excellent pick off Nick Bjugstad’s stick while Bjugstad attempted to set up a PP rush, Fortin got stuffed by James Reimer’s right pad, only to flick the puck by Reimer off his left skate as he was coming down from a jump. He’s got no normal finish whatsoever, but his PK trick shot tonight would have been the highlight even if the Hawks hadn’t won.

– The coverage this team has on defense is by far some of the worst we’ve seen in a while. Eddie O. took a good five minutes in the pregame to defend the system, instead blaming a lack of awareness from players for the A+ chances they give up. I get that, but this looks a lot like a chicken-egg argument. Even when the Hawks were bad last year, I don’t remember seeing as many opponents streaking full steam ahead through the slot as I have in the last two games. Florida’s second goal came when Fortin and Hayden inexplicably shadowed Colton Sceviour on the near boards, even though Jokiharju had him covered. This left Jared McCann all the time and space in the world in the slot. Their third goal came from Kane trying to cheat out of the zone, leaving Ekblad wide open in the slot. Whether it’s adjustment to a new system or a lack of talent within that system (or both), it’s made for many more high-quality chances for Hawks’s opponents.

– Erik Gustafsson taketh away, and Erik Gustafsson giveth. After a mostly dogshit day, including letting his aggressiveness get the best of him and setting up Florida’s second goal after crashing too quickly and deeply by himself, Gustafsson popped the game winner in the clown show.

– For the last goddamn time, Alex DeBrincat is not a fucking third liner. We’ve done this experiment too many times over the last two years. You stick him with one of Kane, Toews, or Saad, and you let him fucking go. It’s not hard.

The Hawks had no business taking two tonight, which makes those points all the sweeter. Las Vegas is next.

Line of the Night: “Unfortunately, Manning took the ice.” –Eddie O. describing a turnover between Brandon Manning and Alex DeBrincat as a result of the two being too close together.