Game #18 – I Got a Molotov Cocktail With a Match to Go, I Smoke My Cigarette With Style – Hawks 5, Knights 3 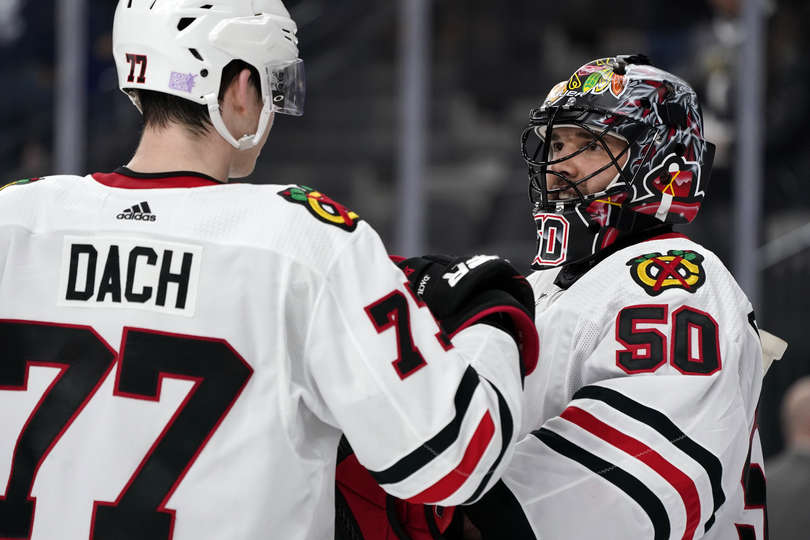 Holy shit, that was fun. I would like every game to be like this going forward. Air raid, motherfuckers. Let’s clean it up.

– Corey Crawford is a goddamn treasure and he should have his number retired. Nights like tonight remind you just how important he’s been to this team for the last nine years. Per usual, the Hawks got mauled in shots on goal, but Corey Crawford could not give less of a fuck about that if he took a vow of celibacy. He made 39 saves on 42 shots, including about 10 high-danger saves. Not one of the goals he gave up was on him. He kept the Hawks ahead in the second, when the Knights pressed the hardest. He even got called for a bullshit “throwing object” penalty and withstood a Marchessault penalty shot.

We say this just about every game, but without the goaltending, this is a route. Corey Crawford was the star of this shootout.

– The 12–17–88 line was furious tonight. DeBrincat and Strome were nails with their passing, and Garbage Dick scored a much-needed answer goal in the first. On that goal, DeBrincat shrugged off pressure from Karlsson and left a soft pass for Strome along the far boards. Then, Strome fired a cross-ice pass to a streaking Kane, who was left all alone for a quick one timer.

Then, for the coup de grace in the third, Strome took a backhand saucer pass from DeBrincat up the middle and potted the Hawks’s fifth goal high glove side. The Hawks scored three of their five high glove.

– Kirby Dach is going to be a special player. I bitched and moaned when they took him over Byram, but I’m happy to be entirely fucking wrong about that. Can you believe that his goal was probably the second most impressive play he made tonight? And boy, what a goal it was. Zack Smith (more on him shortly) made Ryan Reaves look like, well, Ryan Reaves, along the near boards, angling a pass toward Ryan Carpenter. Carpenter pushed the puck up to Dach, who stuffed home his own rebound after Flower’s initial denial. That would have been impressive enough. But check this fucking shit out:

Seabrook makes a pass up the boards to a well-covered Dach. Despite getting imprisoned along the boards by Nick “The” Hague, Dach managed to shovel a one-handed pass to Zack Smith (there’s that name again), who then fed a pass to de Haan for the Hawks’s second goal. The strength and poise to make a play like that is exceptional, and Dach made it look easy. Just imagine what he’s going to do with 30 extra pounds. Plus, he led all Hawks in possession and was one of just four Hawks to finish above water (Maatta, Carpenter, DeBrincat). Holy shit, what fun.

– Calvin de Haan put on a “Fuck Your Analytics” clinic. He and Seabrook may have gotten pasted in possession to the tune of a 29+ and 34+ CF%, respectively, but it didn’t matter. De Haan’s goal was a masterful high-glove shot. Though we usually scoff at blocks, each of de Haan’s three was purposeful. His defense after the first period was essential.

Yeah, his piss coverage on the PK—wherein he floated toward the near boards to cover a low-risk Marchessault, giving Karlsson a parting-of-the-Red-Sea-sized lane to drive down—led to a goal. And his questionable coverage of Patches earlier in the first period—covering Patches, who was skating behind the net, by flying in front of Crawford—nearly led to another goal. But he tightened up in the second and third and was the good kind of noticeable the rest of the way. Fuck Corsi, indeed.

– I would like to officially take back any bad things I’ve ever said about Zack Smith. A penalty shot, two outstanding assists, embarrassing Ryan Reaves more so than Ryan Reaves does naturally, and a 100 GF% is quite a night. He was one of the most fun guys to watch out there tonight.

– Nylander had a couple of nice passes again, sandwiched between a few bad turnovers and a lot of invisibility. Conversely, Kubalik was quiet most of the night until the end of the second, when he had two prime chances stuffed. I get not wanting to change what’s working (for whatever reason it’s working), but I’d like to see those two flip spots. Just to see.

– With Connor Murphy coming back this weekend, this was likely the last we’ve seen of Boqvist for a while. It’s dumb, but I guess in context, it makes sense. He had a really strong first period (72+ CF%, 89+ xGF%), but he sort of tapered off as the game went on. We would have loved to see him on the PP1 instead of Keith, but Colliton is in this weird hockey libertarian phase right now. His interference penalty in the third wasn’t all bad though, as he showed that when he puts his ass into it, he can overpower NHL players. Small things.

– I’m only going to mention how bad Brent Seabrook looked because he is a seventh D-man whom the Hawks are too scared to scratch for Boqvist’s sake. He was overmatched by the Knights’s speed all night and didn’t really have a single positive contribution. It’s profoundly stupid that he gets to play over Boqvist, because Boqvist—for all his greenness—is still a bigger threat.

– Erik Gustafsson is coming back to life. He was uneven on the defensive side, which is good for him. His goal was a prime example of what he can do when he plays with talented players. Strome fed him a perfect pass from just above the goal line, giving Gus a chance to skate one way and shoot the other. Let’s hope that he continues to score so the Hawks can get more than a bag of pucks for him at the deadline.

– Brayden McNabb can eat all of the shit on Earth.

It doesn’t have to make sense if it’s fun. If the Hawks continue to commit to the air raid, they’re going to win more games than if they go back to whatever the fuck MAGIC TRAINING CAMP produced. It looks more like individual brilliance than anything systemic, but for now, who gives a shit? Just win, baby.

Line of the Night: “Almost touched it in the restricted area as that puck was coming hot and heavy.” –Eddie O.