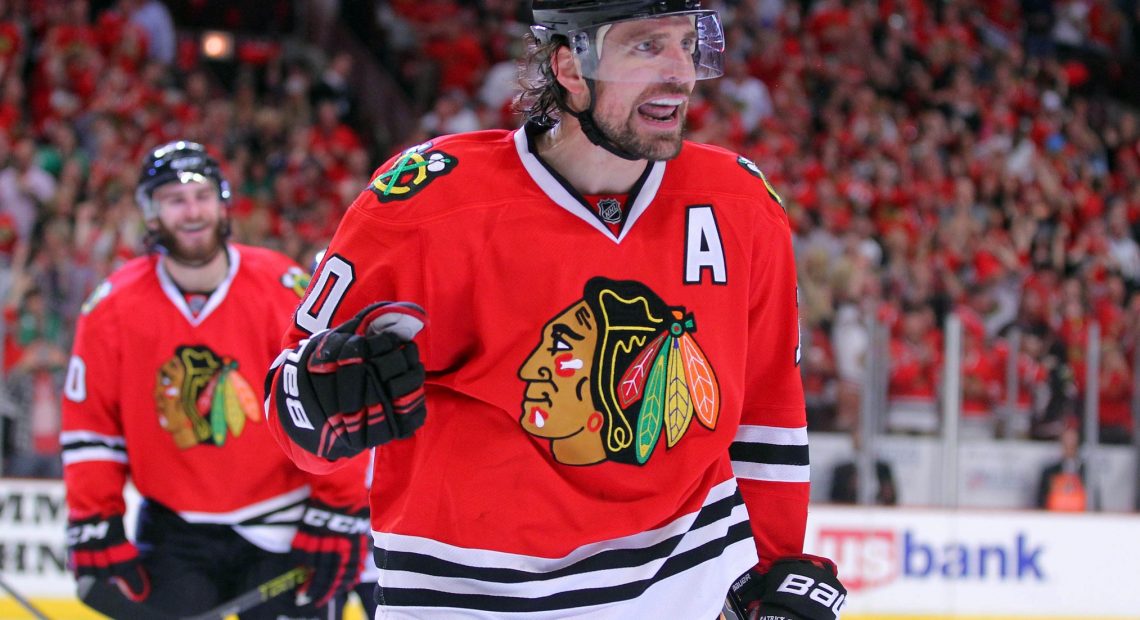 With the Free Agency Faucet now slowing down to an annoyingly audible drip, there’s not a lot to kick around other than the looming trade the Hawks will need to make to get under the salary cap.

For the uninitiated, the Hawks are still approximately $2.2 million dollars over the NHL’s salary cap of $69 million. There have been numerous scenarios fleshed out both here and elsewhere for just how the Hawks can do that. And looming as always is annual self-suck known as the Blackhawks Fan Convention, where John McDonough and Jay Blunk are loathe to trot out players who will not be here come October.

Dale Tallon has piped up this week in stating he’d love to flip some of his youth for a proven scorer, and it’s of little mystery that he’s likely talking about Patrick Sharp, a player whom he famously acquired for a garbage pile of Matt Ellison and a late pick from the Flyers all the way back in late 2005. The Panthers have a ton of young forwards they could swing in a deal, whether it’s Drew Shore, Jonathan Huberdeau, Nick Bjugstad, Rocco Grimaldi, or Vincent Trocheck, all of whom are on their ELCs south of a million in their cap hits.

Adding fuel to the fire was Sharp and Brian Campbell being spotted together at a Cubs game earlier this week. Now Sharp and Campbell are friends, and Mrs. Soupy is a local whom he met during his time here, so it could all just be bros taking in a game during an offseason. But there’s still some smoke around this along with motives on both sides, so it wouldn’t be surprising if this was a bit of undercover convincing of Sharp to possibly waive his NTC to head to Sunrise.

There are obviously other options as Sharp’s $5.9 well exceeds the $2.2 needed to get under the cap, such as punting Michal Rozsival to Detroit who desperately want a right handed shot defenseman, and Johnny Oduya clearly has value in this ridiculous defeseman market. But if the convention comes and goes next with nary a peep out of the Hawks on the wire, it will not be a shock if suddenly Rozy or Versteeg undergo season-ending surgery and a little LTIR skulduggery is used to get street legal.

– Speaking of a ridiculous free agent market drying up, yesterday was Christmas For Bums around the league with Steve Ott ($2.6 million over two years), Scott Hannan ($1 million for one), and perhaps most inexplicably Dan Cleary ($1.5 million with a $1 million bonus for 10 games played) all signing with their incumbent teams, totaling $6.1 million. To put that in perspective, the Hawks signed Brad Richards ($2MM), Peter Regin ($600k), Ben Smith ($1.5MM), Jeremy Morin ($800k), and Antti Raanta ($750K), all for $5.65 million. Granted the latter three are RFA deals where the players had no leverage, but even still, Brad Richards and Peter Regin are the same cost as Steve Ott. While Richards might not work out, in a marketplace gone mad, there’s no way to dispute that Bowman has gotten value.

– In other news out of West East St. Louis, GM Doug Armstrong apparently let irritant Vlad “Don’t Call Me Ziggy” Sobotka walk to the reportedly over a $300k disagreement in salary. Whatever the actual reasons were for this gulf being insurmountable matters not to the Hawks, as Sobotka centered the Blues’ most dangerous line in the spring between Jaden Schwartz and Vlad Tarasenko. Losing him compromises their center depth even with Stastny now in the fold, as Sobotka was a handy, nasty little player who drove possession.

– Kevin Hayes will not be in attendance at this weekend’s Prospects Camp, giving further credence the idea that he’s not at all interested in waiting his turn here to play. His brother is in Florida with almost every other ex-Hawk, and half of his BC teammates are in Calgary, so those seem to be the two likely landing spots if something cannot get worked out here. At least the stairwells at Johnny’s will be poo-free, even if the rest of the facility isn’t safe.

– And for anyone attending prospects camp at Johnny’s West, don’t tell them you read this site or you’ll probably get banned for life. And bring mace.