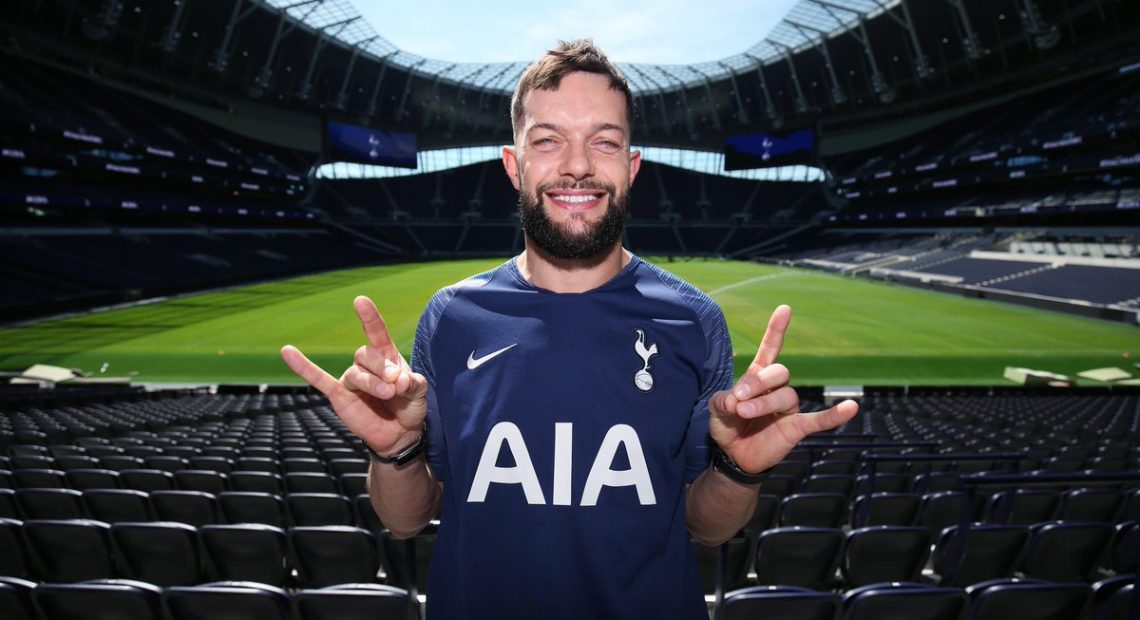 Manchester City: (Adam Hess is a Sky Blue, so we went to him for this…before we fire him.)

CAMPEONES! CAMPEONES! OLE OLE OLE! With back to back Premier League Championships and the best two-year run in the history of the Prem, along with the completion of the straight Domestic Sweep in 2018 it’s hard to say City have much more to accomplish in England. City did need to go on a historic 14-game win streak to close out Liverpool in the Prem last year, but when you got it you got it, and Pep’s fucking got it. It will be interesting to see how City approach the League this year given that they have had that incredible success these past two years.
Where my focus lies for City and Pep is Europe, where they need to finally have a good run in the Champions League and prove that they are for real on the European stage. They’ve almost reached a point where you can set your watch to them bowing out in the quarterfinals. And what’s even more frustrating is that they haven’t actually been beaten in their elimination round in two the last three years, going out on away goals in 2017, getting smoked in 2018 (they went out 5-2 on aggregate to a club with actual European pedigree, mind-ED) and then lost on away goals again in 2019. Pep has never had huge success in Europe, but he does have a UCL title under his belt, so he can do it. It’s time for him to do it for the Blues.
Manchester United: BAHAHAHAHAHAHAHAHAH! If there’s one thing everyone who contributed to this can agree on is that we can have a hearty laugh at ManUre. They’re hierarchy is a mess being flooded with nincompoops, they got bullied into hiring a former player because the current players were so overjoyed not to have to deal with Jose Mourinho’s Eeyore act anymore even though it’s clear he’s way in over his head, and their playing staff simply isn’t good enough. They’ve punted Romelu Lukaku, whom they somehow ruined, so they can turn over the central striking duties to Marcus Rashford, even though he hasn’t proven he can handle that yet. Paul Pogba will be in the biggest sulk you’ve ever seen, which is saying something considering he’s French. The defense might be ok with Lindelof and Maguire, but only just. The midfield blows, the attack is short, and having lived through this nightmare with Liverpool some years back I can’t wait to enjoy it for another season. 5th seems prime for them. One day, a great manager is going to take all their money and straighten out the entire club by sheer force of will. But until that happens, we have to enjoy this slapstick theater while it lasts.
Newcastle: Going down, and sadly it’s what their owner, though not their fans, deserve. This club, given its size and support, should be challenging for Champions League places, and has in the past. But they have one of the biggest dickhead owners in sports in Mike Ashley, who has taken the most passionate fanbase possibly anywhere and turned them off this club. He chased away a genuine class manager in Rafael Benitez–the only reason they got promoted and stayed up the past two season–because he wouldn’t back him with transfers. He replaced him with English football’s version of Randy Carlyle in Steve Bruce, because he’s from there and won’t raise a fuss. They’ll play an awful brand of football, they’ll never score, and down they’ll go. And this time, they may not come back. It’s truly a crime, but maybe regular seasons in the lower divisions will finally chase Ashley off and this club can get the owner it deserves.
Norwich City: They blew away the Championship in the back half of last year, and seem content to stick with the squad that did that. They played some sumptuous football last season, scoring 93 goals in 46 league games. But they weren’t great defensively, they haven’t added to that defense, and now they’re facing Premier League attacks. There is some logic in not getting out over your skis financially upon promotion and then fucking yourself royally should you go back down. This seems to be a long-term project for Norwich, and they’ll play some stuff at times. Maybe they can hang on for 17th, and Newcastle and Palace might keep them propped up amongst the old guard threatening to go down. Still, it’ll be an adventure.
Sheffield United: As far as I’m concerned this team is always managed by Neil Warnock, even if it isn’t. It might as well be. They’ve gone the opposite route from Norwich upon ascension to the EPL, spending 40M on Championship talent to boost their Premier League hopes. They’re also the opposite of Norwich in that this is pretty grind-y, sandpaper-y style here, and you can expect a lot of balls lumped into the box and a lot of hard fouls. They like a kicking in Yorkshire, after all. I would tip them to return from whence they came though, along with Newcastle and Palace.
Southampton: If Bournemouth doesn’t become your second team, this one might. Southampton have specialized in developing talent, playing an entertaining style, and staying afloat by selling that talent to bigger clubs (usually Liverpool). They fucked up by hiring Mark Hughes as manager for a while, but have put that right by replacing him with Ralph Hasenhuttl, or Baby Klopp, basically. Goals might be a problem as they’ll depend on Danny Ings before his glass body breaks again, and unproven-at-this-level Che Adams. Still, Hasenhuttl had this bunch playing over their head when he got settled, and I’d expect that again…to the point where he might be offered greener pastures next summer.
Spurs: (Old friend of the program Greg Boysen chipped in for this one. I can’t fire him)

I will be the first to admit that I am still a novice when it comes to soccer as I only started to follow the Premiere League when NBC picked up the broadcast rights here in the States. I chose the Spurs as my team because of a good friend who grew up in England cheering for them with her father. It did not take very long before I realized they were the perfect team a life-long Chicago sports fans should be cheering for. They have just enough talent to get your hopes up only to kick you right in the reproductive organs by the end of the season.

Last year was no exception. For a good portion of the season, they looked like they were going to keep up with Liverpool and Manchester City make it a three-team race for the title. Then the calendar turned over to 2019 and the team’s lack of depth caused them to slide down the standings and barely hang on to fourth place. Sound familiar?

The cherry on top of last season’s shit sundae was pulling a miracle out of their collective ass to get the Champions League final only to lose it. It wasn’t just that the lost the game to Liverpool (up yours, Fels!), but they lost to them in one of the worst games in European football history!

Will this season be any different? Probably not. They brought in guys like Tanguy Ndombele, Jack Clarke, Giovani Lo Celso and Ryan Sessegnon but their success will still depend on Harry Kane. Yes, Son Heung-min and Moussa Sissoko had good years, but the Liverpool game showed just how important Kane’s health is to the club’s success.

The new additions should add to their overall depth, but they still don’t have a traditional center forward to support Kane and there are major question marks at right-back. The right flank is going to challenge my new found sobriety this year.

So, I am sure will be feeling great about the table at Christmas only to curse my Spurs fandom before I head out to a Super Bowl party in February.

Watford: Watford are one of the weirder clubs around. Their ownership seemingly likes to change managers every season, though they’ve stuck with Javi Gracia again this time around, mainly because other teams wanted him. They generally buy a raft of players, and none of them can dislodge Troy Deeney from forward. They’ve been quiet this time around, though they’ve brought in Danny Welbeck, who has still convinced a large number of pundits over there he can still be good because he banged in a couple goals for England once. How he made that England team is anyone’s guess. He’ll get hurt, he’ll have one good game when he’s not hurt, and that will be that. Other than that, a steadying ship means they’re probably not going too much farther than last year’s 11th place, which for this club is pretty good. Any higher and Gracia is getting poached by someone. They do attack, they can be easy on the eye, and you’ll forget they existed as soon as they’re done playing your team.

West Ham: I’m not sure I want to live in a world where West Ham are acting sensibly. Well, somewhat sensibly. This is still a side that shipped 55 goals last season and still mostly spent their kitty on attack. But that attack, with Felipe Anderson, Lanzini, and now Sebastien Haller looks mighty tasty. They can get bullied by lower, less skilled sides and they’re not good enough to play with the big boys consistently, though they can definitely jump up and bite one or two of them on a given day. Declan Rice is the truth anchoring the midfield, but Mark Noble still gets a place here and he died three years ago. Yet another team below the top four that can be entertaining as hell, in both good and bad ways.

Wolves: They may have a sordid arrangement with super agent Jorge Mendes, but that’s the way the world works and it gets manager Nuno Santo some prime players you wouldn’t think would land in the Midlands. Ruben Neves has stuck around for a second season, which no one saw coming. Raul Jimenez also signed up full-time, which will mean goals which is where teams like this generally struggle. Wolves won’t. Jesus Vallejo on a season-long loan in intriguing, as he could end up boosting the defense something fierce. If you’re anchoring the Spanish Under-21s, there’s something to you. Joao Moutinho is also still here for creativity. Possible best of the rest? Possibly more if Chelsea, Arsenal, and United can’t get their shit straight? Feels like them and Everton might be dreaming big this season.