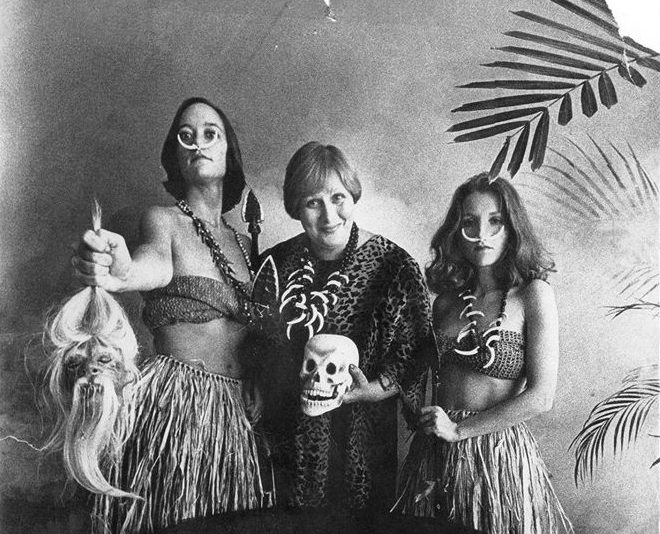 If you’re new to the surroundings here, during the offseason on Fridays is when we tend to get a little loose and write about anything that happens to be on our mind. In Feather’s case, it’s almost always zombies. So here’s our first for this offseason.

First off, she’s the one in the middle. There are two stories I’ve been told about this photo, which was taken well before I came on the scene. One is that it was a Christmas card photo from her company. The other was that it was for an article in an advertising magazine. Either way, it applied to the company my mother ran and owned, which was a placement agency in the advertising world. Every other member of my family was involved in advertising, so if you’re wondering why I’m constantly tweeting about how much I loathe 95% of advertising, this is pretty much why.

Those of you who have lost parents, you know the farther you get from it the harder and harder you have to hang onto your memories of them. Most of mine of Dale Fels are split into two categories. The first is when I was real young and we were basically inseparable. And then the rest fall into the time I started listening to punk and metal and my raison d’etre became trying to piss her off, as all young boys are drawn to do.

Except there was no pissing my mother off. I grew my hair long. She loved it. I started wearing metal shirts. Though she might not have cared for music, she loved the shirts. The more skulls the better. I started playing drums, terribly, and joined a band. She loved that. There was no shaking her. It even got to the point where she told me she was going to make me get my ear pierced before high school, because she thought earrings on boys looked “neat.” I can only imagine what she’d think of my occasionally painted nails now.

Sounds like a pretty cool mom, right? Like far too many things in my life, I was far too big of a butthead to appreciate it before it was far too late.

She put up with all of this with a smile. Well, maybe not “smile.” My brother and I were at the receiving end of endless commands to, “You can go fuck yourself, dabot’ayuhs” (or however that would be spelled). My declining report cards mostly got my father yelled at, because my smartass ways only came from one source. But mostly a smile.

She did so even though she was single-handedly propping the family up. My father’s employment status was always very off-and-on. So mom carried the water most of the time, and thanks to some serious health problems that turned her liver into a cheese block before I was born, she did it with about 20% of the normal energy and strength most people have. So I never knew my mother as a physically, fully functioning woman.

I only got a few glimpses. The last one was freshman year of high school when she took my brother and me to Florida for a week, basically to hang out at Gulfstream Park. After one day at the races, we stopped in a Publix and she started buying all the candy she could find. She instructed us to do the same. This was alien. My mother has always been conscious of what we were eating, sometimes militantly so. But this was vacation.

While most of my personality comes from my father, my social skills are entirely my mother. The male half of the family hated being around anyone who didn’t share their last name or wasn’t the dog. My mother could turn a room full of strangers into friends within minutes. She loved meeting new people and talking to them, which made it a real injustice that her health kept her from doing so almost all of the time.

I don’t know what your Mother’s Day tradition is. I’ll stick to mine, which means I have to clean the house, buy new clothes, play some horses, and yell at my father in absentia. I hope you enjoy yours as much as I’ve come to enjoy mine.

Happy Mother’s Day to all of you moms out there. And all of you who can, make sure you make your other feel special. Those chances aren’t infinite.