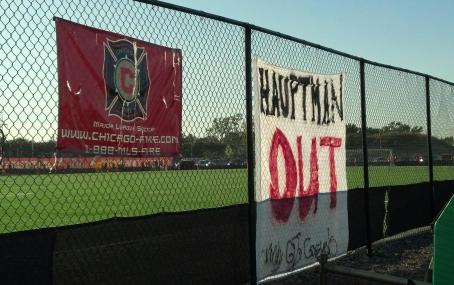 In almost every way that the Hawks were a deficient organization back in those days, the Fire have matched them. They’ve also thrown in a stadium that’s nearly impossible for anyone to get to that doesn’t live in the Western or South suburbs. At least the United Center has always been accessible.

An aloof owner who couldn’t give less of a shit? You betcha! Andrew Hauptman bought the team in 2007, and since he took over the Fire have made the MLS playoffs exactly twice, and one of those was in a play-in game in 2012 so that barely counts. And this is in MLS, where they practically beg you to make the playoffs regularly, if not every year.

What other Wirtz-ian boxes does Hauptman check off? Unavailable? For sure. He lives in Beverly Hills, and certainly isn’t around much. Surly with the fans? You better believe it. The most notoriety the Fire have gotten in two years is when their Director of Communications wrote just about the whiniest, you’re-all-a-bunch-of-ungrateful-morons post on their site. It was PR at its best, let me tell you.

Being overly thrifty with the team? Yeah, got that too. While their rivals have brought in admittedly close to washed up stars or actual US internationals to bolster their roster, the Fire have been on the cheap with their Designated Players, which for those who don’t know are spots on MLS rosters that don’t even count against the salary cap and are specifically designed for teams to bring in bigger talent. How’s that gone for the Fire? Well, one of theirs this year, Shaun Maloney, is leaving not even having completed one season. Because buying Scottish internationals is a foolproof plan. And that’s actually been par for the course for the Fire’s Designated Players, while Fire fans watch Jermaine Jones (this one wasn’t actually their fault, but result was still the same), Michael Bradley, Steven Gerrard, Kaka, Andrea Pirlo, and a host of others go elsewhere. Some of the names? David Accam, Gilberto, Nery Castillo, Sherjill MacDonald, Kennedy Igboananike, Alvaro Fernandez, Frederic Puppo. It’s a virtual murderer’s row, if it was meant to murder your passion for the sport and possibly life.

But it goes deeper than the owner, of course. Incompetent management and development is high on the list too. For years the Fire had former player and local legend Frank Klopas as a manager, whose tactics mainly consisted of punting it up to the striker as quickly as possible. He got one playoff appearance when said striker got really hot (back then it was Chris Rolfe). That was about it. They replaced him with Frank Yallop, who at least had some championship pedigree, having won twice with San Jose. Except the game in this country has obviously passed him by, because when you can discern whatever his tactics are, and it’s a real challenge, it appears to be punt it up to the strikers as quickly as possible while also dressing hilariously bad defenders who are very good at looking each other while yet another opposing striker gleefully gallops into acres of space to slot past an increasingly suicidal keeper Sean Johnson (who I can’t tell is actually good or not, seeing as how he’s going to be coming down with PSD soon). It’s not unlike the Alpo-to-Sutter years.

The Fire haven’t developed any players in their system that fans can cling to. This was a team that did bring through DeMarcus Beasley and Chris Armas back in the day, who both became national team regulars (as well as a couple others). Where LA can boast Zardes and Gonzalez on the national team, KC Besler and Zusi, Seattle Brad Evans and Yedlin (now off to Spurs, yes), and this list could go on, the only young player who even remotely looks exciting in the Fire lineup is Harry Shipp, and he’s misused and not sniffing anywhere near the national team as near as I can figure. And from everything you read, the Fire’s developmental system is criminally underfunded.

Off the field, the Fire are just as big of a mess. Quick, remember the last commercial you saw about them that wasn’t aired during a Fire game? I’ll wait. They have no marketing presence in this city, and thus have become a non-entity. And this is Chicago, perhaps the most multinational city in the country behind New York. Maybe even the most. How can a soccer team in this city be a complete afterthought?

Playing in the boonies doesn’t help. Toyota Park isn’t even really on I-55, and Harlem Ave. is the only way to get there which means you’re going to spend 45 minutes to go two miles whether you like it or not. The stadium itself is nice enough I guess, except it’s far too open which doesn’t lend itself to being very loud or creating that much of an atmosphere even when it’s full, which it almost never is these days. Listen to the cauldron that KC’s, or Portland’s, or Seattle’s stadiums can be because the stands are covered and hold the noise and singing in, and it feels like the Fire missed out on an opportunity. It’s just another day in the park for suburban families, basically.

I know a lot of you who are soccer fans kind of look down upon MLS, and I usually do as well. But I think a part of that is because we simply don’t have a local team that we can all get together and support, or at least one that would be worth it. It’s one thing to follow Liverpool or Arsenal or Munich or Barcelona from afar, but it would be quite another to have one we could go regularly watch live.

One of the things that does attract those of us to the sport is that there is still, or at least the illusion of, a real connection between the supporters and the club. Most clubs around the world give their supporters a voice in their organization. Some even have them vote on decisions, like in Seattle. It’s at least colored like one unit instead of  a business-customer model, even though that’s exactly what it is. Again, maybe we’re all fooling ourselves. What we’re not fooling ourselves about is how the Fire have completely severed that tie. And they’ve made it clear they don’t care.

At least some fans are not going quietly into that good night. Our friends at OTF Soccer have organized a protest for tomorrow’s match. Section 8, the most dedicated supporters in the south end of the stadium, is blacking out their section for those who do go inside tomorrow (though that’s an argument we could have at a later date, whether they should be inside at all). I applaud their efforts to try and take their club back, but remain highly cynical whether it will matter at all.

Hauptman has already seen his investment more than quadruple in worth thanks to MLS’s new TV deal and other factors. And that’s just in eight years. He knows he doesn’t have to do anything, and as long as he doesn’t lose all that much year to year he can cash in whenever he wants for a very handsome profit. Only by turning this club into Chivas East, where simply no one shows up and they’re such an embarrassment to the league that the league is forced into action will something happen. But it feels like there are just enough fans who can’t bear to walk away and parents who just want to entertain their kids to keep the Fire barely afloat enough for Hauptman to do that at his leisure.

I miss it. When the Fire played downtown I went to almost every match. I really treasured having a local club to get behind. I still remember Armas’s golden goal to get them to another Cup final. Man it was cold, and man did I not care. I remember climbing over everyone else in Section 8 and everyone climbing over me to swear at Luis Hernandez as he stood in front of us to take a corner, and his huge smile at the sight. Even if things were to turn around I doubt they could ever leave Bridgeview, and we won’t ever have that “Walk To The Ground” that other supporters get.