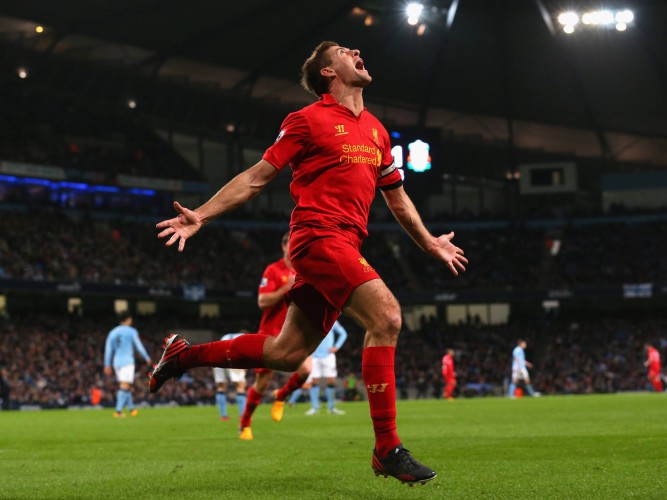 Yeah, I could have put a picture of a player from a club that has any glimmer of hope of winning the Premier League this season. Or even finishing in the top four. But I didn’t, because I can. And because Steven Gerrard is all that is man (except when he really wants to hear Phil Collins at the nightclub). So there.

And yeah, I don’t have to be writing a soccer post today. But it’s my blog and I’m gonna. Because while some revel in preseason NFL in anticipation of the big kickoff in three weeks, while others just sit around and watch the wheel in the sky keep on turnin’ until October 1st, tomorrow is a big day for a minority of us with the start of the English Premier League.

Let’s just go through all the clubs quickly, what they can look forward to and why you might support them if you’re looking to become a fan but haven’t chosen a club yet.

Manchester United – Scum of the Earth. Only support them if you’ve always wanted to know what it’s like to have grown up in the North shore suburbs and then married a totally boring girl with a really rich father. Though they’ll be kind of fun to laugh at possibly this year. Remember when the Wings when from Scotty Bowman to Dave Lewis? How’d that go? Well, that’s kind of what ManUre is attempting here as Alex Ferguson retired and they picked his hand-chosen tea-fetcher in David Moyes, who is clearly in over his head. Still, even though they don’t have a central midfield to speak of, Van Persie will bang in 30 goals to keep them contenders and it’ll be fucking annoying.

Manchester City – Even though they’re as evil as United and bankrolled by shady characters, they’re nouveau evil. And they’ll be far more entertaining this year with a new manager and signing of the summer Jesus Navas to combine with David Silva, Kun Aguero, Negredo, and Jovetic. Also depends on your feelings on Oasis.

Chelsea – Jose Mourinho might be the most entertaining man in the world, but any team that’s going to rely on Gary Cahill, David Luiz, and racist philanderer John Terry to defend is asking for trouble. Still, Oscar-Mata-Hazard behind whatever goofus they play at forward can be simply breathtaking.

Arsenal – They’ll finish fourth, crash out at the first knockout stage of the Champions League, repeat. It’s all they do now. Carzola’s awesome, Podolski is massively overrated, I don’t think anyone else matters. Oh, and my college roommate is an Arsenal supporter, and do you really want to associate with anyone who chose to live with me for two years?

Spurs – A lot less interesting without Clint Dempsey and soon Gareth Bale. But come on, they’re named after a Shakespeare character and there’s some punk sensibility about them. They’re North London’s Blur to Arsenal’s Oasis. Not as popular or successful but a little more depth.

Liverpool – I support Liverpool. You don’t want to be me. I’ll be putting the DVD of the 2005 Champions League Final on loop by November.

Everton – Lost the aforementioned Moyes to United, and he was an expert at dragging this collection of hillbillies far beyond what seemed possible. Going to get worse if he takes their two best players in Fellaini and Baines with him. Replaced Moyes with Roberto Martinez, who got his team relegated last year. But he’s really good with the press so no one thinks it’s his fault. You’ll hear the thud from this club on this side of the pond.

West Brom – Um…..they they’re known as the Baggies. That’s really all I can tell you.

Swansea – It’s a little confusing, as they play in Wales but are in the English football system. Kind of like Toronto, Vancouver, and Montreal being in MLS. Whatever. They’re really cool. They came up under now-Pool manager Brendan Rodgers, and then changed to Michael Laudrup when he left. Either way, they play the most entertaining style outside of the big clubs, and won the League Cup last year (I’m not going to try and explain the difference between Cups and the league right now, but think of it as the conference tournament like in college basketball). Nicknamed the Swans, so you can make tons of Mila Kunis going down on Natalie Portman jokes. Or just think about that scene. Because why not, really?

West Ham – From East London, where you haven’t gone as a tourist. Managed by a complete blowhard who employs ugly football. Yeah, they’re kind of like the Blues or last year’s Rangers or this year’s Canucks. Except without most of the young talent.

Norwich – Their colors are Green and Yellow. We don’t do that around these parts.

Fulham – Just bought by the mustached dude who owns the Jaguars. Their stadium is right on the Thames. They wear very fashionable shirts. They play a pleasing style that really doesn’t accomplish anything. They’re just there.

Stoke – Puke. Though they’re lousy with Yanks (Geoff Cameron, Maurice Edu, soon Juan Agudelo, and Brek Shea who is shockingly already hurt), this is the ugliest team in the league — and I’m not talking about Peter Crouch’s face. Made it to the Prem and stayed there by playing defensively and lumping the ball forward at every chance, or relying on long throws and corners and mauling defenders until the ref simply got exhausted of calling fouls and they scored. Will try and improve the aesthetics this year under Mark Hughes, and it will fail miserably. No one will miss them.

Southampton – Rickie Lambert, their main forward, is cool as he’s had to work his way up through every level of the sport. Just scored his first international goal on Wednesday for England. Are more entertaining than you’d think. Also don’t really matter.

Aston Villa – Cieslak supports Villa. We have enough Cieslaks already, even though they’re all in Norway now.

Newcastle – If you want to be constantly infuriated by how your team is run while joining probably the most passionate fanbase in the land while knowing that everyone else in constantly laughing at you, this is your team. Newcastle have been a clown college as far as I can remember, capable of both ends of the spectrum. Let’s put it this way, they just hired a guy for  what is basically a GM position who has said in the past he only wants that role if he can then undermine the manager and take that position. And they do this type of shit ALL THE TIME. Still, probably the best shirts around.

Sunderland – Jozy Alitdore. What else do you need? Oh, but their manager is a stated fascist. So you’ll have to get past that. Funny story about manager Paolo Di Canio. He played for several London teams. Each time he left one, that team’s official store lost like 20% of its sales, because each week he’d come in and buy dozens of his own jerseys to give to his charities. Or to keep. So he’s a complicated character.

Cardiff – Also in Wales. New owners made them switch from official color blue to red. Who does that? Especially for a club known as “The Bluebirds?”

Hull (now known as Tigers FC) – Simon Pegg once referred to the city as “Hell” in his sitcom “Spaced.” That’s all there is.

That’s it. All the games will be on NBCSN, or NBC, or on their site. It’s going to be a blast. Dive on in. Because Irish breakfasts at 8am when you’re so hungover are awesome. The shit you’ll take hours later will cause you to hallucinate.

Tags: because I can talk about soccer if I want to kickoff soccer