Are You Ready for Some Futbol—Serie A Returns

Let’s be honest—it feels a little ridiculous to be writing about sports right now. We’re in the midst of a long-overdue reckoning with this country’s toxic legacy of racism and police brutality; the economy is a mess and we all know someone, maybe ourselves, affected by un- or under-employment; and oh yeah, a poorly understood and frequently deadly disease is still ravaging the planet. So yes, sports as a diversion or as something to expend energy on seems downright frivolous. To tell you the truth, I haven’t found myself ready or able to write much about them, even though there have still been plenty of things to say even with leagues closed down. I’ve not seen much reason to put my voice out there when there are so many more that deserve to be heard.

And yet here I am writing about soccer. I guess I’m grasping at some sense of normalcy, and while Serie A’s return can’t really be described as “normal” for a soccer season, I’m unabashedly excited to have this little piece of my life back. So I’m going to share it with you, whether you’re interested or not (and Sam’s not here to shut down my Serie A content so BUCKLE UP).

The German Bundesliga has been back for a few weeks now, and La Liga from Spain and England’s Premier League will all be back in action soon too. But, lots of Serie A games will be on the various ESPN channels because, well, they got a lot of time to fill. So what the hell is going on when this league re-starts? The title race is actually interesting for one thing, but we’ll get to that in a minute.

Beginning with the End

They’re starting with the semi-finals and final of the Coppa Italia (which I’m sure is clear that it’s an Italian national tournament). It may seem odd to start with the end of a competition when everyone is rusty, but I think it’s actually a good thing—let the few teams still in it get this out of the way and then everyone can focus on the scudetto (league title) and whatever the hell the rest of Champion’s League and Europa League end up being. So this Friday, Serie A’s version of the Patriots, Juventus, plays AC Milan, who have been terrible. To be honest though, Juve wasn’t playing all that well before the world fell apart, and given that everyone is starting from such a weird place, I guess it’s possible Milan pulls off the upset. But it sure isn’t likely. Juve has too much depth and Milan is woefully short on that. Although, running into the suspension of the season, Maurizio Sarri was using Paolo Dybala, Cristiano Ronaldo and Gonzalo Higuain as the attacking trio, and since that time Dybala got sick with COVID-19 for months on end, and Higuain showed up to training overweight and out of shape, so that front three that had been working so well may not be anymore. Still, I think they have enough talent to turn it on well enough to get past hapless Milan, but it will be interesting to see how their increasing age and slowness plays out now.

Saturday is Napoli-Inter, and as a Napoli fan I’m a bit terrified but also trying to be positive (and I’m just happy to see my fucking team again). Inter had been playing like shit right before the pandemic hit, losing to both Juve and Lazio in league play which basically ended their realistic chances at the scudetto. Napoli, on the other hand, after miserably underperforming for the first two-thirds of the season, were finally pulling their heads out of their collective asses. Our best center back, Kalidou Koulibaly, was hurt but should be back now, which would be a huge boost to our suspect (at best) defense. Thing is, Inter’s coach Antonio Conte loves to play the soccer version of the prevent defense. If Inter scores once (and they need two because Napoli is already leading in aggregate), they’re going to drop back and let Napoli dominate in possession. And Napoli excels at dominating possession but not finishing. They make one dumb mistake that leads to a goal when they’ve had 70% possession—it’s their specialty. So if Inter plays to their strengths they can probably take this, but it’s equally possible that the prevent defense blows up in their face if anyone on Napoli can finish.

Regardless of what happens, these are four powerhouses of the league all in various stages of growth, decline, and rebuilding-on-the-fly, so it’ll make for interesting viewing. And Juventus just might lose, so there’s that.

Now, what of the actual league play that kicks off (HAHA GET IT) on June 20th? The title race is the most interesting it’s been in a few years, and the current wackiness is just another element to that. Juve has won the last eight years and currently is top of the table with 63 points, but Lazio is right there with them with 62. It’s unfortunate because Lazio is the team of, by and for fascists, so you can’t actually root for these fuckers, even though they have the league’s top scorer in Ciro Immobile, who is entertaining as hell to watch. Anyway, it’s at least competitive and Inter is still making some noise in third. Atalanta, hands down the most fun team to watch and the league’s best Cinderella story, is fourth and it would be fantastic to see them pass Inter and make the latter sweat for the last Champion’s League spot next year (year? Season? Whatever length of time…what is time anyway?).

From there it’s a multi-car pileup in the middle of the table, but it means on paper the last Champion’s League spot is in play, plus the Europa League spots are up for grabs. Roma and Napoli are both in the running, as long as there’s no dramatic collapse on either side. Roma had also lost one of their best players to injury, Niccolo Zaniolo, who should be back before this whatever-end-of-a-season is over. In short, this season was already exciting and more unpredictable than usual, so seeing how it all sorts itself out should be a fun time in an already sports-starved summer.

Italy took a serious curb-stomping from the coronavirus, and their hardest-hit areas were the northern regions where most of these Serie A teams hail from. Atalanta in particular is the home team of Bergamo, the northern city that was the epicenter of the pandemic for a long time, as if we needed another element added to their story (and it’s another reason why you absolutely have to root for them in Champion’s League, outside of them playing against your team of course). No matter what happens, it’s a huge emotional lift for the country to have its calcio back. Remember, when Hank Scorpio asked Homer his least-favorite country, France or Italy, he followed up Homer’s answer with an astute observation—nobody ever says Italy. 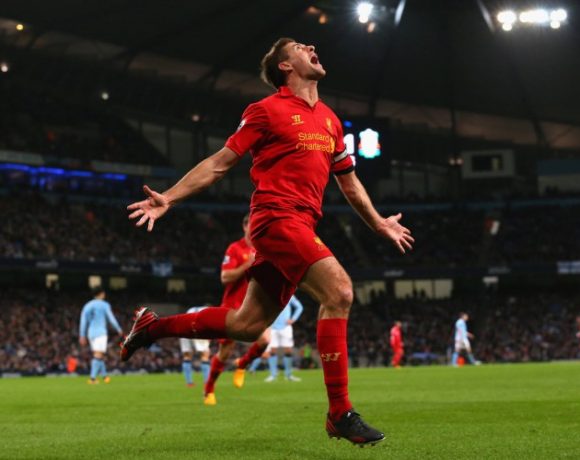 Yeah, I could have put a picture of a player from a club that has any glimmer of hope of winning the Premier League this season. Or even finishing in the top four. But I didn’t, because I can. And because Steven Gerrard is all that is man (except when he really wants to hear Phil Collins at the nightclub). So there.

And yeah, I don’t have to be writing a soccer post today. But it’s my blog and I’m gonna. Because while some revel in preseason NFL in anticipation of the big kickoff in three weeks, while others just sit around and watch the wheel in the sky keep on turnin’ until October 1st, tomorrow is a big day for a minority of us with the start of the English Premier League.