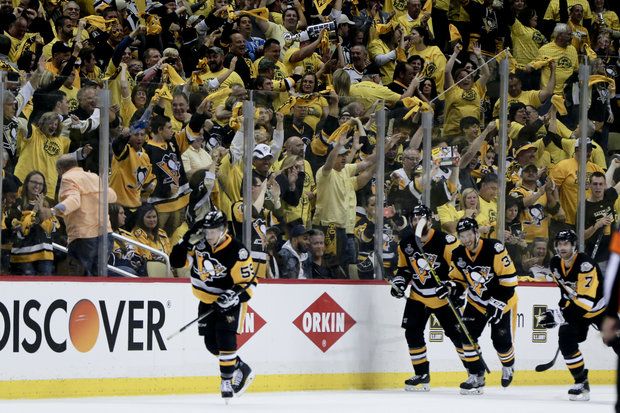 Once you get past the Predators’, or more to the point their fans’, constant bed-wetting over the refs (and really a lot of people’s), or the heavier amounts of bullshit we saw last night when the game got out of reach, there is something of a fascinating clash of styles going on here. And also an excellent example of how in hockey there really is only so much you can control, and it’s rarely enough to ensure things swing your way.

I guess you could call it that… except it’s probably not the Penguins plan to get throttled for huge swaths of the game and then pray that Matt Murray can bail them out of it. If it is… well bully for them.

Once again last night, the Penguins couldn’t do all that much with the Predators stepping up their pressure on them most of the night. The boards were closed off, and really only Domoulin and Schultz had any idea how to get around it and not always successfully. The Preds piled up 32 shots in the first two periods, and you can’t really do much more than that. The Penguins had seven shots in the second, and none of them were from inside the circles, which lets you know how firmly the Nashville hand was pressed against their forehead while they swung their black and yellow arms wildly in vain.

But again, this only really matters if all things are equal in net, and they most certainly have not been. And with the speed and scoring talent the Penguins have, all they have to do is figure out how to get themselves open a few times and they’re going to make it count. In the 3rd, three goals sparing off a Pittsburgh player simply bumping the puck past a pressuring Nashville forward. First it was Hainsey right off the opening facefoff, Then it was Cullen beating a squeezing d-man to the puck low and springing Kessel. Then Kunitz repeated the trick with Josi on his back along the boards and simply sending it out to center where Malkin picked it up.

This is what Pittsburgh tried to do in Game 1 but couldn’t do successfully, because normally even if you do force the puck past the pinching d-man along the boards, and you have to win the race in the first place to do that, his partner has been retreating and cleaning it up or so has the third forward. That didn’t happen last night.

But these breaks don’t matter as much if Rinne isn’t opening up a seven-hole on himself to give away a lead his teammates had earned. Or serving up a rebound to Guentzel that was so plattered he might as well have had a napkin slung over his forearm and holding a bottle of wine. Malkin beat him clean and easy, though Malkin is going to do that when allowed to waltz in to within 20 feet.

The Penguins are only going to need four or five odd-man rushes per game to score multiple times, and the way Murray is playing that’s probably going to be enough. At this point the absence of Ryan Johansen is becoming clear, because for all their dominance at evens, they have two even-strength goals. At some point you have to turn your possession into chances and twine-twinklers, and the Preds are lacking inspiration. And that might be too much to overcome.

In essence, the Preds have done everything right. But thanks to the usual injury toll at this time of year and their goalie turning back into the goalie that he’s kind of always been when faced with real firepower in the spring, they’re up against it. I’d still fully expect a win in Game 3 for them in front of a crowd that’s going to be positively frothing, and then we’ll see how things look.