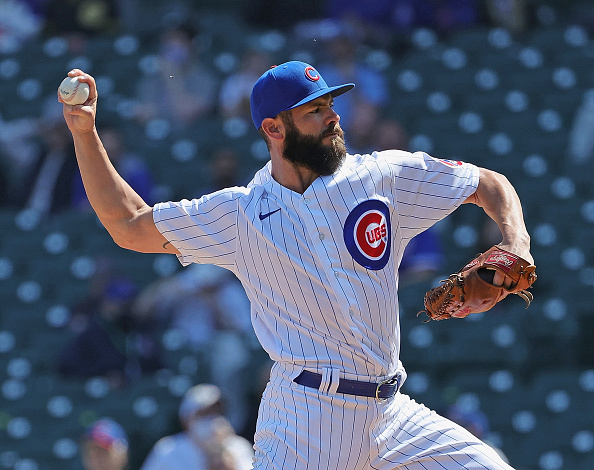 It started out a complete disaster, but the Cubs were able to figure it out against the Pirates to start 2-1 on the year. The bullpen went from looking atrocious to making me feel cautiously optimistic. The hitting went from non-existent to being shouldered by the World Series champions who couldn’t be found offensively last season. We were able to rebound, so I’ll take it for now. Let’s look at each of the games:

There is truly nothing better than starting the season off the Cubbie Way—playing like inexcusable garbage. Kyle Hendricks allowing a 2-run homer in the top of the 1st inning just for laughs. Throwing only three strikeouts in four innings. All Cubs fans were given a grim reminder of how bad our pitching could look like without Yu Darvish at the helm.

Joc Pederson had a great chance to show all Cubs fans what he could do with a bases loaded situation in the 1st, whacking the ball to left, but unfortunately the wind was not with him and he only ended with a sacrifice fly. Additionally, Willson Contreras had a very nice double steal play, and Anthony Rizzo was able to sac fly him home. Rizzo was responsible for one of two (2) total hits today for the Cubs, BUT WHATEVER YOU DO, RICKETTS FAMILY, DON’T RE-SIGN HIM.

By the 4th inning Hendricks was pulled, meaning we got to see a whole plethora of bullpen pitchers, which was a horrible experience. Brandon Workman started us off for the first time this season, where he was throwing 91-93 mph fastballs. And balls that hit the ground in front of the plate. And wild pitches. Eventually he got switched out for Rex Brothers because he couldn’t throw any strikes, but Brothers certainly didn’t look any better.

Jason Adam was next up in our bullpen as he attempted to fastball the ball past any Pirate up to bat. Even with that pitch hitting 95 mph, Jacob Stallings was able to figure Adam out as he was able to rope the ball to left, extending the Pirates’ lead to 4-2. Winkler had some time at the plate as well, surviving the longest out of everyone in the bullpen – a whole 1.2 innings! Chafin, Tepera and Mills also pitched, but at that point the game was literally at the 3-and-a-half-hour mark and you guys are telling me that you weren’t turning the channel to watch Yu Darvish and the Padres?

The Cubs did score another run thanks to the second of two (2) total hits from the Cubs—a Contreras sacrifice fly to send Bote substiution Eric Sogard home, but by that point it was too little, too late.

The Cubs offense looked a lot better Saturday, even without leadoff hitter Ian Happ out of the lineup because apparently, it’s better to shelter Happ from lefty pitchers than give him experience to help him improve against lefty pitchers. Love it.

Javier Baez was legitimately not pulling our leg about his need for crowds cheering and in-game video to help with his play. He had a huge game tonight unlike any we’ve seen from him for at least a year, with two hits, a run, an RBI, and 2 stolen bases.

Jake Merisnick, Happ’s substitute at center field, also had a great game offensively. He had a run, a hit, and a Baez sacrifice fly RBI, ending the day with a .250 batting average.

Heyward made me look like an idiot saying he wasn’t the player he once was, because he had a great game as well: 2 hits (one a home run), an RBI, and a .875 OPS. Finally, let’s even give Kris Bryant a hand because he was our other home run hitter of the game, also responsible for an RBI and leading the team with a 1.042 OPS.

To the pitching! Even though Arrieta was looking a little shaky at first, he was quickly able to bounce back and survived through 6 innings, twice as far into the game as Hendricks stayed in on Thursday. He struck out five batters and ended the game with a 1.50 ERA. He also allowed 6 hits, and though the Pirates would make contact off of him pretty regularly throughout the game, the Cubs defense behind him was solid and kept the Pirates to only one run.

Although Arrieta had a good pitching game, good Lord he is awful at the plate. Watching his first at-bat was an atrocity to my eyes. He was just so behind each swing and both times he put himself in a three up, three down situation. His second at bat he at least took a ball, but he was still so slow to swing, just going through the motions. Both of his strikeouts ended innings and it made me understand why people advocate for a DH.

We saw Workman again out of the bullpen, and he looked much better Saturday than he did on Thursday. He ended the top of the 7th with a wild pitch in the dirt again which bounced away from Contreras, but luckily the throw to first base made it in time, showing once again the Cubs’ defensive prowess against what is essentially a minor league team. Take the wins as they come, I guess.

Andrew Chafin looked better, too. In the 8th, he had 3 strikeouts to end the inning. Additionally, we saw the first appearance of Craig Kimbrel this season, who also had 3 strikeouts to finish the game. Even though the Pirates are projected to be the worst team in the entire MLB, hopefully both pitchers can continue to build off of these good outings.

This game was Zach Davies’ Cubs debut since getting traded to us in exchange for Yu Darvish and Victor Caratini. He survived 5.2 innings and had 5 strikeouts, 3 walks and one home run allowed late in the 6th inning.

The Cubs’ offense continued to be good today, although that doesn’t really mean a ton when you’re playing the Pirates; it’s more like the bare minimum required of you as an MLB team. Kris Bryant RBI’d Ian Happ to score early in the first. Happ also had a nice solo homer in the 3rd. Joc Pederson, now the king of sacrifice hits, RBI’d Anthony Rizzo in the first as well when he grounded out to first base.

Ex-Cub Duane Underwood Jr., who embarrassed us completely on Thursday, collapsed completely by the bottom of the 6th, letting Bryant and Baez hit off of him. The Pirates’ fielders didn’t really help much either. Just like we remember the Pirates being.

Rex Brothers was a bit terrifying out of the bullpen, allowing three hits and a run, but luckily a Bote/Baez/Rizzo double play kept the Cubs in the lead by one run. The other bullpen pitchers, however, were actually fine. Winkler only played a third of an inning after Davies was pulled thanks to looking a little shaky his third time through the batting order. Winkler was able to get the final out of the 6th inning and gave up no hits or walks. Tepera played 1.1 innings and only allowed a walk; although hitters were getting contact on his pitches, the Cubs defense was able to bail him out.

Finally, Craig Kimbrel had another solid outing closing out the game with another three-up, three-down inning and two strikeouts. It gives him something to build on after his tough performance last season.

To wrap it up, I’m not sure what’s going on with David Bote. They made a huge deal about how it was DAVID BOTE’S TURN to play full-time at second base, but he’s only played one of the first three games to completion. Would like to see what happens when he’s in there a full game, honestly. Is Eric Sogard really any better?

With the season in full swing, the Cubs will continue their homestand with a 3-game series against the Brewers Monday-Wednesday. The Brewers just finished opening their season against the Twins, who beat them 2-0 yesterday and stomped them 8-2 today.