Now that our Winter of Discontent is in full swing, the bitterness and anger only seems to be rising from everyone. Both owners, players, and especially fans seem like they could boil over at any moment. Maybe that’s what this whole thing needs. Only then does it feel like something will be at risk. But there’s a couple themes from both sides that they keep putting out there that just don’t add up.

One thing we hear from the owners in response to the current system and the proposal of a new system from the NHLPA is that it’s based on revenues growing at the same rate that they have the past few years. They say this it is impossible to continue and that when it stops their current share of revenues would send the league into the dumper.

I think it’s pretty creative, in a sick way. Because what would be better at slashing revenues then this lockout and draining interest from your sport? It’s a popular tactic of whatever the opposition party is in Washington or perhaps your state capital (if it’s not such an entrenched party or combine as it is here in Illinois). You rail against how the current government doesn’t work. You then spend your time making sure government doesn’t work to prove your point by opposing anything that comes your way and gridlocking everything. Then you can run to get your party back in control by showing everyone how the current government didn’t work while ignoring that you had a major hand in making sure it didn’t. Don’t worry about getting overly political here, both major parties have used this tactic a lot in the past decade. They’ll probably be doing it when half the country is living in a Hoover-ville soon.

That’s what it feels like the NHL is doing here. Saying that revenues won’t continue at this rate and then making sure they won’t for at least this season, and probably the next. While it does seem to be shooting yourself in the face to prove that you need plastic surgery, no one has ever accused the owners of not being self-destructive.

-On Twitter I posted the Deadspin article about the owners’ PR efforts with Frank Luntz. I’m sure the Republican nature of his firm or causes will anger some, I’m sure some will just be angered that any time is being wasted on this kind of bullshit, and that’s more fair. But it’s not surprising that the NHL would do this, and if they’re letting the firm do all the research or whatever, it’s not really wasting time from what could be negotiations. This is what organizations do, and it really shouldn’t make you any more angry than you already are.

Obviously, the idea of a “shared sacrifice” will be seen through by any hockey fan who doesn’t stick his hands in fans for fun. The owners aren’t asking to share anything or give up anything at the moment that they don’t already have. But I’ll admit that phrase sounds better than “Gimme Gimme Gimme And I Can’t Get Enough.”

What I think will bother most about stuff like this is that no fan really cares who wins the PR war. And winning the PR war doesn’t get anyone closer to an agreement. The owners don’t care if they’re viewed like The Grinch…only uglier, meaner, and with aged cocks that assuredly don’t work and thus they’re taking it out on us. They’re rich. That’s the ultimate middle finger to those who don’t like you. Meanwhile, if the players did care so much about us, we’d be a lot closer to a deal. They wouldn’t have hired Don Fehr, because the next fan he cares about will be the first. He doesn’t answer to us, he answers to the players. If he destroys the interest in the league, it won’t affect his paycheck in the slightest.

I think we’d all just prefer they meet behind closed doors and they can tell us when they have a deal. Until then, maybe there should just be a gag order for everyone. That’s what angers fans the most. 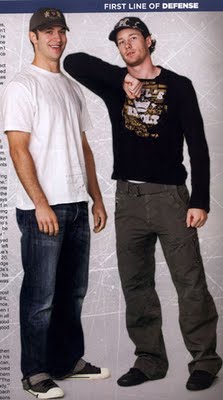