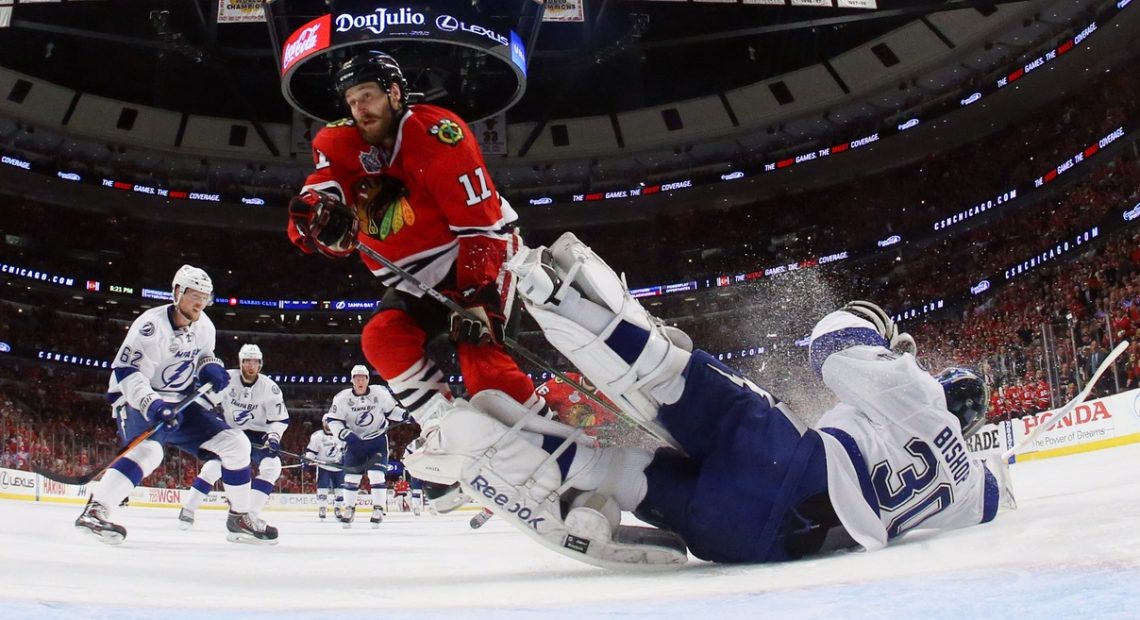 In a bit of positive holiday weekend news, word was released that Andrew Desjardins was brought back to the tune of $800,000 for two years. Now if only he’d change his number back to 69 to give back Jeremy Morin 11.

When Ben Smith was traded for Desjardins straight up at the deadline, there was some trepedation, as it appeared to be a clear salary dump for a guy with minimal reputation here other than decimating Jamal Mayers two years ago. While he was thought to be little more than a facepuncher, it was more than a pleasant surprise that he Marcus Kruger, and Andrew Shaw formed arguably the most consistent line the Hawks rolled out night after night while taking Kruger’s customary dungeon shifts. And assuming that Joel Quenneville resists the urge to put Andrew Shaw at center on any regular basis, they should be able to resume duty as one of the top checking and energy lines in the game if and when Marcus Kruger is re-signed.

The cap hit is extremely friendly while still being a $50K raise for Desjardins, and his agent wasted no time in getting the sentiment into the bloodstream that his client left money on the table. Clearly in this situation every cent helps, especially when retaining a productive role player.

— This crossed the wire earlier this morning with little fanfare, but it’s worth taking note of:

Defenseman Johnny Oduya has been waiting for #Blackhawks to clear cap space. We'll see if that continues.

Once again, it’s a clear case of a player knowing where his bread is buttered. But again, every cent counts, and how much of a shave Oduya is willing to take to stay is still up for grabs. Based on some of the stupid money is out there, it’s not far fetched to think Oduya could garner upwards of $5 million per season for four or even five years (Hello Brooks Orpik), a more than marginal raise from his current $3.375. But the way the Hawks have things structured, it’s not realistic to pay him more than Niklas Hjalmarsson’s hit of $4.1, particularly when he famously told the world he made enough money. If Oduya stays for a perceived discount, you can bet it will come with a full no movement clause, which seems more than fair. But the key will be the term, and anything more than two years would be reckless, particularly with Brent Seabrook now in a walk year.

— The longer Marcus Kruger goes unsigned, the itchier things will get. Realistically for a bottom six center he can’t be paid more than around $2.5 per. But if a team really wanted to reach on what Kruger is and pay him like a cheaper second line center, it would only cost a second round pick in compensation to the Hawks. Kruger skates some of the hardest minutes in the league and is invaluable as a human shield, allowing the top 6 to get the choice zone starts. But how much of a premium can the Hawks afford to pay for that? Something to keep an eye on.