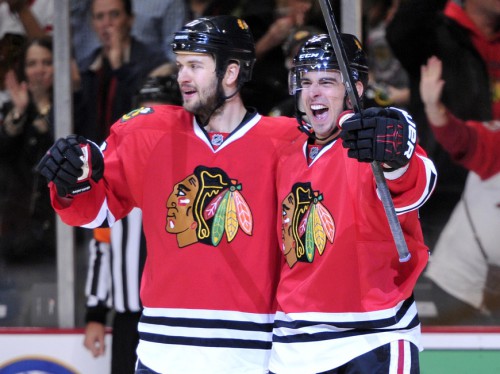 There is a certain satisfaction in this matchup and coming out clearly on the better end of it–though the talent gap played a huge part. But here you have the possession-conscious Hawks and the possession-dismissive Leafs, and look what happened. The Hawks pretty much rolled them, even though it was a tie game for about half the occasion. It’s like a vision of where the sport was and where it is and where it’s going. Or maybe I’m just feeling like reading too deeply into things, because fuck me this Commodore Perry IPA is good.

After a pretty nondescript 1st period, the Hawks slowly exerted more and more authoritah’ over proceedings and eventually choked the Leafs out in a Million Dollar Dream. Oh sure, there were a couple moments in the 3rd, but not the onslaught the Hawks had been seeing at times this season (a malady that did affect them early last year as well, but was covered up by OT and shootout wins instead of losses).

Let’s get to bulletin’!

-Well, let’s get the obvious out of the way. Brandon Pirri had a goal and an assist. We all want to see more. It’s not that we think he’s the answer. It’s just that we all think he’s proven enough to be given a chance to see if he is. I’m sure Q is harping on when he got caught from behind twice in the neutral zone, but his nifty pass to Nordstrom that led to a penalty against the Leafs, his pass to Kostka which showed the utmost patience, and his hands to score, it’s all screaming to be given more.

I’ll just give Q the benefit for now in that Pirri missed a good chunk of camp, and hence is being worked slowly into a bigger role as he’s taught what is expected from him. But only because it’s Saturday night and I’m in a good mood.

But still, Pirri-Bollig-Nordy didn’t crack 10 minutes. Kitchen was on before the 3rd talking about how the Hawks pace was so much better because they could roll four lines now with their new set up. But that’s clearly bullshit. The bottom six is basically the same except for a swapping of Saad and Bickell, which was happening anyway.

I can’t stress this enough. IT’S OCTOBER. This is when you can find out who can do what and what you have to go get. If Bollig and Nordy can’t be trusted to take 3rd period shifts in a game that’s pretty comfortable, than get them upstairs and get them outta here.

Yes, Pirri’s relative Corsi (rated against his teammates) is still a team worst among the forwards. But it wouldn’t be in between Hossa and Sharp, where he should be.

Because Jonathan Toews getting 23 minutes of time in the season’s third week is not acceptable.

-I don’t know why Nick Leddy can’t get more time, because every time he had the puck tonight he pierced the Leafs right through the belly. Meanwhile, Oduya was nothing special, and that’s with not blaming him for the goal because there’s nothing he could do about that bounce. If the Hawks are so concerned with their pace, why can’t the one of the guys who pushes it the most out there more?

-Though on the other side, much like the Soldier Field turf, the UC ice makes a play on behalf of the home team at least once a game.

-If your retinas need to burn, I’ll tell you the Saad-Toews-Hossa line was a combined +25 in Corsi tonight.

-I remember when I was only just following around Hawks message boards in 2007 and when the Hawks got the #1 pick, there were a lot who wanted James Van Riemsdyk. While he hasn’t had the career Kane has, he’s still a hell of a player and I wonder what numbers he would have if he could play with Kadri instead of the dead-ass Bozak and the ultra shoosty Phil Kessel.

-Hey look, Crow’s SV% is .922. Remember like a week ago when people were worried about him? Yeah…