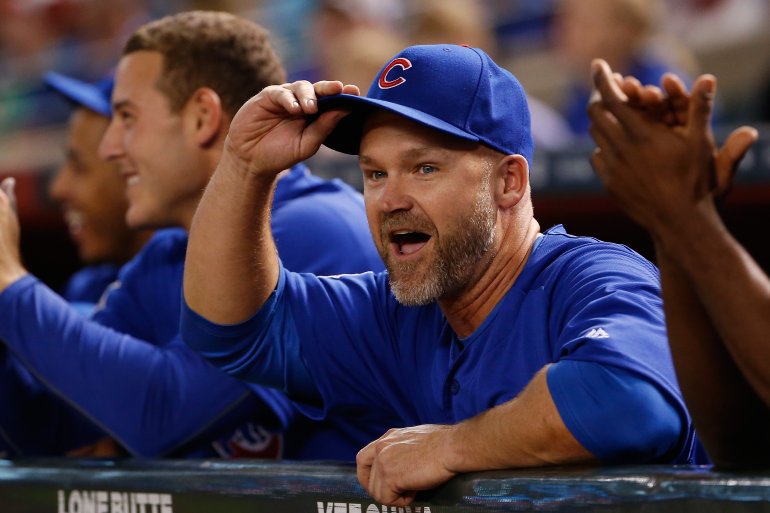 It doesn’t fit for this front office to say they put on a show to justify making the choice they wanted to make the entire time anyway. Maybe they did, but while they don’t always get it right, I would be hard-pressed to ever accuse Theo Epstein’s regime of not being thorough. I don’t think there’s any move they’ve made where they were just tossing a football around the office, never even looked at a sheet or screen, and said, “Yeah sure whatever.”

So I don’t think the two interviews for David Ross were just for the sake of doing it because they gave Joe Espada two interviews. I don’t think they were just making it seem like they were doing their due diligence while they actually just got drunk with Ross and made fun of ESPN personalities (which probably did happen in addition, to be fair). My guess would be they put Ross through a pretty heavy ringer to be comfortable giving him the manager’s job.

Does the familiarity help? Sure, of course. But that goes both ways. The only thing I’m sure of with the Cubs’ manager search is they wanted a guy who will run the team in the same vision they have for it as they put it together. That doesn’t mean they’ll be calling down to the dugout during the game and telling Ross or whoever else they might have hired what to do. But when they put together this team this winter, whatever and however that’s going to be, anyone would have a clear idea of how they want the pieces moved on the board. Whether that vision is correct or not…well, that’s what a baseball season is for.

So yeah, they probably want their bullpen used more creatively than 7th- and 8th-inning guy, and then closer. Especially as it’s likely to have at least two guys–Alzolay and Chatwood–who can be used for multiple innings. They probably want that in close games, not just mop-up situations or when there’s no other option. They want a different environment for younger players, as this one kind of stalled out for some (assuming they can actually play). They probably don’t want Albert Almora leading off ever again. They want things to definitely be tighter than they were this year.

But for anyone to say, “Oh Ross will do this or that. Or he’ll bring this or that to the clubhouse…” We don’t have any idea. He doesn’t have any idea. Neither does Theo. We can guess and they might have a stronger inkling thanks to the interviews and their relationship with him, but no one knows.

Sure, he doesn’t have any experience. But he also spent his entire career as a backup catcher, which means he spent most of his career watching from the dugout, seeing how things play out. And if he thought he wanted to be a manager at any point, which he obviously did, it was probably in that context at some point long ago.

Yes, he has a relationship with some of the players, and all of the core. Maybe that means he holds them accountable better. Maybe it means he thinks he’s still their buddy. Maybe it means he knows exactly how to get through to them and immediately get on board and bring the rest of the team with them. We don’t know, and probably won’t until July.

Maybe he sets a harsher tone. He was a great clubhouse leader as a player. I mean, everyone says so. Except that all of those things that made him so are things we never saw. We take their word for it. The volume of it makes it probably true, but how does that play as a boss? He acted as something of a conduit from the manager to the players in both Boston and Chicago, so he’s not unfamiliar. But I’m not going to take him yelling at Anthony Rizzo one time in spring training as a basis for how he’ll run an entire team for an entire season and more.

But the tangible stuff? We don’t have any idea. Can he get players to change their approach at times? A few hitting coaches have failed at it now, so why will Ross be any different? He could. He might not. We don’t know. Can Ross make Quintana discover a new pitch or new way of delivering one of the ones he has to find more success? Maybe? Who knows?

Ross will probably look like a good manager if he gets a starter to slot either right below or right in the middle of Kyle Hendricks and Yu Darvish and definitely above Q and Jon Lester, along with two more bullpen arms. I bet he looks pretty smart then. Oh, and Ian Happ hits out of center and Nico Hoerner is ready to take over at second by no later than Memorial Day.

All we can say for sure is that in those interviews, the outline or vision Ross had for how this team should look and be deployed lined up with what the front office sees. But we don’t know what that vision is, they’re not going to tell us. We’ll find out during the season.

My fear is that Ross’s name and esteem amongst Cubs fans and media is part of the appeal, in that he’ll buy some breathing room and time for the rest of the organization in case they have plans they know we won’t like. That’s probably some of the appeal, but not all.

But in the end, we don’t know. We’ll fill this vacuum of nothing with our thoughts and opinions and most of all our guesses because there’s nothing else to do and you can’t leave a vacuum a vacuum, duh. But you don’t know. I don’t know. They don’t know.