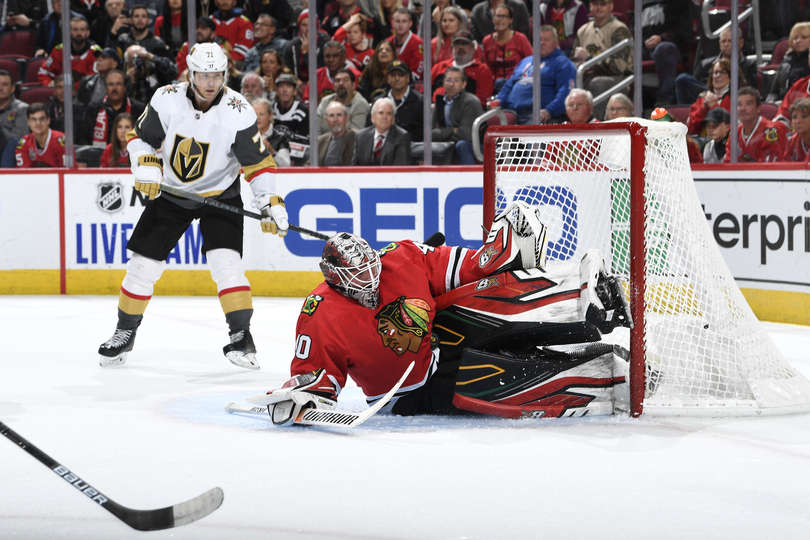 For the first 30 or so minutes, the Hawks looked like a true NHL hockey team, if not a playoff-bound team. They kept pace with the Knights’s unbelievable-if-you-weren’t-watching-it-with-your-own-eyes speed, a team that has had the Hawks’s number since their inception. But nothing gold stays, Pony Boy, and even the most valiant effort from Robin Lehner couldn’t deliver the Hawks’s first win over Vegas. Still, there’s a lot to be hopeful about. Let’s suss the hope out.

– Robin Lehner was incredible tonight, stopping 33 of 34 shots, including a Tony O-esque pad stack in OT. He was calm and fluid throughout the entire game, even as the Knights ratcheted up their attack in the final 30 minutes of the game. It’s nothing more than a bummer that he let Holden’s shot squeak through the five hole in the waning minutes. Without Lehner, this is a route. Thank Christ NYI had no more use for him.

– Kirby Dach scored his first career goal off his knee. Aside from that, he looked like the future centerman the Hawks need him to be. He nearly had two goals, as he was wide open in the crease for a Garbage Dick pass that was blocked. Dach also set up two excellent chances for teammates: one in the first in which he entered the zone with power, corralled a Flower poke check, then peeled off the near boards for a pass to Gus that turned into an A+ Kane chance; and another chance for DeBrincat in the third that should make whatever equipment you have move and shake. He chased down a loose puck in the offensive zone and tapped it to a streaking Top Cat, who just missed getting it by Flower’s toe.

His only real boners were immediately after his goal, when he fell asleep in his own zone and rolled out the carpet for Jonathan Marchessault, and then turned the puck over after Lehner stopped that shot. His minutes were extremely low thanks to a glut of special teams play, and you hope that Coach Kelvin Gemstone will switch out Nylander for him at some point.

– Olli Maatta was outstanding tonight. He set up Dach’s goal entirely on his own, taking a quick feed from Strome, curling behind the net, and then firing a shot-pass to a wide-open Dach. The fancy stats don’t flesh it out at all (34+ CF%, 24+ xGF%), but for once I can confidently say “Fuck your analytics.” Olli Maatta was relatively impressive tonight, and I would like to sign up for this newsletter.

– This was a vintage performance from Duncan Keith. He was everywhere and for all the right reasons. He led the Hawks in ice time by almost six whole minutes (28:03 total) thanks to a mysterious Connor Murphy injury. His 46+ CF% is a result of the Knights swirly-ing the Hawks in the third, as he had a positive share through the second. He made a strong feed to Saad in the third that Saad couldn’t finish, too. If this is the version of Duncan Keith we’re going to get regularly, hope springs eternal.

– Brandon Saad FUCKS. Well, until his failed clear late in the third, which is probably a harsh assessment per se. He had multiple chances that a locked-in Flower denied, and he killed off a ton of time by himself on the PK just before the 4-on-4 in the second. He and Carpenter were nails on the PK tonight, and Saad and Kubalik have obvious chemistry which would probably go really, really well with a quiet Jonathan Toews.

– Dominik Kubalik was all over the place and is proving once again that the Hawks’s European scouting team is a gold standard. We all sort of expected the offensive potential (as he showed with his 10 SOG against Washington), but the defense looks like it might be just as stout, the best evidence of which came off his slot-pass breakup toward the end of the third.

– Outside of the shootout goal, Jonathan Toews had another piss-poor outing. He and DeBrincat should work in theory, but they don’t work in practice. I know it’s cherry picking here, but his 37+ CF% and 30+ xGF% were much more indicative of his play than, say, Maatta’s numbers. He and DeBrincat are ghosts out there, which might be more worrying for Toews’s performance than DeBrincat’s. Either way, it might be time to put DeBrincat with Dach and Kane, and give Toews Saad and Kubalik.

–Are we all sure we want to give Strome money and years? Yeah, he’s playing on the wing, and yeah, Colliton is jerking him around on the PP1 in favor of Alex Nylander for some dumbass reason, but he’s been awfully quiet lately. Not ready to throw him out yet, but I’m curious about when the curtain comes up on him.

– Any time Erik Gustafsson wants to start being the 60-point defenseman everyone was tripping over their own genitals to remind us he was last year would be nice.

– Connor Murphy spent most (or all) of the third in the locker room for undisclosed reasons. If he’s out of any extended period, I would like to see Adam Boqvist in his spot rather than Slater Koekkoek.

–  Brayden McNabb can suck the shit directly out of my ass and call it Golden Corral. His knee on Kane was filth.

The first half of this game was fun, but the Hawks got run over by a better team as the game went on. While there’s a lot to be excited about after this game, there’s still a lot to improve upon.