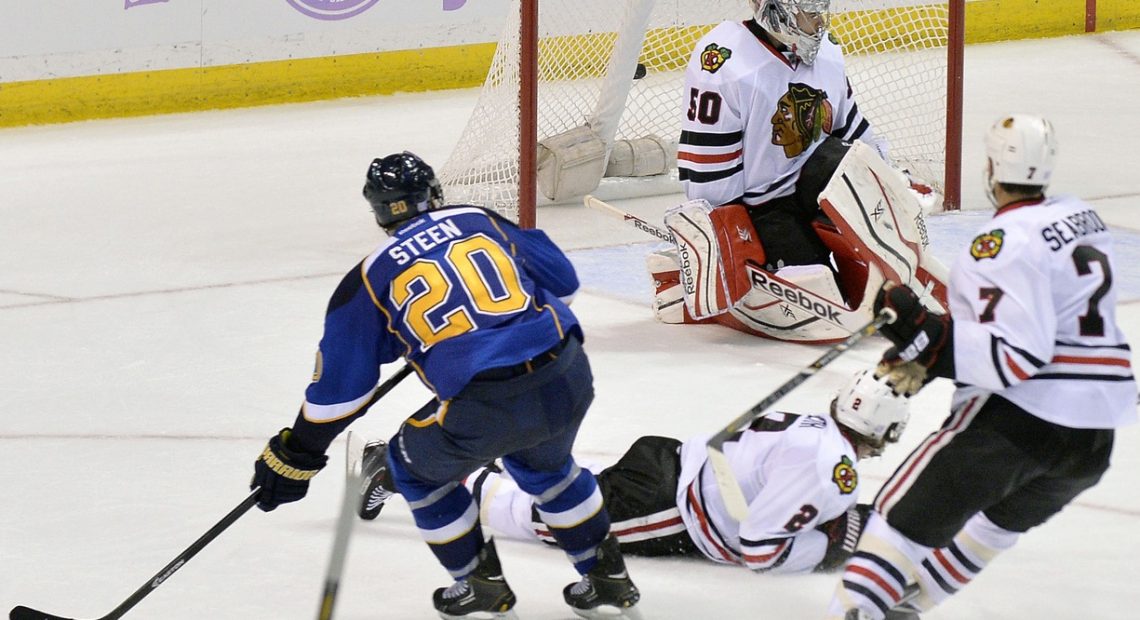 So much for any kind of streak to start this season. Rather than wait a month and a half until after the season starts, the Hawks walk away without a point for the first time after only 3 games this season, and on their first trip out of the United Center.

Things didn’t start out that unpleasant this evening, as the Hawks actually dictated play in the early going of things, which tends to be an oddity for games at DrinkScotch. Perhaps having the toothless rabble’s attention divided with an elimination game a few blocks away dampened what’s usually an atmosphere that can best be described as Redneck Rampage, but the Blues found the puck in their own end more often than not.

Fortunately for them, counterpunching is a specialty, and it has to be when they’re that defensively oriented without a ton of top flight offensive creativity. A rare Marian Hossa neutral ice turnover gave Vlad Tarasenko enough room to make the Hawks pay and give the Blues a lead one would have thought they would just sit on. But a quick call after the fact put the Hawks on the advantage, and Patrick Kane was able to deposit a whiffed Sharp one-time attempt that skittered its way onto Kane’s tape.

In the midst of trading chances in the second, an offensive zone hook from Bryan Bickell naturally resulted in ending up in the back of the Hawk net on a pretty deft deflection from Cap’n Fighty, but once again the Hawks would answer on the advantage shortly thereafter, this time with the puck finding its way to Toews’ tape in a crease scramble.

Despite continually pressuring the Blues in the third, a late pinch by Brent Seabrook and a quick counter by Alex Petrangelo left Duncan Keith alone to defend a 3 on one, and Alex Steen, who had drawn two penalties already, muscled a shot just under the heel of Crawford’s glove, which he got a piece of but not enough, leaving only 20 seconds left. Blues 3, Hawks 2. It sucks, it stings, but it’s early. Bullets not originating in East St. Louis