Clendening With The Trolley 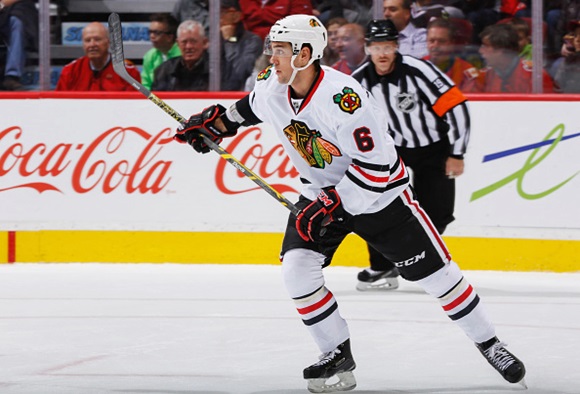 You may have missed it last night, happened kind of late, but the Hawks sent Adam Clendening to Vancouver, apparently the official city where the Hawks dump the d-men they don’t have room for, for another blue line prospecting in Gustav Forsling.

You knew something was going to happen as soon as Clendening got three games with the Hawks and then was sent back to whence he came and never heard from again. It’s been well-established that you either break into Quenneville’s Circle of Trust immediately or you never do. That’s why TVR’s return is hotly awaited, that’s why Nordstrom is now a fixture in the lineup, and that’s why Clendening is headed west even though his skill-set looks remarkably like van Riemsdyk’s.

Clendening has his faults. He doesn’t have what the Hawks need more of on the blue line, and that’s feet. He makes a good first pass to make up for it, is bigger than I thought he was, and has a pretty nice shot from the point. But the Hawks already have Seabrook and Hjalmarsson who also don’t move particularly well but can pass their way out of trouble. This would seem to be a hallmark of van Riemsdyk as well, assuming he recovers from two major leg injuries in a year. Same goes for Rundblad. Clendening isn’t offering anything too different.

The Hawks also had a total logjam in Rockford among d-men. Dillon Fournier, a 2nd round pick after all, is stashed in Indianapolis partly because of it. With TVR, Rundblad, probably still Stephen Johns (although we know how the Hawks treat prospects who miss a lot of time with concussions) and I’ll go ahead and guess Ville Pokka ahead of Clendening in the eyes of the organization (I’m going to guess that they’re going to want to justify the Leddy trade in every way possible and push this Pokka kid as much as they can), it made sense to cash out now before he is waiver-eligible next year.

Still, you wonder about the asset management again. Clendening was a 2nd round pick. He spent three years in the organization, and is turned out for a kid who was a 5th round pick. This is after Brandon Pirri, another 2nd round pick who spent four years in the organization, was sent out for another 3rd and a 5th. Jimmy Hayes and Dylan Olsen combined for Kris Versteeg, and I guess I leave that one to you if that’s fair value, as Olsen was a 1st rounder (though a Tallon one) and Hayes a 2nd. Jeremy Morin was a 1st round pick, the only asset in the firesale of 2010, and he went for a d-man the Hawks won’t play.

I guess you can give the Hawks credit in that they’ve self-scouted well enough that they know who they can lose and not have it really come back to haunt them. But it’s not like they’re fooling anyone else either into overpaying for prospects they’ve already figured out aren’t going to contribute much. At some point it has to be asked about the developmental or even scouting of the Hawks. Right now on the roster, there are few Stan Bowman picks. Saad, Nordstrom, Teuvo, Shaw, Rundblad was a trade, and Erixon was a trade. You can throw Raanta on there as well, as he was a signing. Nordy and Teuvo were very recent call-ups. Granted, there’s not a lot spots open for Stan’s picks, and this is better than it was. And yet you’re not totally filled with confidence about the front office’s ability to plug holes with their own picks. Especially when they keep taking up spots that should go to kids with dunderheads like Gorilla Salad and Bollig.

But to me that’s not the real issue here. The real issue starts next year when the Hawks are going to have to fill holes with kids from the organization, and they’re going to have to play for a coach who is only interested in finished products. What was it about Morin’s, Pirri’s, Hayes’s, Clendening’s time in Rockford, all multiple years, that still left them unsuited for Chicago? Some of the blame lies with the players themselves of course. Maybe most of it. Are there different messages and approaches with Danault, McNeill, Johns, Dahlbeck, Hartman and others? Or do they just have different attitudes? Are they going to be more polished when they simply have to take up full-time roles? Will Q care either way?

Even after this year, you’ve still got prime years with “the core” left (though not too much longer with Sharp and Hossa, though Keith’s freakish physical ability extends his a bit). Will it be wasted because coach and front office can’t get on the same page? Or because the front office just hasn’t supplied the big club in the way they’d like to think they have?

Anyway, back this afternoon with tonight’s preview.