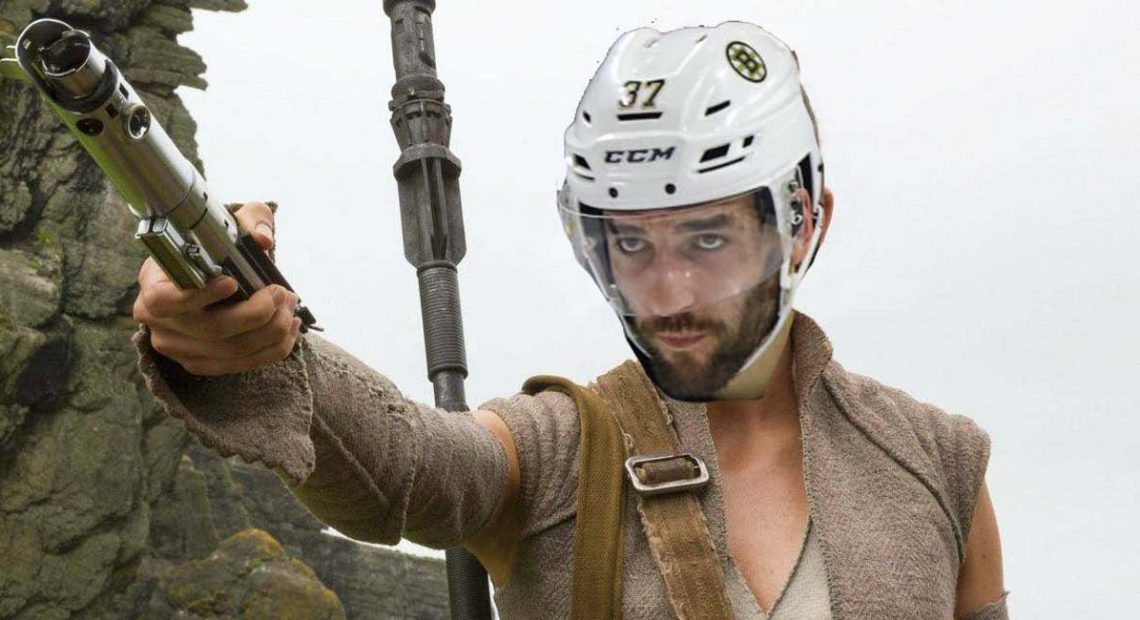 I’m not here to tell you it’s going to be ok. This post is not meant to make you feel better, because that’s not possible at the moment. If you need that, there’s a variety of narcotics out there for your perusal. Other than that, I can’t help you.

No, it’s dark right now, and I’m just here to provide any flash of light you would have any hope of clinging to. Ok, I mean I know you can’t really “grab” light, but at this point in our journey together things are fucked up and we’re just going to have to go with mixed metaphors because I can’t do any better right now, all right? If you thought the Hawks missing the playoffs for a second straight year was bad, you didn’t know how the world can always find a rug to pull out from under you even when you were sure you were standing on concrete.

So yes, because all the Sharks are either broken or stupid, and their coach is both, we face the possibility of either another Boston championship, David Backes getting a ring, Don Cherry being happy, or…well, I’m not even going to mention it by name. I refuse to give it that power until I absolutely have to.

So here we are, and what’s to be done? Well, here’s one thing: Focus on Patrice Bergeron. For he is good and holy, and deserving of all that’s coming to him.

During the height of Hawks fandom’s downright psychotic push of, “Toews is better than Crosby!,” I liked to needle some by suggesting that Toews wasn’t even Patrice Bergeron. Bergeron has two extra seasons on Toews (he’s played in three more but missed almost all of one through injury), but they’re essentially equal on goals and Bergeron has one season’s worth of points more than Toews. Bergeron has had something of the same renaissance as Toews just did. Bergeron was mostly the do-it-all foil for David Krejci’s offensive game. But after a 53-point season at age 31, Bergeron responded with two of his best offensive seasons afterwards, including this year’s career season by a mile at 33. Toews did the same at 30, and if he can do the same as Bergeron into his 30s, life will be sweet indeed. And both took more grief from their home fans when they weren’t scoring than was ever sane.

Bergeron has been the game’s smartest player for a while now, and he could probably make an argument that his four Selke Trophies aren’t as many as he deserves. Over the past 10 years, if you’re metrically inclined, there has been no better forward than Bergeron. He leads everyone in expected-goals percentage and Corsi percentage over the past decade. And if you think that’s due to playing on a pretty good team for that time, he’s also top in relative-Corsi and fifth in relative xGF%. That’s over a full 10 seasons. Quite simply, no one has pushed the puck in the right direction and into the right places more often than Patrice Bergeron.

While a lot of checking centers get their rep like Backes and Kesler and others for being overly physical and yappy, Bergeron has never needed that. He’s just in the right place, has incredibly quick hands, takes the puck, goes the other way, no muss, no fuss. While Bergeron is hardly a shrinking violet, he just doesn’t need to be all that physical. He’s where he’s supposed to be before you are or even realize where that is, and then you’re behind him.

Bergeron has never made an ass out of himself in the press or on the ice, like his running buddy Marchand (who has to be said is his own wonderful player overall, though). The long-running debate is how good would Marchand be without Bergeron, because they’ve hardly spent a minute away from each other. But go down any list of his teammates over given years and watch their metrics fall off a cliff when not out there with #37. Quite simply, he is the Bruins’ best forward ever, and if they want to argue about it they know where to find me. You can shove John Bucyk and Cam Neely straight up your Dunkies coffee-soaked ass.

Bergeron very well might be going for his third ring right now to match contemporaries Toews and Crosby if all his organs hadn’t fallen into his legs in the 2013 Final (you forget the Bs were a Chara post away from probably sweeping that series). Toews and Bergeron battled each other to a standstill that round until basically neither one of them could walk. A second one is not even close to what he probably deserves.

So in this morass of misery, where it feels like the whole summer might be ruined, cling to this. It’s something. Run for the stronghold of Patrice. It’s the best I can do right now.