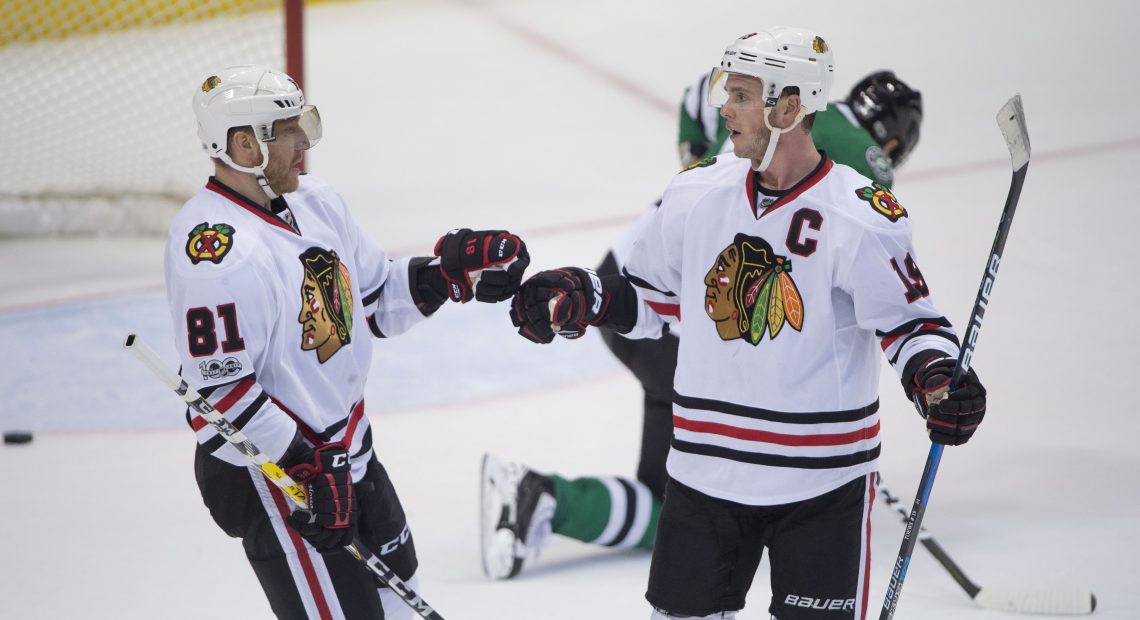 We like to discuss the slog of January/February hockey. Maybe complain or bemoan is more accurate. The games can be very forgettable or unentertaining and ultimately meaningless. If more games were like Saturday’s between the Hawks and Stars, we probably would find another dead horse to wail upon.

Perhaps Lindy Ruff is the key ingredient as he lets his team open the game to allow multiple odd man rushes, breakneck scoring opportunities and frantic scrambles. Then you see where his team is at in the standings and you understand why more teams don’t incorporate that type of style.

But it makes for fabulous viewing.

Obviously, in the grand scheme of things this game and its two points won’t make a huge difference for the Blackhawks; maybe it will for the Stars in the end. I’ll be damned, though, if you weren’t on the edge of your seat for the final 15 minutes of this game as both teams traded scoring opportunities back and forth. Both teams were desperately pushing to win this game and their speed was matched at both ends of the ice.

It’s what makes hockey so engrossing and addicting.

–Gustav Forsling is a 20 year old NHL defensemen. Despite what many now believe, Duncan Keith and Brent Seabrook didn’t come out of the womb with the ability to always make the right decision, make an accurate breakout pass 99% of the time and always have their stick in the shooting lane at the NHL level.

Quite the contrary, Saturday’s game by Forsling brought back to mind games that Seabrook and Keith both experienced as they grew into the the players they are. The key differences were that A) no one was watching and B) the Blackhawks weren’t contending for a top spot in the playoffs.

Forsling was outstanding in the offensive end last night. He created scoring opportunities with his lateral quickness and quick shot. He was rewarded for it by scoring his second goal of the year where he opened up a shooting lane by supporting his partner (Seabrook). (To be fair, Seabrook played just as big a role of opening the shooting lane as his patience with the puck allowed Forsling to be in the position he was.)

Forsling was not good in his defensive end last night. He allowed several scoring chances for the Stars by either making a bad first pass or waiting too long to make his decision. He was rewarded for it by getting stripped by Tyler Seguin behind his net and allowing Dallas to take a 3-2 lead with 10 minutes left in the third.

So there’s the encouraging and the not so encouraging. This is what happens when you’re developing young defensemen at the NHL level with actual skill. They’re going to make glaring mistakes and they’re going to make plays that drop your jaw. If the organization wants to build the next wave of good, young Blackhawks (particularly on defense) while also competing for a Stanley Cup, these are the sort of performances they have to live with.

–Of course, TVR scored the game winning goal so this all becomes moot as he will now play 40 minutes a night for the rest of the season.

–Fighting is generally stupid but when Dominic Roussel gets his face blown up, I will never complain. Also, those are the type of fights I hardly have a problem with as it happened within the flow of the game, not scripted and against two guys who probably hate each other’s guts. Totally fine by me.

–Ryan Hartman, once again, with another strong performance. He got the Hawks on the board and then saved the eventual tying goal by knocking a loose puck away from Jamie Benn who had a wide open cage in the final minute. His fancy stats also reinforce the eye test as Hartman was on the ice for 15 scoring chances for while only 3 against.

As we’ve started to see, Hartman can bum slay with the best of them. So long as he gets cushy matchups and doesn’t get benched by his coach for REASONS, we should continue to see these types of efforts.

–They will be writing poems about that pass Artemi Panarin gave to Patrick Kane in the second period that sprung him on a breakaway. With his back turned, Panarin gave a no-look backhand pass that hit Kane right on the tape while also being just far away from the Dallas defender so that he couldn’t break it up.

–That’s enough for today. The Hawks have taken 4 of 6 points on their road trip thus far and could easily have at least 5. It’s a good start and the final three games should get a little trickier. First up is Coach Haagen-Daz and the Wild on Wednesday. Enjoy the Super Bowl.