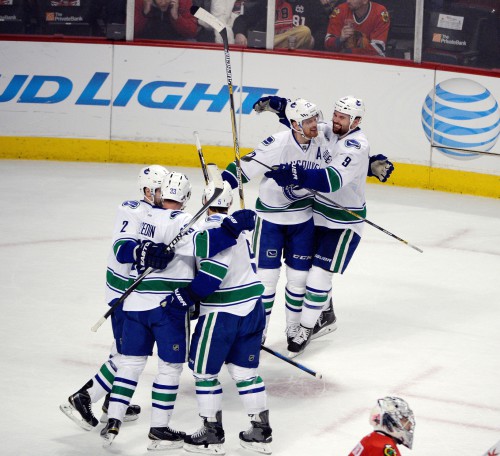 I thought it was pretty cute when the Hawks pulled off two of their better wins this season last weekend against division opponents. I thought it was encouraging that they did it by stripping things down to basically their most elemental level, i.e. being defensively secure and concentrating on their breakouts and taking the chances when they showed themselves.

Little did I know the Hawks would go total fucking prog rock for the first two games of a homestand that could have spun the meaning of this season. It went from three chords and three minutes songs to everyone getting a fucking solo, which is why the Hawks have basically coughed up a hairball for at least 4.5 periods of the six on this homestand already.

What’s funny, is that they still have the abundance of individual skill to pull, or nearly pull, a rabbit out of any hat they find. Because there wasn’t a plan or anything. Two came on the power play, and you’d be tempted to say things are fixed there. But really? One was a 6-on-4, and the other off a juicy rebound. At varying points Kris Versteeg was on a point. So was Patrick Kane. These aren’t creative solutions. This is throw-shit-to-the-wall. But when you have this much skill on your hands, it all just might work.

So those two power play goals and a dry heave from Eddie Lack saved a point the Hawks didn’t deserve. They spent the first two periods completely ignoring their defensive responsibilities, and then when they got the puck to the other end they wanted to see how Vegas revue they could get. The evening basically started with Kane turning down a chance to fire from below the circles so he could pass to a covered Sharp. And then Kane ended up with three points on the night. How perfect.

-I don’t even know where to start. So let’s start with the Canucks opening goal, where Sharp was left to deal with three Canucks along the boards while three Hawks fled the zone, including Rozsival. WHAT THE FUCK WAS ROZSIVAL GOING TO DO OUT THERE?! Of course, this was after Oduya missed Sharp with a breakout pass and Richards has to bail him out, but then Richards went on walkabout. This gives you some sense of what the Hawks defensive coverage was all night.

-David Rundblad was pretty much awful for the first 40 minutes, capped by a turnover in his own zone and then waving at the ensuing rebound that Horvat gleefully slammed home. So who’s feeling good about the Hawks’ defense right now?

-Has any goalie put on a better performance when giving up five goals than Crawford? It felt like all of his 31 saves were miraculous.

-Or maybe the highlight was not one single forward decided to track Daniel Sedin, that’s Daniel Sedin who’s been a premier scoring winger for like 13 years now, as he streaked down the middle of the ice to receive a pass from Burrows. That’s good stuff right there.

-Or how about Rozsival in overtime not really covering either Thing 1 or Thing 2? Who’s feeling good about the Hawks’ defense right now?

-Bickell and Shaw a combined -16 in Corsi tonight, or -20 when score adjusted. Good thing they took Teuvo out of the lineup, huh?

-Kris Versteeg looked like someone who has never played the right side before. and certainly not with Shaw and Bickell which is probably why Q went to the blender before most of us had finished our first beer. If Versteeg’s hand is fucked, and his entire game is basically based on his hands, how long is it going to take before he finds it again?

-The Hawks entire bottom six was underwater again. Against a Canucks team that isn’t all that possession-heavy. Take that for what you will.

When the Hawks hit the ice again, they could be 10 behind the Preds and six behind the Blues. They can say seeding doesn’t matter and they’ll make whatever work, except they’ve never really done that. There was a chance here to make things interesting. They may have already blown it.