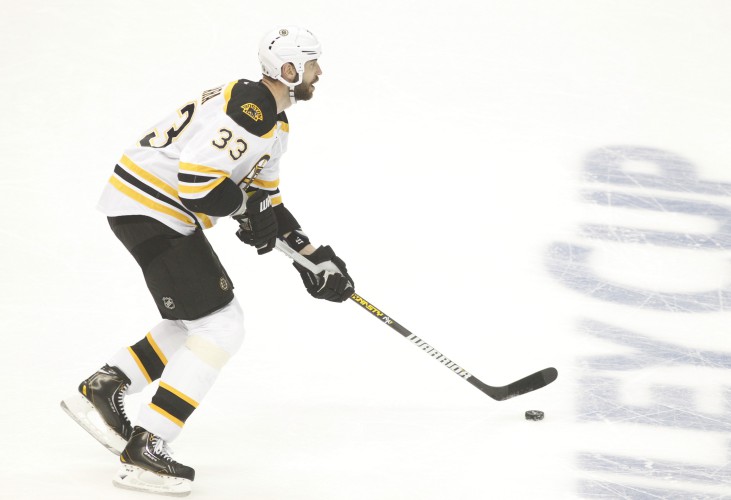 While we highlighted the Kings unpleasant nature on defense, the Bruins bring that and more. This is a group of men who look like they belong in a bar brawl somewhere and try to turn their zone into one. But they also come with some of the warts that the Kings had as well, just not as large.

There’s no point in going any further without talking about the 6-9-sized problem on the top pairing, and that’s Zdeno Chara. This could be the biggest difference (ha ha) between what the Hawks just saw and what they’re about to see. While the Kings’ #1 d-man Drew Doughty is a great player, he can be erratic and wild and reckless at times. The Hawks got to take advantage of that. They will get no such breaks with Chara on the ice.

Ryan Lambert covered this excellently today on Puck Daddy, and I don’t know that I can add much more. While Chara doesn’t pile up as many points as some of the other defenders in the league, that doesn’t mean he doesn’t dominate pretty much every game he’s involved in. He comes with a nasty streak as well, and with that size it’s a horribly frightening package.

While Chara isn’t a burner, considering how big he is he’s a pretty good skater. The thing is he doesn’t have to skate all that well, because his reach pretty much takes up half the rink when he’s standing still. You can’t beat him to the outside, and he can keep you from doing that without losing position to the middle.

What we should keep an eye on is that Chara usually plays on the right side, his offside. However, it hasn’t been unusual for him to flip to the left side with Seidenberg going to his offside if the occasion calls for it. With Patrick Kane and Chara’s Olympic teammate Hossa coming down the Bruins left, we might see this. Julien also tries very hard to get Chara out against whatever is deemed the most dangerous threat, even on the road. Don’t be surprised to see someone hustling off the ice at the UC after a draw to get Chara out against Toews and Kane if that’s what Julien wants.

And then of course there’s the issue of his Boomstick of a shot, which someone is going to have to step in front of at some point. Have fun with that.

Seidenberg usually partners Chara, and I can’t really get a handle on him. Does he benefit from playing with one of the best around or does he help Chara become that? He’s a good skater with nifty hands, but let’s just say I’d like to see what he comes up with when the Hawks target him. Obviously, he has the best safety net around.

The Bruins second pair features Andrew Ference and Johnny Boychuk, and to me a lot of the series will be determined on whether the Hawks can get at these guys. Chara can’t play both of the top lines, which means Hossa and Sharp will likely see a lot of them. There’s not a nastier pair to play against, as both have the snarl of Killion’s dog upon seeing another dog. However, they don’t move all that well, just as the Kings second pairing didn’t either. Hossa and Sharp especially can get on these guys before they’ve made a pass and cause some turnovers, and they might struggle to catch up. They’re positionally sound, and turn the are in front of Tuuke Nuke ‘Em into a Slayer mosh pit. Whatever rebounds are lying around are going to be hard to get to, and will exact quite a price. But it needs to be done, especially if the Hawks can get them scrambling a bit and out of position. But the B’s forwards do an excellent job of helping out, letting all their d-men sag into the slot to close off shooting lanes.

Rounding out the B’s blue line is Adam McQuaid and Torey Krug. They’re pretty sheltered, as they’ll hover around 10 minutes per game. McQuaid is another behemoth who plays as if he just saw someone grab his sister’s ass, but also isn’t the swiftest of skaters.

Krug has been the playoff surprise. He only had three regular season games to his name before he poured in the goals against the Rangers. This is where all the speed from the blue line the B’s get comes from. However, Krug is still only 5-9 (maybe) and playing in only his 13th game total in the NHL come Wednesday. I’m sure Q is going to target him at home as much as he can, hopefully with Bickell or Hossa or even Saad who can all maul him a bit. It’s the only chance they’ll get to do so.

It’s an imposing outfit, and one that nullified the Penguins’ arsenal hardcore. However, the Penguins have never needed much of an excuse to lose their shit, and once Bergeron took Crosby out of it, Malkin pretty much quit and Iginla looked as old as people feared he might as well as Neal looking pretty confused. The Hawks scoring depth is a little more sure. Essentially, the Hawks will either expose the lack of mobility from Ference and Boychuk and McQuaid, or they will lose this series. Because it’s highly unlikely they’re going to be able to scratch out much against Chara with Bergeron in front of him.