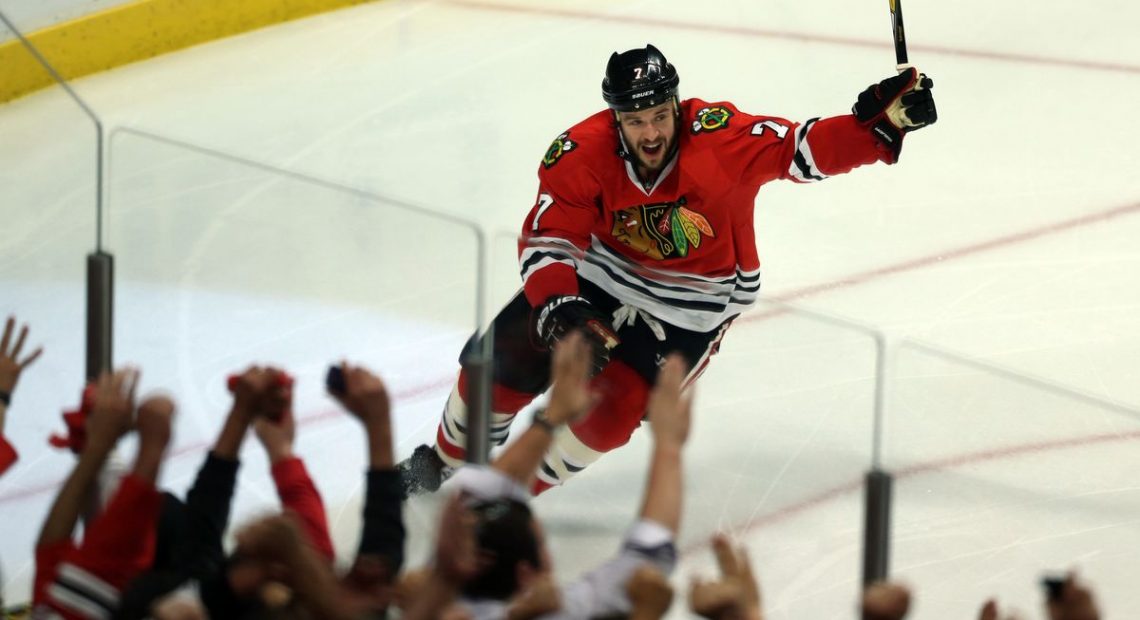 This has been a long time coming, and it’s something that has needed to happen for myriad reasons, but that doesn’t make it any less heavy.

Brent Seabrook is calling it a career.

We have talked boundless amounts of shit about Brent Seabrook for years now, but it came from a place of expectation and past performance that made it so disappointing to see such a pillar of three Cup winning teams that it became difficult to watch that toll finally be exacted on the back end of things. Make no mistake, Brent Seabrook is one of the greatest Hawks ever, and his #7 will assuredly hang in the UC rafters sooner rather than later even if he should have never been able to wear it in the first place, as a dual ceremony with Chris Chelios is all but guaranteed.

Seabrook was the first real draft selection of a rebuilding process that was now a generation ago, with Mike Smith selecting a powerhouse of a kid out of the WHL 14th overall. And he fulfilled basically every bit of that promise, becoming the “Diet Chris Pronger” he was billed to be – a shithouse of a body on the blue line who could still skate and produce offensively. He was never as nasty or dominant as Pronger, in fact no one in the NHL ever really has been before or since, but his outlet passing was right on par with him, and was a tremendously under appreciated aspect of the Hawks Cup era.

Seabrook was the emotional leader of that locker room, famously helping Jonathan Toews get his shit together in Game 5 of the 2013 series, one which Seabrook would cap off in OT of Game 7, scoring arguably the greatest goal, and certainly most cathartic, in franchise history. His flare for the dramatic wasn’t limited to just that one instance, though, with huge OT goals later that playoff year in the final against Boston in Game 4, and then in Game 5 in 3OT against the Predators in 2015.

He and Duncan Keith formed a defensive pairing that would span generations, not only of this team, but in the NHL. Seabrook’s retirement brings to a close the longest stretch of concurrent teammates both in Chicago sports history, and in NHL history, as they were the first defensemen to ever play 1000 games together, which they kept adding to. And while Keith ultimately emerged as the more dominant player, but there were stretches where Keith seemed lost or disinterested, and Seabrook provided the anchor on that unit, particularly in 2011 and 2012, which allowed Keith to regain his form and win another Norris trophy. Seabrook’s inclusion on the Canadian Olympic team may have been derided as being Keith’s cabana boy, but he absolutely deserved to be there among the sport’s best.

In the end, the injuries just became too much. Aside from what was known – the countless concussions, the recent hip and shoulder and back and whatever surgeries – was what he was likely playing through during those long playoff runs that were never made public. And despite an ultimately Quixotic and futile effort to keep playing even after time, his body, and the organ-I-zation told him it was probably time to be done, he clearly kept trying until it was extremely clear that it wasn’t going to happen anymore. And now with this finally out of the way, he can enjoy time with his family, and the rest of us can enjoy an outstanding career without having to worry about the cap ramifications of a ridiculous contract.