Brent Seabrook Completes His Surgeries, Might Be Darth Vader Now 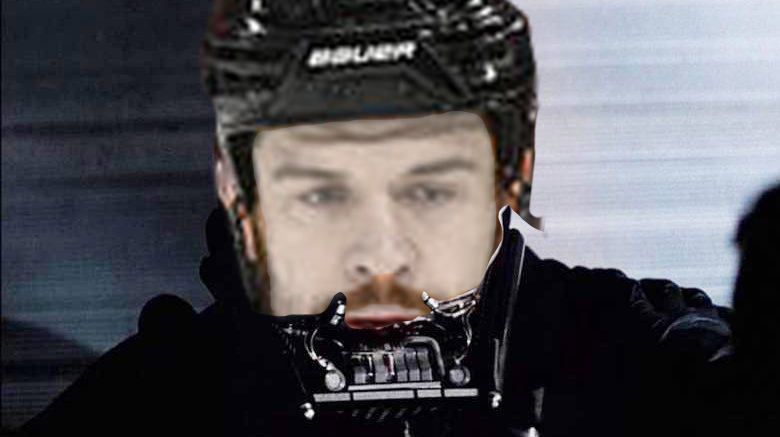 It was a brief snippet on social media, but yesterday the Hawks announced that Brent Seabrook had undergone the third of his three major surgeries–both hips and one of his shoulders–and that he was expected to be fully recovered in five to six months. Which would put him on course to be ready for training camp, and even give him some runway to train on his own in August to ramp up for it. Which is not a runway he’s really used before, but here we are.

This doesn’t mean the Hawks are clear of the headache.

While the whole saga still remains fishy to me, i have little doubts that Seabrook had these surgeries. I mean, I just don’t think the Hawks are capable of pulling the kind of sideshow conspiracy of announcing he’s out for the year with these problems and then stashing him off in Bermuda or Belize or whatever. And he’s been around the team at times, so we know that. Still, it’s awfully weird that Seabrook was carrying injuries this bad for this long, if you believe him and the Hawks and that’s why his play sucked, and they kept sending him out there. But we’ve had that talk.

If I were a betting man–and my recent ass-pounding at Santa Anita would suggest I’m either very much not or I very much shouldn’t be–I’d still say that somewhere between the convention and camp next summer the Hawks announce that during his rehab, Seabrook either suffered a setback or realized he can’t be the player he was or something to that effect and he’s hanging them up. And I would bet they turn the home opener into some kind of “One Last Shift”/retirement ceremony for him. That would just be my guess.

They could also be trying to prep the ground for some kind of trade if he really wants to play. “Hey, we’ve cleaned all this up now and he’s basically part bionic but he can still help a third pairing for the cool price of $3.4M per year!” The Hawks obviously would have to eat half his salary to move him along, or more to the point of having any prayer of doing so.

That could set up an ugly exchange though, where Seabrook is saying he’s healthy enough to play but the Hawks say he’s either not or he doesn’t fit into their plans and we know the front office wants to avoid that like the goddamn plague.

Still, it’s really hard to see how Seabs fits in next year. Let’s be optimistic (or “optimisty” as Sammy Sosa would say) and say Ian Mitchell signs after his college season. We know the Hawks defense would at least look like this:

That’s…fine? But it could be better. It lacks either a third puck mover, depending on if Mitchell is even going to be that (though he should) and whether you can even consider Keith that at 37. It would need more mobility, and Seabrook does not provide that. And this is assuming the Hawks have the foresight to buy out Olli Maatta for the mere $800K it would cost, and no one should be sure they have that kind of vision.

And if Mitchell doesn’t sign? Well now you’re probably two d-men short, and sure Seabrook can be on the third pairing but you’d better find a plus-puck-mover with wheels to pair with him down there and Seabrook’s salary makes it awfully hard to find room for say a Tyson Barrie or Torey Krug or Sami Vatanen.

And there’s the rub. With Seabrook on the team, the Hawks only have $10M in space for next year, with Kubalik, Strome, and two goalies needing to be put back on the roster. As discussed, a buyout of Maatta opens up $3M+, but that’s still not enough. And don’t forget that Caggiula is probably playing himself into a raise, too. And once again we’re assuming the Hawks are smart enough to let Erik Gustafsson walk, which sounds like a great way to end up stabbing ourselves.

It’s at this point that I have to say this would be a shitty way for Seabrook to have to end his career, especially if it’s in some sort of spat with the only organization he’s ever known. There is a way to thread this needle of course. Everyone can be clear with each other right after this season ends, with Seabrook saying he wants to play and the Hawks saying that’s great but they have to move on on their blue line. And then trying to do right by him by doing their best to find him a new home. It’s something of the same playbook they didn’t use last summer that we put forth.

How the Hawks end this season will probably play into it. If they miss the playoffs, which is still the more likely outcome given everything, it would be easy for players and management to point at the missing leadership and “oeuvre” of Seabrook as a cause. At least they could use it to justify not having to make the hard decision, which we know they love to do. But if they do make the playoffs without him, even with a departing Gustafsson, that becomes trickier.

It’ll make for excellent television, though.