Because Something Is Happening Here But You Don’t Know What It Is, Do You, Mr. Jones? 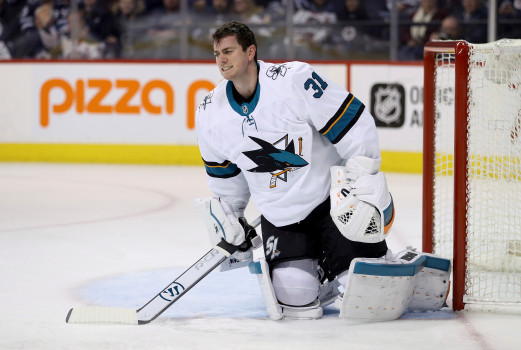 You miss most of their games because they’re on late. You might have seen on Twitter this morning that we got awfully close to a Joe Thornton cock-trick last night. He had a hat trick and there was an overtime to add to it, and hockey twitter waited with anticipation you could cut and serve as a side dish.

You’ll also notice they lost in overtime on a night they gave up just 20 shots. And this is the problem for the San Jose Sharks.

The Sharks are the best team in the Western Conference. By any measure, it’s not even all that close. Whatever metric you want, the Sharks are top-five in and most likely top-three. They limit attempts, shots, and chances while creating a fuckload of their own. They roll teams most mights. The Sharks recently had a stretch of six games where they were below water in possession. Shockingly, Erik Karlsson missed all of those games. They also won all of them.

But the one thing the Sharks can’t get is a save. They’re last in the league in even-strength save-percentage, and the only team below .900 in the category. Overall in every situation, they’re second-worst behind only Florida. Even just league-median goaltending of .902 overall would have seen the Sharks give up 20 less goals. That’s about six points in the standings or so, which would have them well clear of the Flames in the Pacific (though still 10 points behind the Lightning, who aren’t even playing the same sport right now).

And the Sharks have six days to decide what they’re going to do about it.

There are some parallels to last year’s champs. Martin Jones’s collapse, much like Braden Holtby’s last year during the regular season, came out of nowhere. Jones has been as solid as you could ask in San Jose, with a .915 over three seasons. At 29, he certainly wasn’t poised for a dive over the cliff due to age. And it’s not workload either, as Jones is seeing less shots per game this season than he was last year (28.3 vs. 27.8). And the types of chances Jones is seeing are just about the same, as the differences in scoring-chances per hour and high-danger ones that the Sharks are surrendering are negligible.

Now, I’ve already been on record that Jones will pull a Holtby, and follow up a subpar regular season with a playoff rescue act and everyone will quickly forget that he was so bad during the 82. Jones has been more than reliable in the playoffs with the Sharks, sporting a .926 across three forays, including a .923 during their run to the Final in 2016. If the Sharks want to count on that, there’s evidence. And the Sharks, given what they’ve been doing, really only need average goaltending to beat most anyone. Their first round is likely to see them beat up on any of the remedial class in the West (assuming they can beat the Flames out for the division). Even finishing second will see them find Vegas who have been woeful of late and Marc-Andre Fleury is doing the humpty-hump in net.

A second round dance with the Flames is unlikely to see the Sharks get goalie’d either, as Mike Smith will be Neymar’ing everywhere or David Rittich will be seeing all of this for the first time. Stranger things have happened of course, but you wouldn’t bet on it.

It’s beyond that where the problems lie. Connor Hellebuyck or Pekka Rinne are both capable of going Iron Curtain for a series, and in the Final you’re most likely trying to keep the Lightning’s Punisher collection of weapons at bay. Can’t do that with even average goaltending, you wouldn’t think.

But if you’re the Sharks, everything is on this year. Conference final isn’t good enough. Neither is just a Final appearance. You’re here to do the damn thing. This is Joe Thornton’s last year, most likely. Erik Karlsson doesn’t seem guaranteed beyond this spring. Everyone else who matters is over 30. This is the one. So what do you do, hotshot?

The answers on at the deadline aren’t plentiful. Jimmy Howard out of Detroit can be serviceable, and behind a much worse team. But his last attempt at the playoffs was three years ago and it saw him get clocked so heavily he was pulled as starter. He hasn’t had a decent playoff run since 2013 when he nearly helped pull the wool over the Hawks’ eyes, and only a Seabrook speculative off of Kronwall’s stick kept him from doing so. He’s far from guaranteed.

Maybe you see if Luongo has one more run left in him before he hits the beach for good? But he’s been ouchy and bad all season, and if one of those goes TWANG! again you’d be back to Jones anyway. Jonathan Quick is signed for a million more years. Craig Anderson is also old. There isn’t much else to find.

But that’s ok, the Sharks’ entire legacy is only riding on this…