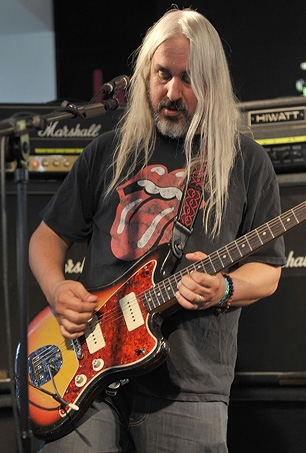 With tonight’s game being the first truly serious affair for the Hawks thus far in their series with the Wild, it seems only fitting that some serious riffery accompany it, which is why Dinosaur Jr.’s salt-and-pepper bearded J. Mascis gets the call.

Unassuming in appearance with his Cousin Itt locks draped over his face and sleepy in his vocals, Mascis for over 25 years now has contrasted that by unleashing an absolute screeching banshee through his guitar. As one of the preeminent proto-grunge acts of the late 80s (back then it was just called “college rock”), Dinosaur Jr. incorporated classic rock heft and Mascis’ soaring solos to otherwise minimalist song structure and subdued vocals. After a long layoff in the 90s and Aughts where bandmate Lou Barlow went on to form and lead Sebadoh and The Folk Implosion, Mascis himself trucked on with either a modified version of Dinosaur Jr and in solo form. But since reuniting for 2007’s Beyond, Mascis and Barlow have now put out three excellent records with power-pop caliber melody now added to their arsenal in their renaissance, most recently with last year’s I Bet On Sky. Because getting your face melted never goes out of style.