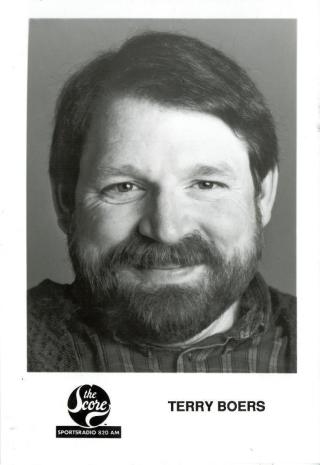 It’s rare that I get to step in and do one of these. It’s McClure’s and Killion’s domain. But I step into the breach today, and go with the rare beard (BY CRACKEE) of the day that one of us actually knows and has been a friend for somewhere around 20 years now.

As some of you know, I was a regular caller to the old Afternoon Show on The Score, back when they were 820am, from about the age of 12. That’s why when I email now it’s as “Once Young Sam” because back then it was just “Young Sam.”

And it was getting to know Terry at such a tender age that my mind became so warped. While I won’t share the details of it, having him tell you his O.J. Simpson-Farrah Faucet story on a bus to Milwaukee at the age of 14 changes a boy. Or when he came into the Scorehead fantasy football draft, swore at everyone for about 15 minutes, watches the Arlington Million with you, and then goes home.

There were other moments. Again, without going into detail, there were some dramatic happenings in my life when I was younger, and Terry always sent a note to let me know I was in his thoughts. And he still checks up on this blog occasionally, to see what his destruction of a young, promising mind has wrought. I appreciate it.

Terry remains the crotchetiest presence on Chicago radio, but I find it endlessly hilarious. His partnership with Dan Bernstein, though it angers large swaths of Chicago, is what a sports radio show should be. Silly, off the cuff, analytical, and stupid all at the same time. It’s pretty much what we do here.

They’ve always supported us at both of our blogs, and we’re forever appreciative. So on this Feel Good Friday, take it from T.B. Diddler: