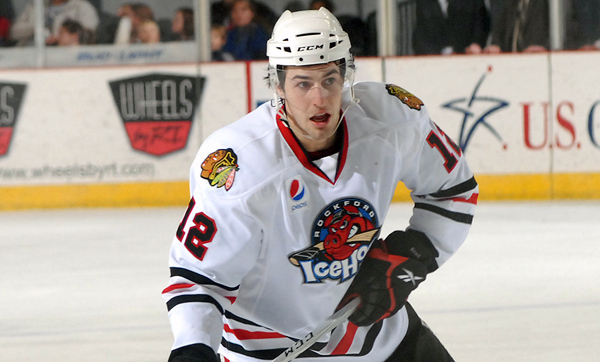 The first time I ever attended Prospects Camp was with McClure (I think we were both unemployed at the time and had nothing else to do) it was at the original Johnny’s and Beach was just about the biggest name there. McClure and I both remarked how the puck seemed to follow him around the ice and the skill was obvious as when he wanted to he always picked out a killer pass or opened himself up for a shot. The thing was, even in that atmosphere, he didn’t really want to all that much. He was much more concerned with taking swipes at guys as they passed with that dumbass grin on his face, or starting shit behind the play, or whatever other bullshit he could come up with. It was so easy to see what attracted scout and also what kept him on Stan Bowman’s “Do Not Open” list even from that brief viewing. Upon reading the reports from Rockford about him for the following years, it certainly sounded like that never changed.

Or maybe Beach never recovered from the major shoulder injury he suffered in 2011 when he apparently somewhat had his head on straight. But he got injured in a fight, so he probably didn’t. Tallon is hardly the only GM to burn a 1st rounder, though he’s in a stretch of 1st round picks that has Dylan Olsen and Kevin Hayes (ouch).

I find it kind of cute that Beach signed (though I recognize he was traded last year) in Europe the same day that the Cubs sent Brett Jackson packing, another prospect I really wanted to believe in who ended up being complete dogshit. Can’t win ’em all, right?

Other things floating around my head:

-Apparently Extra Skater has gone off the radar. The Twitters are agog with speculation on whether it’s been bought or he’s been hired by an NHL team or shut down by the NHL itself. I hope the NHL itself realizes the benefit of having something like this around and how it helps generate interest in their game. People gobbling up information, no matter where, about the league is good for the league. You don’t see MLB trying to shutdown FanGraphs. Let’s hope we get a good answer soon.

And yes, of course I’m biased because Extra Skater makes my job so much easier.

-We’ve been quiet about this whole “Summer of Stat-heads” thing, but it’s always a good feeling to be on the right side of history. While the dinosaurs will be hard to fully move to the side and certainly won’t go quietly, you only need to look at the other major sports to see how this will go. Baseball is ahead of everyone of course, but we heard all this bleating before. The NBA is about five years ahead of the NHL, but it’s heading that way too. It’s going to be more and more a part of hockey, and everyone is going to have their “stats guy,” if not a whole team. The Hawks may already have theirs, they certainly want you to think they do, and that’ll make it all the better and easier to laugh at those who cling to the old, outmoded ways.

-Tool’s Dany Carey will be playing drums for Primus this fall. You probably shouldn’t miss that. Seeing as how Tool probably won’t tour until 2021.

-I really wanted to like “Married” on FX. I really did. I’d do just about anything for Judy Greer. But I don’t. Doesn’t feel like anything new.

Anyway, have a good weekend. I’m on vacation then so the rest of the crew will take you through.