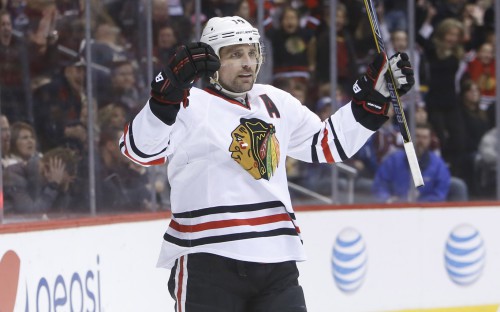 As we feared, the odd travel schedule left the Hawks somewhat off their game. It wasn’t the prettiest or cleanest game from either side. Luckily, that side is way worse than this one, and the Hawks didn’t need to pull out the glossy stuff to pretty easily see this out. God I love it when the Avs suck.

Let’s not waste any time…

-We’ve spent probably the past two years hammering on him (and in my mind deservedly so), but for the past couple months Brent Seabrook has been quite solid if not more so. Is he a bit of a cowboy in the offensive zone? Yeah, he can be, and it does lead him to get caught from time to time. But when you have a parachute like Keith behind you, you probably should be aggressive. His more important other work at the other end has been good too, though we all worry when he gets attacked with speed to the outside. That means his positioning has to be perfect, and for the most part it has been.

With Seabrook playing like this, and Keith as good as he’s ever been, Q is going to have a decision to make how to deploy all this. Because once again, his only players underwater in possession were Oduya and Hjalmarsson. While they’ve held the goals out for the most part, you wonder how long that can continue when they’re continually at the wrong end of the ice. Can Seabrook and Keith continue to keep the Hawks on the front foot if they’re assignments get much tougher? Would that free up Oduya a little more? Would it matter? Either way, Seabrook is going to blow by his career high in goals for a season which is 9 (already has 7) and he might make a run at 50+ points.

-If Keith can find that lane to slap-pass to Kane for that goal, why is he always hitting shin pads the other times?

-I feared the amount of abuse that was going to be hurled at Crawford after the first two goals, though MacKinnon’s shot was a laser and the second deflected. I’m tempted to give him a break, as he’s had one start in a month and barely any practice time as well with the Christmas break. But he recovered well. Most nights, if the Hawks goalies stop 23 of 25, the Hawks will win .

-The ice-time was weird. Rundblad and Erixon only got 17 minutes combined, and Erixon didn’t get any kill time and Rundblad barely 20 seconds. Nordstrom and Carcillo also didn’t play over 10 minutes. I fear the lessons of last year have still not been learned. If these guys are here they’re here to help and we need to find out if they can. Maybe Q has already made up his mind about all of them, but considering there’s no trade coming he’d better make the best of it now. And even in that little time, Rundblad once again kept the play at the other end even if his positioning for the goal against wasn’t good enough.

-I’m not surprised Patrick Roy turned Matt Duchene into a tool, that was always on the cards. But turning Landeskog into one was a real trick. Whatever, enjoy the sinking ship you fucking twats.

-Two power play goals in a game? That’s allowed? I guess it is when Erik Johnson is on the ice.  Anything can happen then.

-Patrick Kane spent the season’s first month or so without a center, and he’s now sixth in points and fifth in goals. Remember when people wanted him traded for Ryan Miller? I like to think about that when life gets a little low. Then I nearly tear a groin muscle laughing.

-It says Marian Hossa had four shots. Can’t say I remember any of them. Then again, I didn’t notice Jarome Iginla either. Symmetrical?

Got through that one. There are two much bigger ones this upcoming week. Keep it rolling.