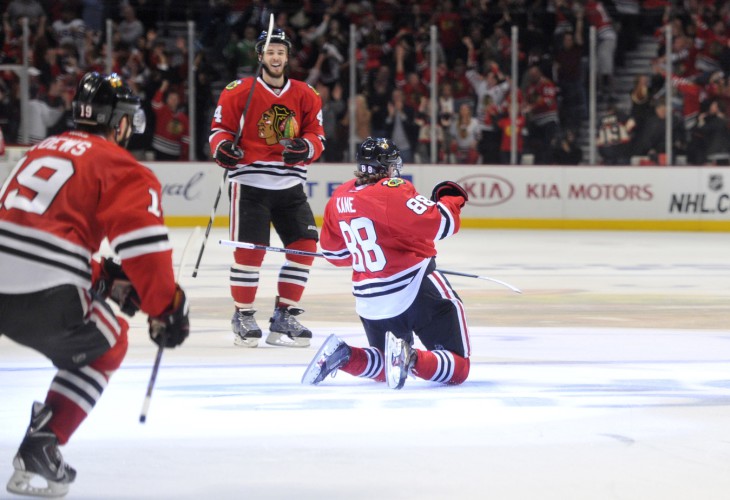 Or last night. Depends on your definition. Whatever.

There are many things to complain about tonight, but in the end it comes down to, “Survive and advance.” After the first 20 minutes, the Hawks were the second best team on the ice. They probably stole this one. But it doesn’t matter. You get where you can, and the Hawks did so. The historians won’t note that the Kings were the better team tonight. And that’s all that matters.

-Before I start on anything else, full credit to the Kings for showing the spirited defense of their crown that first-round exits of the B’s and Hawks could not in previous years. No one would have really batted an eye if after down two so early in the first if the Kings packed it up and waited for the charter home. They were beat up, on the road, and having it all to do. And they did it. It’s probably and unjust result for them to lose. But they were more desperate, first to most of the races for the puck, and certainly more systematically tight. The Hawks were lucky to get out of this one, but sometimes that happens.

-Geez, isn’t it nice that Anze Kopitar didn’t show up before this?

-Even more satisfying that a 2OT winner (the first time we’ve been through this since we stared this), is that Patrick Kane just shoved a middle finger up everyone’s ass. While he hasn’t been great for a lot of the playoffs, most of that stems from being first on the opponent’s checklist of what to take out. He’s had his chances, he just hasn’t buried them. He did tonight. That’s a second hat trick in a clincher. Go ahead and doubt him at your own peril. Boom motherfucker indeed, Kaner. Boom motherfucker indeed.

-All Jonathan Toews had to do at the end of the 3rd was win that draw, and he couldn’t do it. That has to change in the next series.

-Well, I don’t have to worry about when Dustin Brown might show up in this series. Because it didn’t happen.

-The Kings were the better team for the 1st OT and for parts of the 2nd, as well as all of the 2nd and 3rd periods. But you can only toss some of their d-men out there for so long before something happens. Kane’s goal in the 3rd (which should have been the winner), stemmed from Regehr not handling pressure from Toews and putting Williams in jail with a grenade of a pass. Bickell pounced, there you go.

-Dave Bolland seemed to have a lot of jump tonight. He’d better keep it going, the Hawks are going to need it come Wednesday.

-It’s tricky to pinpoint why the Hawks surrendered the last 40 minutes of regulation, but I’ll go with puck support. For most of this series, whenever one Hawk got jammed up by the Kings forecheck or pressure, a second one was there to free the puck and keep moving the Hawks forward. That seemed absent tonight. They got away with it. They better not think they will again.

-Oh look, Slava Voynov made a bad defensive decision. Who saw that coming?

That’s enough. It’s late and you know where I’ve been. The Hawks got through it, but they’d better find 5th gear for what’s next. Nothing less will do.