Does Anybody Really Know What Time It Is – Blackhawks 2, Red Wings 1 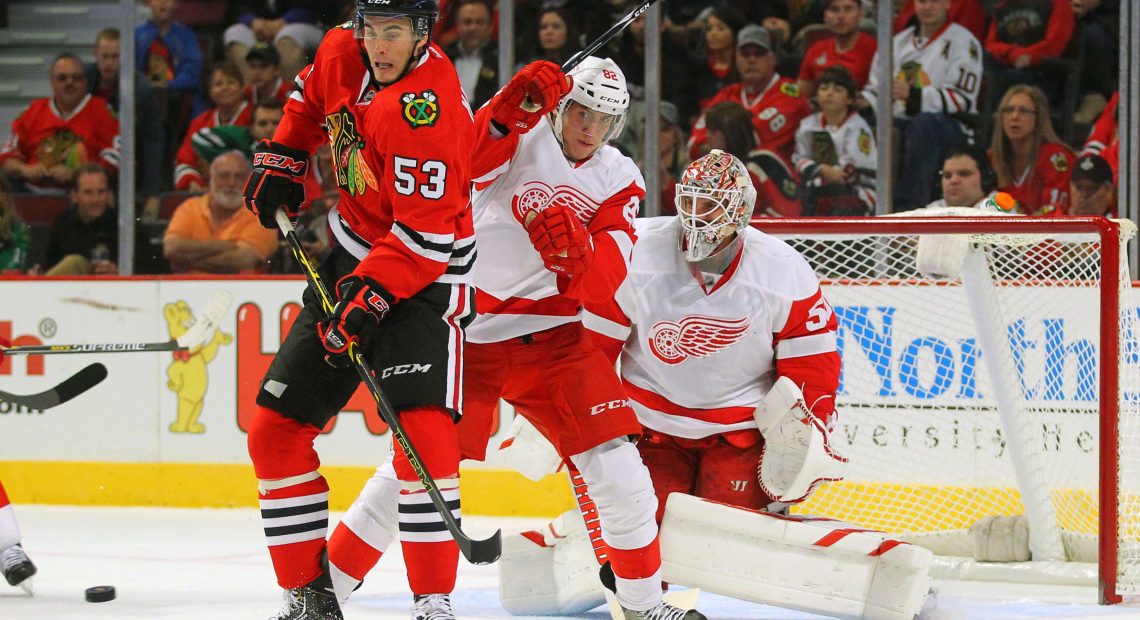 Here we are again.

Sort of. For all the excitement that a new hockey season promises, the first preseason game really strikes home the fact that meaningful hockey will not be played for a long time. The Hawks and Red Wings participated in what was mostly a glorified practice with television cameras and referees included.

–In the preseason, rosters change every game and unless you’re in the coaches meetings, it’s hard to get a read why certain rosters are chosen. For the opener, the Hawks went with their top 2 lines and top 3 defensemen. The rest of the roster was filled out with a lot of maybes and never was (or is it never was’s? You get my point).

Of the non-regulars, Klas Dahlbeck played the strongest game. Kyle Cumiskey proved why he is an elite skater and also made decisions that reminded you why he’s been playing in Europe the past couple seasons. Phillipe Danault already profiles as a potential bottom 6 center but it was hard to gather any other insights from his game because he was stuck between Cody Bass and Brandon Mashinter (more on that in a second).

Jeremy Morin was stuck on a line with Dr. Rasmussen and Matt Carey and predictably didn’t generate a whole helluva lot.

Anyways, that’s pretty much all I have to say about that.

–The Blackhawks are one of the deepest teams in the league. On many teams, guys like Adam Clendening, Klas Dahlbeck, Phillipe Danault and Jeremy Morin would already have gotten extended looks at the National Hockey League level. Yet here we are nearing the beginning of a new season and the Hawks are concerned with replacing the least valuable player from their roster last season.

For the most part, everything that Joel Quenneville says in that article I agree with. They’re not looking for a one-dimensional guy and they’re not looking for someone who participates in staged fights. Unfortunately, there is a long track record of Joel Quenneville not really practicing what he preaches and/or not being able to identify what those one-dimensional guys look like.

So it’s understandable why you would be queasy at the thought of Cody Bass or Brandon Mashinter taking up a roster spot while someone like Teuvo, Danault or whomever else with an ounce of ability and skill toils away in the minors.

This quote from Bass, though, is just too delicious not to mock.

“I think for someone on the fourth line, it’s simple hockey,” Bass said. “I think if you don’t get scored on, it’s a bonus.”

Because that’s how a player on a team with Cup aspirations should be approaching each shift.

–By the way, in one game alone, Foley dropped 5 “Shitters” alone while trying to say Mashinter. If he plays 82 games, the FCC may have no choice but to pull Blackhawks games off the air.

–I’ve seen a lot of criticism thrown towards Cam Barker for hitting Teuvo during training camp and essentially knocking him out of the last few days. Not sure I agree with that.

The one thing that needs to be reinforced is that if someone as slow and generally out of position as Cam Barker was able to crack Teuvo with a clean hit, it’s a certainty that someone else would have gotten him (probably even worse) once the regular season started. While he’s a special talent and has generally avoided big hits for the majority of his short pro career, Teuvo is still learning the positioning of the North American game.

So breaking out the tar and feather treatment for Barker is pretty unfair. Especially when you consider the fact that he saved us from many articles about how the Hawks didn’t have enough toughness to deter an opponent from knocking out their young prospect.

Time is a flat circle, after all.

–Stan Bowman was in the booth with Pat and Eddie for a solid 20 minutes. Not a whole bunch was said that would be deemed newsworthy during that stretch.

–In case you were watching this game with the sound off, the Hawks have yet to work on their special teams. That was a public service announcement shared during each Blackhawks power play.

–These preseason games can be very difficult to watch (Cuba Gooding strip shows included) and we’re all smart enough here to not draw any conclusions from them. Let’s all try to get through these next few weeks healthy for the regular season.