Another Reason This Final Sucks 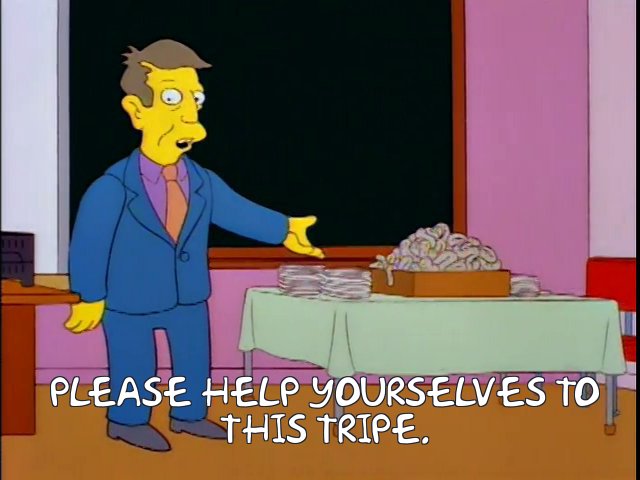 I mean, take your pick. The hockey hasn’t been terribly enjoyable, there’s yet to be a good game, both fanbases would do the world a favor by leaping into Sarlacc, no matter who wins we’re all going to be sick, and add to that the narratives or stories around these teams are so stupid and wrong. The feeling of relief when this is over will be akin to  the stiff shit that takes five minutes to get out. A metaphor more apt than we should take too much time to consider.

With Zdeno Chara unlikely to make the bell tonight (and I’m still convinced it doesn’t matter much other than numbers), you can be sure Blues fans are going to be pumping that their HEAVY style is the reason the Blues are where they are and very well may pull this off. It’s been what they’ve been pushing for…oh, 25 years now? 30? Their entire existence? I’m not sure, but the Blues have always had to define themselves by how much they make their stained-jersey wearing fans snort and belch and cheer itchy trigger-fingered cops. Never mind this team is actually built on its speed and newfound finish and creativity, because that doesn’t fit into how St. Louis has to portray itself and the hockey media is all too happy to go along with because it’s either too lazy or too drunk to do much else.

And to be fair, it’s the same for the Bruins, who got here thanks to sublime goaltending and having the best line in hockey, along with a very mobile defense that the Leafs, or Jackets, or Canes simply couldn’t catch enough or force into mistakes because they always find space.

So let’s review, because it’s going to come up during the broadcast the next two or three nights. Here is the list of “victims” for the Blues and their supposed torturous style:

Erik Karlsson – carried a groin injury since February that caused him to miss 26 games that got worse, wouldn’t you know, by playing every other day in the most intense form of the game for a month straight.

Matt Grzelcyk – Illegal hit from behind

Zdeno Chara – puck to the face

So yeah, the Blues GRITHEARTSANDPAPERFAAAAART had exactly zero to do with any of this, unless we’re counting illegal and dirty hits as an actual tactic now. Which they very well may be in St. Louis. I suppose the real fear is with Tom Wilson getting a ring last year, teams are just going to sanction whatever nutters they have on their team to make a couple runs at someone per series, and they’ll deal with the consequences as long as the other team’s defenseman misses time. After all, you have more forwards than they have d-men. And before you shrug that off as an impossibility, remember this is hockey and anything can happen, and the dumber it is the more likely it is to.

Physicality is part of playoff hockey, no one denies this. Sorry, let me get that right, NO ONE DENIES THIS! But seeing as how everyone is trying to be physical and shrink time to make plays and cause turnovers and mistakes and get the puck back deep in the offensive zone with everyone out of position, it’s not really a “strategy.” The defining part is how you cash in when you get those turnovers, or how you set your team up to avoid them. The forecheck and physical play is a given. It’s like saying in football that having five offensive lineman who will definitely try to block people is a strategy (unless this is the Cutler-era Bears, who definitely didn’t have that nor try to do that).

The attrition of playoff hockey has always struck me awkwardly (then again, what doesn’t? I’m gawkier than the ace of spades!). I know the length and “Wreck Of The Hesperus” nature of it makes it a true test, and what a lot of people love. Which is fine. Still, if the playoffs are all that matter, and we’re using this to decide who the best teams are (which it doesn’t always but whatever not the point), it would be a truer test if these teams were closer to full-strength. Depth is certainly part of the hockey equation, no doubt. But I don’t know that having these things settled by third liners and eighth defensemen is the best showcase of the sport. And we have 82 games to test depth as well, including when top players simply go through slumps.

There is no answer of course other than shortening the season (I can’t stress my 76-game schedule when Seattle arrives enough, knowing it will never, ever happen), which is a nonstarter. So we’ll just have to live with this, as wrong and misguided as it may be.