Angels Spotlight: The Chosen One 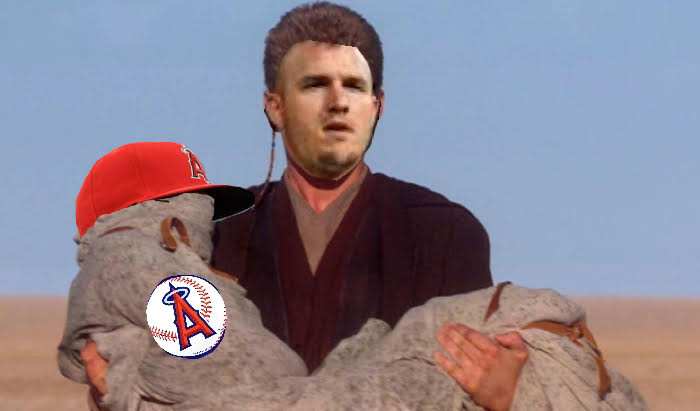 Players like Mike Trout come along once in a generation, if that. Someone with the combination of raw speed, athleticism and power just do not grow on trees, even these days with next level physical workouts and sciences available to athletes. Trout has throughout his 8.5 year career amassed 72.7 WAR, which is an insane stat in and of itself when you consider the next closest player in that time frame is Buster Posey from the Giants, and he’s worth a mere 49 WAR. Mike Trout is 23.7 wins against replacement better than the next best person on that list. He’s also added a Rookie of the Year award, made the All Star Game 9 times and won the AL MVP twice.

Wanna know whats almost as amazing as those stats? Since he was a rookie in 2011, the Angels have made the postseason ONE TIME. For an organization with potentially the best player in the history of the sport (an argument for another time, but yes he is) on their roster, their only postseason appearance was in 2014 where they got swept by the fucking Royals. The same Royals team where their best player in terms of WAR is Alex Gordon, with a whopping 27.1 WAR in the same time frame as Trout. Suddenly I don’t feel so bad for Jose Abreu during this rebuild.

What all this goes to show is that baseball is truly a team sport, and even the best player in the sport can’t do it all by himself. So where have the Angels gone wrong? Well for starters, their pitching staff  is (and has been) utterly woeful. In the same span of time that Trout has been on the team, the Angels are 4th from the bottom in combined pitching stats. Only the Orioles, Padres and Reds have been worse during that time. Their best pitcher (and I’ll use WAR as the defining stat just to keep consistent) in that time has been Jared Weaver with 13.0 total WAR in 6 years with the team. In comparison, the Sox (who happen to be 15th on that list, dead in the middle) have Chris Sale and Jose Quintana both with far better WAR totals (27 and 21.5 respectively) in that time frame.

They also haven’t really put together a team around him that can keep opposing pitchers from pitching avoiding him. This has improved recently with the signing of Shohei Ohtani from the Japanese league, and the maturation of younger stars like Andrelton Simmons and David Fletcher. They also have Jo Adell waiting in the wings, who projects to be the next Ronald Acuna (and who went just before the Sox took Jake “I’ll Run When I’m Dead” Burger) (fuck). So the future offensively is fairly bright for the Angels, but they’re already regretting the money they spent on Justin Upton, who has been a pretty massive disappointment thus far.

This past off-season the Angels addressed their most pressing need by signing Trout to a 12 year $430 million dollar extension, essentially making the best player in a generation an Angel for life. Now I would guess they will have to spend on pitching this upcoming winter, or risk letting that player never go farther than the first round of a playoff series. You’d have to think Garret Cole and Zack Wheeler would be high up on their lists to join Ohtani, Griff Canning and Andrew Heaney as the pitching staff that just might give Mike Trout the one accolade that isn’t already on his mantle: World Series MVP. Honestly as a baseball fan I’d be rooting for them to succeed, as seeing Trout hoist the WS Trophy would be one of the cooler things for the sport.