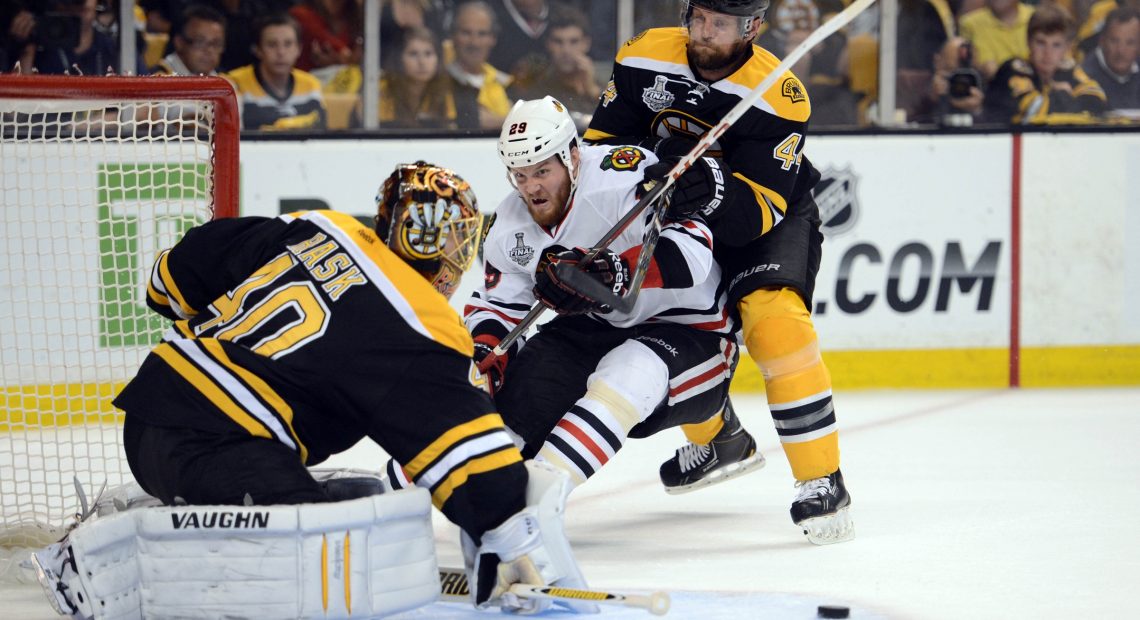 It had to come down to this eventually, but it’s time to take a look at how the lines figure to shake out given the roster turnover. At least for how they’ll probably look for the first 10 minutes of Banner Night against Washington, before Quenneville gets impatient and plays Handzus 18 minutes.

The inimitable Laaarmer wants to know:

Saad, Pirri, Shaw, Kruger, Toews. Who’s gonna play where and with whom?
(you all know this is the question you want answered)

No reason to switch things up too drastically after the way this line performed in the latter stages of the playoffs last year, even in spite of Bickell’s litany of injuries. Now that he’s gotten his raise, getting top-6 power forward coin, he’ll be expected to perform at that level far more consistently. As for Daydream Nation, even though Patrick Kane showed an ability to be dominant dragging Dave Bolland’s dead ass around, doesn’t make it a consistently good idea. In the words of Chris Rock, “Just because you can do it don’t mean it’s to be done”.

It’s a lot to wade through, but looking at Kane’s With-Or-Without-You Stats on Hockey Analysis show a pretty clear advantage to playing him with Toews, most succinctly and hilariously illustrated with this graphic. Assuming Kane didn’t get about 52 minutes of sleep the entire offseason the way he did in the summer of 2010 and remains hell-bent to stuff it up everyone’s ass again this year, the Hawks should still have the top-end production they’re going to need. Oh, and that Toews guy is on this line too.

This is where things always get hollow in the Hawks lineup, even if they’ve got a guy on the left wing on this very line who could do the job. In any event, pining for Patrick Sharp to return to the middle is a fool’s errand, as we’ve found out going on now 4 seasons.  So the void will look to be filled, hopefully, with a bit of youth, again, until Q absolutely needs to have Michal Handzus there. That youth figures to come in the form of either the AHL’s leading scorer Brandon Pirri, or the giant-faced Hobey Baker winner Drew “Bob Loblaw’s Law Blog” Leblanc.

Both are relatively unknown quantities, but have shown playmaking abilities in their respective stops prior to the big show. With two wings like Sharp and Hossa, the primary main objective is to get the puck to either of the two of them and get out of the way and act as a facilitator, even as both now stare down the bleak oblivion of their mid-30s. The biggest question will be if Quenneville will remain patient enough and not get points-chasey in November and December to allow either to grow into the role. And on a team like the Hawks with clearly defined roles for their various lines, including a top line that demands attention, the second line usually is a soft little hammock against slightly lesser competition with fewer defensive responsibilities, which would be mitigated by having two exceptional two-way wingers on the line as well.

With Dave Bolland, and more importantly, the myth of Dave Bolland now in Toronto, it’s now Marcus Kruger’s turn to step up and endure the torturous minutes against the conference’s top competition. Kruger has shown flashes of being able to shoulder such responsibilities, particularly on the penalty kill, but it’s now time for Kruger to make the role his own. In the past, we’d viewed him as a classic tweener, neither big nor nasty enough to be a true shutdown center, despite having a throbbing positional hockey mind. Given that a Barry-Bonds like transformation this off season isn’t likely, it’s time to up his unpleasantness factor, and also maybe think about winning a draw everyone once in a while.

He’ll have some help in the former category with Andrew Shaw, moving back to his natural position of wing, where he has less responsibility and therefore makes some of his antics more tolerable. Brandon Saad is a one-man breakout who figures to finally start growing into his man-child frame, and could possibly swap spots with Bickell throughout the season based on the opponent or who has the hotter hand. Saad was trusted with killing penalties by about the middle of the shortened campaign last year, and that defensive wherewithal should aid him nicely when on the third line.

This is of course a platonic ideal for the fourth line, as it can’t really be said for certain who will earn these bottom six spots among some of the Piggies fighting for an opportunity in the show, and of course with Brandon Bollig’s dumb ass spectre looming over the proceedings and threatening to take away minutes from kids who can actually play. Not to mention that Handzus is Q’s blankie, and could get tossed into a far more demanding role despite a mountain of evidence of Zus’ inability to handle it for any amount of time.

But if played correctly, Zus’ veteran wiles and (theoretical) ability to win a draw combined with two young go-hards who forecheck like madmen and in Morin’s case, has a finisher’s hands to slay some bottom 6 bums, this line could be effective enough to not only give the men at the top of the roster a lighter workload, but also make a difference on the scoreboard as well.