All The Boys In The Band Know How To Get Down – 2019 Sox Player Reviews: Yoan Moncada 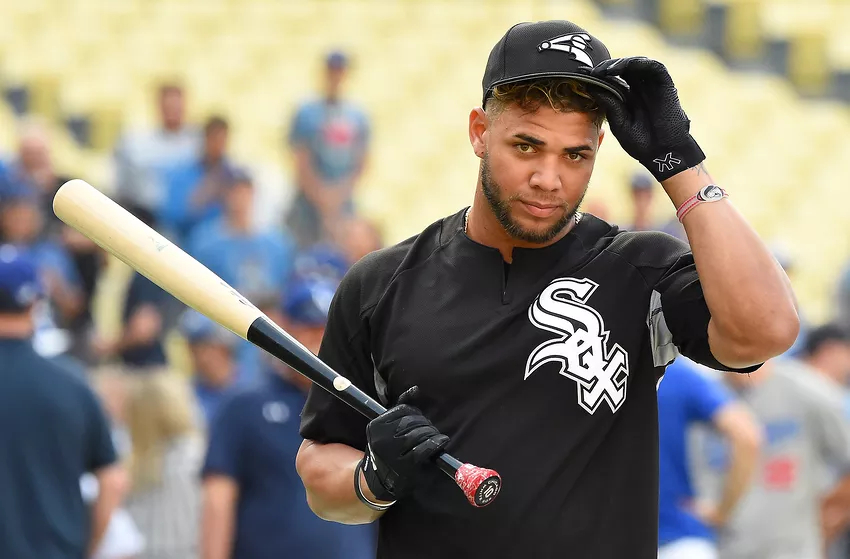 Now we come to another key member of The Future™ who had himself a breakout year, Yoan Moncada. Not only did he bust out at the plate (ending up the 4th best hitter in the AL behind Timmy, DJ LeMahieu and Michael Brantley) but also in the field, transitioning pretty seamlessly from the cornerstone position to the hot corner. Let’s dig in, shall we?

Tell Me A Story: Questions, questions, questions. Coming into the 2019 season, all Moncada had around him were questions.  In 2018 he slashed .235/.315/.714 and lead the AL in strikeouts which lead to question after question about whether or not Moncada should abandon switch hitting, about his aggressiveness at the plate and whether or not he took too many called 3rd strikes, all the way to his preparation level for his defensive play. There were even a few members of Sox Twitter (depression level: Joker) who had doubts about his hustle level during the season.

Moncada apparently heard all of these questions himself, as in the off-season he headed to Arizona to work with hitting coach Todd Steverson for the Long Dark of winter. During those months, he spent a considerable amount of time on his swing mechanics and working on being more aggressive at the plate. In addition to that, in the middle of his off-season workouts he found out from Ricks Hahn and Renteria that the Sox were going to move him back to 3rd base, which was his original position when he was drafted out of Cuba by the Red Sox. That’s a lot to deal with for someone who was admittedly struggling under the pressure of being ranked the best prospect in baseball and being the cornerstone of a trade involving a potential hall of fame pitcher.

The work he put in during the winter was immediately shown off during Cactus League play in March where he posted a 1.110 OPS and clocked a few dingers. Most importantly he looked far more comfortable hitting from the right side of the plate, where quite a few times he looked lost in 2018. The hot spring training carried right over to the regular season where he hit .301 in April and knocked out 6 of his eventual 25 home runs.

His effectiveness from both sides of the plate was worth noting, as he was able to up his average hitting right handed from .209 in 2018 all the way to .299 this year. The strikeouts dropped precipitously as well, going from a league high 217 last year down to a far more respectable 153 this season. His walk rate dropped, but that’s something you would expect from a player actively working on being more aggressive at the plate. Really the only thing missing in Yoan’s offensive game is power from the right side of the plate, which you can see below in his slugging heat charts. 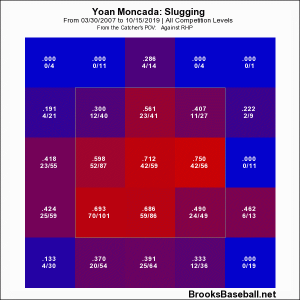 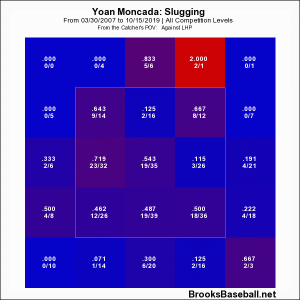 Defensively, Moncada improved as well moving from 2B to 3rd pretty easily. His DRS score may not show it with an ugly -6 but looking at his Ultimate Zone Rating for his play at 3rd base and it’s positive for the first time ever in his career. Fangraphs also had him as the 4th best overall 3B in the whole league, based on qualifying time. So while DRS is a solid stat, sometimes it does not tell the entire story defensively for a player. His errors also dropped from 29 last season down to 15 for this year. Not too shabby for one off-season of hard work, which should hopefully put to rest the talk of his lack of preparation and hustle.

Moncada did miss some time at the beginning of August with a hamstring strain, and a few games after getting drilled on the knee with a Chris Sale slider the same game where the Sox lost Tim Anderson to the shitty field conditions at Fenway. Overall however, he was able to stay on the field pretty consistently which is what you would hope for your hot corner.

Contract: Under team control through 2020 making $550,000, Arbitration begins in 2021, free agency in 2024. I would expect the Sox to try and buy him out of those arbitration years in a deal similar (but more expensive) to what Tim Anderson and Eloy Jimenez got.

Welcome Back Or Boot In The Ass: Once again, just like Timmy there’s no question that Moncada comes back as perhaps the most important member of The Future™ club. Questions going into next season are all predicated on what Rick Hahn has planned for free agency. While I don’t expect Moncada to be moved in the field again as he’s settled in nicely at 3rd, I wouldn’t completely rule it out should the team make a surprise run at Anthony Rendon should he not re-sign in DC. Other than that, it’s a question of where he hits in the lineup and who is on base for him to drive in. Sky is the limit for Yoan here on out, and it’s gonna be awesome to watch him become the superstar he was advertised to be back when the Sale trade was made. The Red Sox may have won the battle, but I think the White Sox win the war.