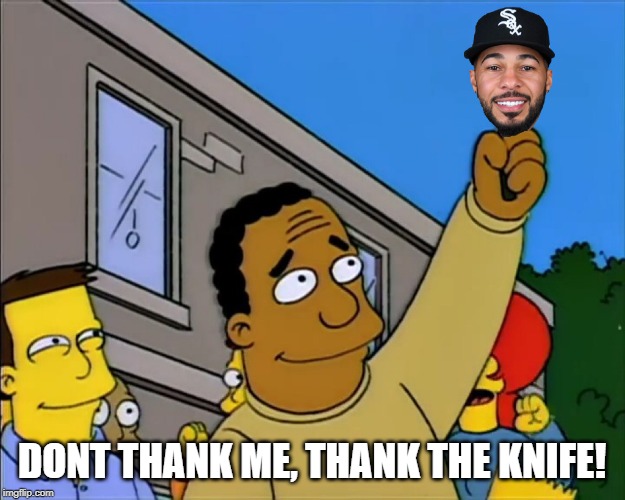 Every team needs a Swiss Army Knife, the kind of player you can throw in any position at any point in the game and can hopefully expect league average production. Leury Garcia has been that knife for the White Sox for the past few seasons, let’s see how this one went.

Tell Me A Story: If consistency is one of the most valuable traits for a baseball player in the major leagues, then Leury García is a human ATM machine. For the past three seasons with the White Sox, García has hit above .270, stolen at least 10 bases, and played defense at multiple positions (2B,3B, SS, LF, CF, RF) with at least replacement-level production. He’s also been worth 2.6 WAR for the past three years combined, which for an everyday player (which he wasn’t supposed to be) is just OK but for a super utility man is way more than acceptable.

Coming into the 2019 season García was expected to play around 100 games, spelling Anderson, Moncada and Yolmer during the week and then playing occasional OF as needed. It was a solid plan, and would have worked out perfectly. Unfortunately, it turned out that Jon Jay’s skeletal system was made of balsa wood and paper mache, and the center field position had collapsed on itself like a dying star, where no offensive light or slugging percentage was able to escape its ineptitude. Before the season had even started, the plan had already been shot to shit.

Previously the most games García had played in a season was the 87 he logged in 2017. With all the crap mentioned above combined with the fact that Anderson and Moncada both still needed days off AND they ended up missing time with lower body issues meant a whopping 58 game increase for him. Predictably, this resulted in a drop off of his production the last month of the season. Even then he was still league average, which is a pretty solid baseline for your utility guy.

Offensively (as shown by his stats above) García is not an OBP machine. His 3.4% walk rate pretty much confirms that. So if he’s on base, he’s gonna have to hit his way on. That’s not the type of profile you’d want for your leadoff hitter, but low and behold that’s where Renteria had him for a good portion of the season. This isn’t a knock on Renteria (though his lineup construction was sometimes on the level of performance art), as he was just playing the hand he was dealt. The Sox didn’t have a true leadoff hitter on their team, and García was quick on the base paths so he sort of fell into the roll. Ideally, you’d have Leury hitting in the 9-hole, rolling the batting order around with speed to the #1 guy, providing multiple RBI opportunities to your #2 and #3 hole hitters. Perhaps this is what we will see next season, providing he’s not flipped at the winter meetings in a few months or priced out of the White Sox “budget.”

Contract: García is eligible for arbitration this year, and should expect a modest raise from the $1.55 million he made in 2019. I would think his camp would ask for $3 million and the Sox will settle for about $2.6. He’s a free agent in 2021.

Welcome Back Or Boot In The Ass: A lot will depend on how arbitration goes. If the number comes back in the upper $3 million range, the Sox may decide to cut bait and see what production they can get out of Danny Mendick or Ryan Goins spelling Tim and Yoan in the infield. With the team primed to fill some holes through free agency this winter, the need for García to play in the outfield should be much less, and I would expect Adam Engel to be there to fill in any needs as the team’s 4th outfielder.

The possibility for him to be at 2B full time exists if Nick Madrigal isn’t deemed ready for the big time and the Sox say goodbye to Yolmer Sanchez (which looks increasingly likely). In this instance, $3.5 million for a league average second baseman is a pretty good deal. Especially if you can move him back to the super utility role once Madrigal makes his debut later in the season.

Bottom line is as long as his price doesn’t get to exorbitant, or Rick Hahn somehow gets an offer he can’t refuse during the winter meetings I would expect Leury García to be back with the White Sox for the 2020 season.