All Lost In The Free Agency Market: Defensemen

Gonna jump around here a bit, as we’ll get to wingers either later today or on the holiday. But the other pretty obvious gap for the Hawks other than center is a #6-7 defenseman, or at least someone to make sure Sheldon Brookbank has a platoon partner. This could easily be solved by simply re-signing Michal Rozsival, but that comes with a couple risks. One, he may have priced himself right out of it with a superb playoff performance. Two, counting on year-to-year consistency from your bottom pairing d-men usually ends up biting you in the ass. Remember how Brent Sopel went from hero in 2008 to hated in 2009 to loved again in 2010? Essentially, your third pairing is your middle relief, and by its very nature can swing wildly from useful to a giant sucking sound one season to the next. We present Shawn Camp as Exhibit A, your honor.

So if Rozsival doesn’t return, where might the Hawks turn?

Let’s get a couple pipe dreams out of the way. Scuds fits the bill as a stay-at-home angry badger that can play center field for Nick Leddy, as he’s done for Letang and Martin and Doughty in the past. The Kings have a little cap concern and may not want to pay what he can get. However, what he can get is beyond what the Hawks probably have allotted. Especially when the rumors are that the Penguins want to bring him back. So while he might not get the $3.4 million he did in L.A. last year, he’ll probably land around $3 and the Hawks won’t have much more than $1.5 to $2 to give.

See above. Would probably be even better than Scuderi as he’s slightly more mobile and slightly more unpleasant to play against. But the B’s and Ference have already parted ways, which probably means both expect him to get a raise from his $2.4 million last year and for more years. The Hawks probably won’t offer more than one or two at a stretch for this role, as somewhere down the road they’ll want to give Dylan Olsen and/or Stephen Johns (if he’s still with the organization, that is) a chance.

Another pipe dream, only because he’s put up some lofty numbers in a system in Anaheim kind of built for him to do so. But he is 35, so there’s a thread of hope. Probably can do better anyway.

I know I know I know. Couldn’t even crack the Leafs lineup. Just bought out. But this guy is only two years removed from being pretty effective while being crushed under the light of his contract and market. His stock really couldn’t be lower now, he’s only 31, and in a reduced role with a lot of cover he might not be the worst idea in the world. On his game, he’s the physical presence the Hawks like to have in their #6 role.

We know the Hawks have asked about him via trade in the past, and he’s kind of the dunderhead that Quenneville always seems to fall in love with. But we already have one Sheldon Brookbank, and this would pretty much be adding another.

Well, he’ll be cheap. This is a player both McClure and I have been intrigued by for a few years. He could never live up to the expectations when he was coming through the Dallas system, he’s just not that explosive of a player. And he was a scratch for the dumpster fire on the blue line that was Edmonton this past year, which isn’t encouraging. However, he’s still only 27 and if asked to do a lot of not much here, under Quenneville who has shown an ability to get the most out of d-men when there’s something more to be mined, he could be something of a platoon partner for Brookbank. It’s a leap, but not an unfathomable one. 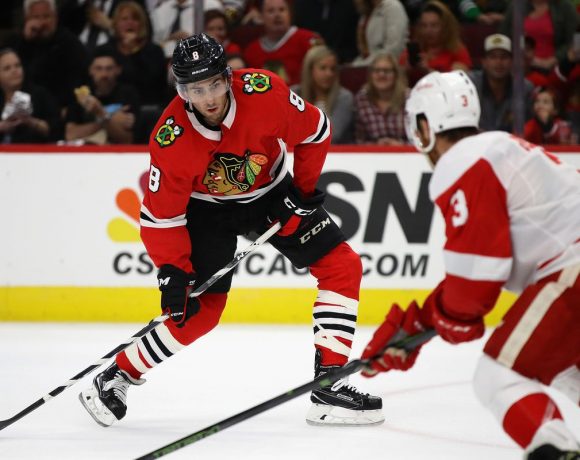