THOUGHT THEY WERE JAMES DEAN FOR A DAY: Hockey Wilderness

WHERE WE’LL BE, AND YOU SHOULD BE: Sheffield’s in Lakeview

A lot of people have asked or wondered aloud whether Game 1 was Minnesota’s best punch and if they’re now out of answers. I’ve always thought that we’ll see Minnehaha’s best punch today. This is the first playoff game at Excel Energy Center since well before this blog existed, and you know that crowd is going to baying for blood from the word go (assuming they can get out from the snow).

With that in mind, the more conservative approach we’ve seen from the Wild in this series, at least to start games, is probably not going to be in evidence in the opening frame this time. Expect the Wild to come out flying, getting the puck behind the Hawks defense and then trying to sacrifice those same d-men to Mayan gods against the end boards. It’s almost certainly going to be frantic and pressured. Cal Clutterbuck might spontaneously combust.

With that said, if the Hawks can weather it — and there’s no reason they shouldn’t be able to — there’s going to be tons more space behind that initial wave than they’ve seen before. It’s going to take moving the puck out from behind the red line quickly and to actual tape instead of space and hope, but if they can do that they might not see four Wildlings in the neutral zone or three of them lined up at the blue line like a foosball table.

With the venue switching, Mike Yeo is going to get to pick his matchups a little better. That might not matter all that much, but you can be sure he’s going to get Koivu and Parise away from Toews, and Suter and Brodin out against Toews as much as he can. If the top line is ever going to make noise for Minnesota, it’s today. I doubt Q is going to care all that much, as he wasn’t concerned about matchups at home. So why would he be on the road?

No lineup changes that I’ve seen. Niklas Backstrom is still a no go, as are Bolland and Emery for the Hawks — though both apparently made the trip, and could go for Game 4.

Today is all about how the Hawks handle the right hook coming through Louisiana that the Wild are going to throw when the gate opens, if I can mix two sports/Richard Pryor metaphors (and I can, it’s my fucking blog). The experience advantage they have was kind of built for what they are about to face. They’re going to have red and green flying at them at a pretty high pace all 1st period. We have seen the Hawks decide they don’t want any part of this kind of stuff in the past, but no one would expect that today. If they come out of the first tied or better — even down just one goal wouldn’t be the end of the world — they should be fine when things calm down and the frantic, boisterous pace slows down a bit. It also could take the wind out of the Wild, as they may be left wondering what they have to do.

As people say, there’s no game in the playoffs that’s less must-win than any other really, but I guess this as less of a must-win as the Hawks will see. But still, when you’ve got a team rocking on the ropes (more boxing?) there’s no reason to let them out without going down. Rip their hearts out today, and they’ll probably be fodder to be driven to the cliffs on Tuesday. 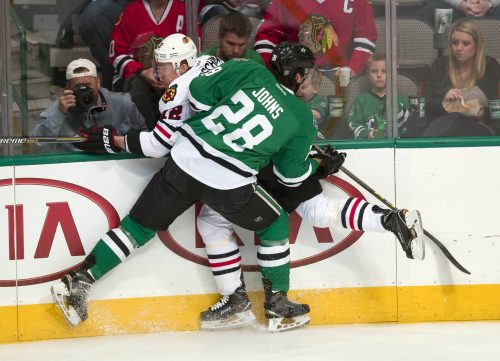 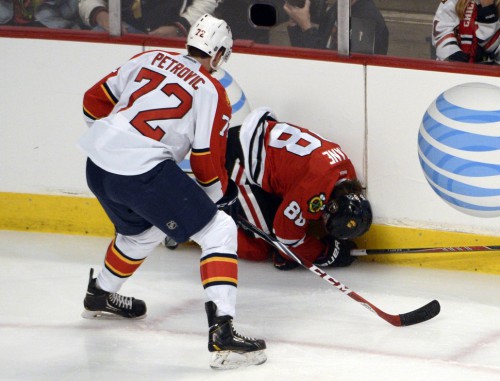