With Wednesday night’s late two-goal rally to claim Game 1 in Tampa, the Hawks have already on paper accomplished what they needed to prior to the series turning north. But now is not the time of year to cede absolutely anything to the opponent, as the Lightning found out in emphatic fashion 3 nights ago.

While the Lightning pushed the pace in the first period backed by a fired up home crowd and attempted 19 shots in the first 20 minutes to just the Hawks’ 9, they only attempted 16 total in the final 40 minutes while allowing the Hawks 36. After the dust settled, that was good for only a 43.75% share of the proceedings, which Jon Cooper seemingly didn’t have a problem with. In the press afterward he stated that he liked the way that his squad played, and it was a matter of a “seeing eye single” that equalized things, yet somehow neglected to acknowledge the degree of improbability for the ‘Ning’s lone tally from Alex Killorn. And to a certain extent he’s correct, they did play well in the first and he should have been pleased, and he should be reassuring his young squad that they certainly can not only keep up but dictate play as well. Either way, look for his team to floor it from puck drop tonight.

In doing so, the hope will be that the Triplets line of Palat, Johnson, and Kucherov will manage a little more offensively. They were on the ice for both goals against, and between the three of them put only one shot on goal, and attempted only 3 shots as a collective. That’s simply not going to cut it with the Hawks being able to throw out 12 forwards who can all drive play. But Jon Cooper didn’t really match his lines to any discernable degree in Game 1, simply rolling his 3-ish lines and even giving the Triplets the heaviest distribution of offensive zone starts. The top line of Stamkos, Filppula, and Killorn far and away drove possession to the greatest degree for the Lightning, and came away with the team’s lone goal despite starting more often than not in their own zone. Filppula specifically has not ceased to be annoyingly effective since his days in the Winged Wheel, and Cooper moves he and Stamkos back and forth from the wing and pivot from shift to shift.

As expected, Victor Hedman and Anton Stralman received the heaviest workload on Wednesday, both playing approximately 26 minutes a piece, and were both above water in possession while doing so. In particular, both of them played about half of those 26 minutes against the Toews line, and hemmed them in phenomenally, with Hedman specifically out attempting Toews 12 to 5 in 13 head to head minutes. However, behind the top pairing, not a single Tampa defenseman was on the positive side of the ledger, and Braydon Coburn in particularly got dong whipped for a D-corps-worst -11 primarily against the fourth line.

In net Ben Bishop was mostly solid, and holding the Hawks to two goals and giving the league’s #1 offense only 2 goals to have to overcome in theory should have been a solid enough effort. His 2 goals against on 23 shots was actually slightly above the .888 save percentage he had been posting at home coming into game one. Either way he’s been inconsistent at home, and he’ll likely need to surpass his Game 1 performance if the Lightning are going to earn a split. One thing he has excelled at is handling the puck outside of his crease, which blunted many opportunities for the Hawks to get in on a forecheck.

As for our Men of Four Feathers, while the results were positive, there is still room for improvement. Assuming that the Lightning don’t hang back as they did in the final 40 minutes of game one, the there are some positional things to keep in mind. First, when the Lightning were pressing, they were using a high hoist of the puck to center ice, to either catch a defenseman flat footed or fumbling with the puck. This can be combated by a little bit more conservative play from the defenseman, but that could end up being at the expense of being able to jump in the play. Secondly, the Lightning predictably and consistently broke in to the Hawks zone in the middle of the ice hoping to draw three to four defenders and slide the play to the outside onto the tape of a speeding winger. For the most part, the Hawk forwards stayed with their respective checks while back pressuring and not gravitating towards the puck carrier. They’ll need to maintain that level of discipline to keep Tampa at bay (GET IT).

It appears that Kris Versteeg will remain in the lineup with the line configurations unchanged from Game 1. Verbeauty was actually solid on Wednesday night, and tenacious in his puck pursuit during regroups by the Tampa defensemen. If the lineups remain the same and Jon Cooper still eschews line matching, it looks like Jonathan Toews will get a healthy amount of Cedric Pauquette again, who now seems to believe he’s the second coming of Bob Gainey after one game. And I’m sure Toews would be more than happy to give him a larger sample size to work with than just one game after those comments.

While the ice time for the defensemen was predictably top heavy, it certainly makes sense on the road, and that trend figures to continue tonight. Duncan Keith played a game high 29:15, which seems wholly reasonable given the circumstances, and was a defensemen-best +6 in possession. Both Kyle Cumiskey and David Rundblad were above water as well, so they seem to be getting their legs underneath them in the situation, though having Cooper call off the hounds for forty minutes helps.

As was pointed out yesterday, Corey Crawford has been very solid since his return to the lineup in game 6 in the first round against Nashville, with only Killorn’s circus deflection getting past him in game one. This included a couple of point blank saves against Steven Stamkos, arguably the best pure goal scorer the Hawks have faced in the Renaissence Era. Because the Lightning lack the bulk up front of say the Ducks, there aren’t a lot of bodies for him to have to fight through to get the puck, and the Hawks’ defensive mantra has long been to let Crawford see the shot and trust his positioning. If they can limit lateral movement within the zone, it should give Crawford more than a fighting chance to keep this pace up.

Tonight’s game figures to be the full-on track meet that the entirety of Game 1 was expected to be. The Lightning appear to have learned their lesson regarding playing safely, and there’s far greater incentive to press the issue tonight. Going back to Chicago down 2 games is a less than ideal position, and their thought process could very well be that if they come out with their asses afire once again and get greater than a 1-0 lead, the Hawks will pack it in having already gotten their road win. But the Hawks have a full four lines that can go the full 200 feet up and down with the Bolts, and suddenly the sprint becomes an endurance race.

The chances will no doubt be available tonight. Captialize on them and bury them. Let’s go Hawks. 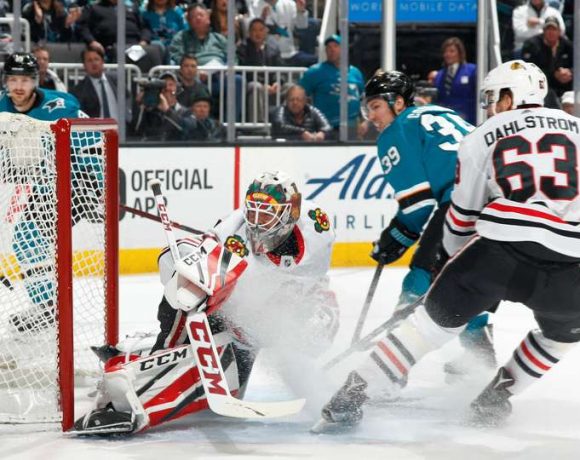