Your Friends And Neighbors – ’17-’18 NHL Team Previews: Our Special Boy… And Whoever Else 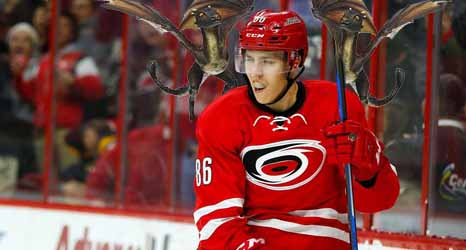 Fitting after doing Toronto yesterday (and boy are our hips and hamstrings sore!), we move to the Metro Division and start with a team that might be Toronto minus one or two years, and somewhat doing it in reverse. The Carolina Hurricanes certainly have the blue line of a true contender. Now they’ve added at worst a representative goalie. The question is do they have the hosses up front to make some noise in the East’s tougher division? And is Teuvo Teravainen the best Hurricane right now? Or the best one ever?

Goalies: The Canes could have made a run at a playoff spot last year. Here’s the thing about being a hockey fan. Even the guys behind the bench and in the GM’s chair that you think are pretty bright, they all have blind spots. I think Ron Francis is a pretty good GM. Probably one of the better ones in the league. Yet his devotion to Cam Ward ran at least two years too long. Yes, the acquisition of Eddie Lack was an unmitigated disaster, but this team could have been playoff ready last year with any kind of goaltending and everyone but Francis knew that Ward wasn’t going to provide it. Thankfully for Canes fans, that fascination has ended.

Francis struck before the draft, taking meatball darling and ginger-beard champion Scott Darling from whence he came to be installed as the starter. And it’s hard to look at Darling’s numbers here in Chicago and not predict something just below stardom. His .932 SV% at evens last year is pretty striking. In the end though, we’re still talking about just 75 games over three years in the NHL, and Hawks fans know something about when more skilled teams get him moving. Which is something of an issue when you’re in a division with the Penguins and Caps. Even the Islanders have some firepower up front, though pretty much nothing else. But still, the smart money says that Darling is more likely to be Martin Jones or Cam Talbot, backups who moved to new teams to become the starter, than he is Lack. Ward as a backup should work out ok, as he’s capable of just spurts of competence (insert sexual joke here). Considering the underlying numbers, even league average goaltending should see the Canes fire up the standings.

Defense: Clearly the strength of the team. Anytime you can make noise about trading Noah Hanafin and know that you’ll be ok without him, you’re in a good position. Again, this seemed to be a Francis blindspot as he then traded for TVR, and he’ll learn quick, but don’t be shocked if any of their other defensive prospects consign him to the pressbox in a damn hurry.

You could even make an argument that Justin Faulk-Hanafin isn’t their top pairing. They’re probably the two best they have, but Brett Pesce and Jacob Slavin took the harder assignments in terms of zone starts and competition, which is probably why they’ve kicked the tires on moving Hanafin along. And they both came up with the best possession numbers on the blue line for Carolina. That top four… it’s hard to think of a team that can match it. A third pairing of the Chicago Rejects (playing Riot Fest this weekend) of Dahlbeck-TVR might not be something you’d pair with eating, but the Canes have the top four to mitigate it as much as anyone. With Pesce and Faulk on the top two pairs the Canes can push from the back for 45 minutes a night if they so choose. And TVR at least is someone who thinks he can do the same for the other 15.

Forwards: Ah, here lies the problem. While I also think Bill Peters is a really good coach, he also has a blind spot. It’s the same one we saw here, and it’s bouncing TiVo Targaryn between wing and center. Teuvo’s hands and vision seem to convince teams he’s Baby/Homeless Kane, when really what he is is Baby/Homeless Datsyuk. And given that the Canes are still short down the middle and should be whispering sweet nothings into the ear of John Tavares’s agent right now, along with sending weekly BBQ, that’s probably where Teuvo should be. Jordan Staal was sneaky dominant last year possession-wise, but the 45 points he put up are the absolute ceiling of what he’s going to give you. He’s a checking center, and maybe the best one in the league, but you can’t pivot an offense around him. Victor Rask might bloom in his fourth year, but he has the look of a #2 center at most as well.  Which makes for an awkward landing when another checking center, one Marcus Kruger, is also here. There were times last year when Teuvo and Sebastien Aho were unplayable together, and the Canes should look to replicate that as much as possible.

While the Canes lineup lacks star-power, it does have depth in that there isn’t a huge drop-off to the 4th line. Right now it’s slated to be Kruger between Joakim Nordstrom and Josh Jooris (a blog favorite for years), which is at least quick. Jeff Skinner and Lee Stempniak could be on the third line. Justin Williams shores some things up wherever he ends up skating. It’s a lot of role guys who don’t hurt you but don’t necessarily have to be gameplanned for either.

Outlook: With solid goaltending and the possession-heavy ways of Peters being deployed with that top-four defense and at least competent forwards, the Canes are a lot of people’s pick to be the sleeper team. And this division isn’t as hard as it first looks. The Jackets have every chance of backing up in a serious way. The Rangers are confusing as all hell and King Henrik is getting up there. The Islanders and Flyers could be really, really bad. We know the Devils will be. Much like the Leafs, the Canes feel like they’re one move away from making some serious noise. Even as currently constructed, this team should be in the race for the third spot in the division and wild card mess, unless Darling has a complete meltdown in net.