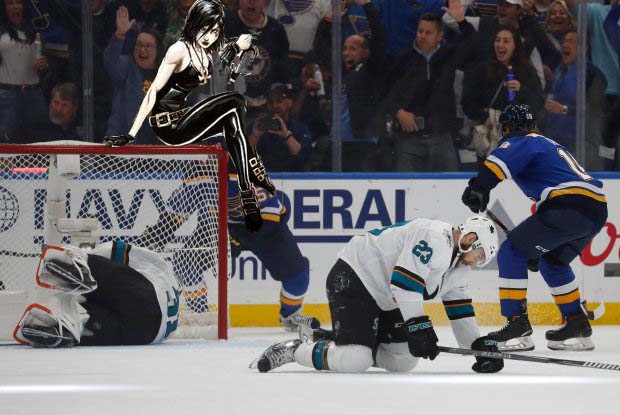 You had one job to do.

Let it be known forth that the San Jose Sharks are the only Bay Area organization that can only wield its location and power to fuck itself. Whereas everyone else stationed there slowly (or not) takes over the world and is influencing their various spheres and others, the only sphere the Sharks can influence is the inside of their thigh with a warm, yellow, and constant stream. And now it’s well and truly over for them. This generation of this team, one that promised so much, is done. Charred. Finished. Fertig. Verfallen. Verlumpt. Verblunget. Verkackt. Whatever hope they might have had for beyond went out the window with Joe Pavelski’s sense of direction.

This is probably their most spectacular crash yet. They got the best defenseman on the planet for nothing. A song. They added him to a team that already had three scoring lines, one of the best d-men around (Vlasic, not Burns). And it seemed that despite their best efforts, it would work. They had a goalie doing the lindy hop in net all season. Didn’t really matter. Their coach was insistent on continually lighting a fuse of playing Brenden Dillon more than Joakim Ryan. The Sharks kept putting it out. Joe Thornton could barely move. Fine. Hertl moves to center and no one cares. Perhaps they picked the lock.

They had miracles on their side. They trashed everyone’s favorite overhyped darling in the first round. They benefitted from Gabriel LaxativeLog’s lazy ass in the second. They had perhaps the only team that’s a bigger collection of failures and stomach-acid-pukes than them waiting. They got more bounces. They had an entire city on the verge of meltdown (to be fair, that’s St. Louis’s natural state, thanks to the dangerous levels of methane that surrounds the place emitted from every resident every four minutes).

And now it’s all ash. Peter DeBoer proved that any idiot can get a team to a Final, even twice. Hell, he just got beat by one. How did icing Michael Haley in the playoffs instead of…oh I don’t know, any kindergartner with two legs work out? Speaking of which, Dillon spent most of the playoffs looking like said kindergartner sprinting for the Sesame Street phone at playtime, and yet he played more than Ryan. Hey, did getting Karlsson back for those five games in February feel worth it? You were given the best toy in the whole league and you broke it. Fine work all around there.

This was a team that had a whole division basically fall in front of it, and still let Calgary’s line and a half plus a d-man waltz by it for the title. It was the first to contain two Norris winners in a decade, and then Brent Burns spent a month proving why his Norris should be melted down and poured over his head, if only to rid us of his hideous beard. If Burns came from Omsk instead of Canada Don Cherry would have beaten him with a 2×4 by now and they would have made that the Canadian flag.

Much like the Raiders, the Sharks probably need to be thrown out of the Bay Area now. Everyone else gets it. The Warriors are the best team in their league’s history. The Giants, inexplicably, created a dynasty out of hilljacks and sex fiends. Though the A’s trophy cabinet may be empty, they still stand for all that is progressive and cool about their sport despite drawing only parole board hearings to their games and playing in a literal sewer. The Raiders didn’t do shit, and have been sent off to where rejects go…off the strip in Vegas. Sadly, that’s not an option for the Sharks. Maybe Reno would work better.

They’ve left us with this curse of a Final. Just like they left us with Vancouver and Boston once upon a time. The Sharks have launched a bunch of plagues upon the hockey world through their incompetence. The Hawks dynasty started by running them over. The Canucks in ’11. We could have been rid of the Ducks sooner if the Sharks didn’t blow a #1 seed by trying to out-belch them. The narrative that Sidney Crosby would never get it done again was solved by a week with the Sharks. A Kings affirmation could have easily been snuffed out at the first possible hurdle. The Sharks turned it down four times.

The Sharks are everything bad about Silicon Valley, leaving the rest of society to clean up their mess without any of the benefits. They are the bubble-burst without the bubble. Somehow, they still leave the sticky residue all around without ever having put anything together. And “Sharks” is one syllable, you illiterate fucks.

Heretofore, the Sharks will be symbolized by both Patrick Marleau and Joe Thornton, their two greatest ever players who will never win a Cup, even when they flee trying to do so. You know what your problem is, Toronto? You’ve got San Jose running through you. They will soon be joined by Joe Pavelski, who definitely should have been playing and will definitely be able to identify his family in five years, and Logan Couture. Maybe Brent Burns, assuming he’s not facing the wrong way the rest of his life, which he most certainly will be.

It’s best if you just break it all up now. The happiest you will be is everyone forgets you for a few years while Hertl and Meier thrash about trying to constitute a first line. Thornton retires, Pavelski and Karlsson walk, maybe try and cash in on Vlasic and save him from the fate that awaits him. It’s not in you, Sharks. That much is clear. Like everyone else out there, you thought you had big ideas and could change things. But all you did was annoy the piss out of people and give way to something much worse. Oblivion is your only salvation.

Thanks for nothing, fucksticks. Now we have to deal with this.