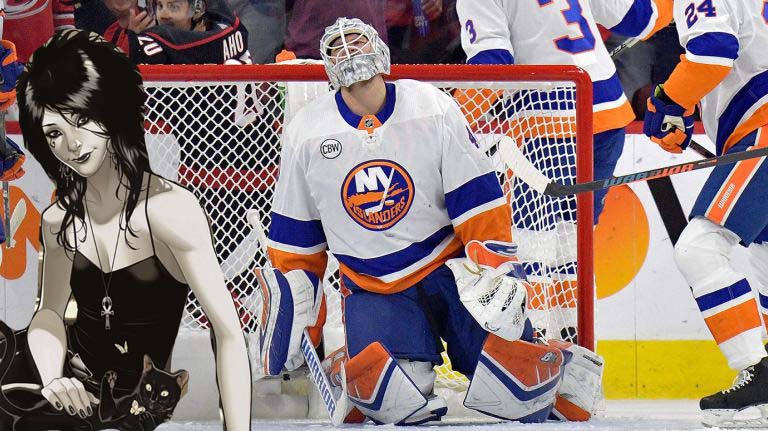 It’s not easy to wipe away the buzz and impact of sweeping a long-time tormentor with just the flick of a wrist, but then nothing has been normal about the Islanders since…well, ever. You’re supposed to carry the momentum of a franchise-turning win like the first-round sweep of the Penguins into something that will define this era and be remembered for a while. Scoring five goals in the next four games, including getting two and a half games against the perpetually bewildered Curtis McElhinney reduces that first round to odd trivia shared in various Long Island and New York bars where Tammy from Queens will offer to blow you in the bathroom but won’t remove her bubblegum to do so.

The Islanders sold their soul already, assuming they had one. You can’t blame them, really. This is a franchise that has managed consecutive playoff appearances just once in the past 15 years. So you see why they turned to Barry Trotz, the Jose Mourinho of hockey (though about 1/130th of the asshole). You’ll get results, your defense will improve, but good god it will be about as entertaining as checking your dog for fleas. And if you give him a historic collection of offensive talent, he just might get your team to grunt and belch to a Cup (though it’s important to note no other Trotz team has ever made a conference final, which seems his destiny in wherever the Isles call home). There’s definitely a floor you acquire with Trotz, you’re just going to end up on it if you watch them for more then two weeks straight.

You’ll hear a lot over the coming weeks about how the Isles future is so bright after this. Yes, clearly a GM who has acquired Matt Martin twice and Leo Komarov  for a second team, who has openly admitted he hates playing players anything, and is managing a team with literally no home is sure to steer this club into the sunshine. Nothing hockey players love quite like shaving every day and having to throw a dart to remember where the home game is today! Certainly worked out well for the last big free agent the Islanders had, all the way back to last summer. Can’t help but notice Brock Nelson and Anders Lee haven’t re-upped yet. Perhaps they and their agents are going over the Lamiorello, “Every player is overpaid,” comment and wondering just how much they enjoy life between the highways of Long Island and commuting an hour to an arena where the structure and the fans are constantly off-center.

And the Islanders need them, and then probably another two top six forwards. See how they do that when they’ve never been a free agent destination before. Thomas Vanek once went here to die, I think. Andrew Ladd did die, and he’s only got four years left on his deal. If you sign in Brooklyn in the summer you’re going to end up smelling like Brooklyn in the summer…sweat and mistakes. No, the Isles acquire players when they essentially become Australia and other teams send their unwanted contracts there just to get them off the books. And then they stay, because much like a prison a lot of Islanders realize they don’t belong anywhere else.

Still, this is the Metro Division and you can stay around the top merely by floating for a while. The Penguins are exhausted, the Flyers, Rangers, and Devils are too busy trying to give themselves enemas orally. So maybe your future can remain bright by doing literally nothing and watching everyone else fuck up. That must be what Isles fans are getting at. Assuming both their goalies don’t quit the team to go build the wall on the Texas border themselves, or bring guns into the dressing room (which is hilarious, because would the NHL actually punish anyone for doing that?).

But hey, the Islanders have now won a round in consecutive playoff appearances, which they haven’t done since 1985. And yes, those playoff appearances are three years apart, but when you’re an Isles fan or player you have to grab onto whatever you can. That, and perhaps the most boisterous atmosphere in the league, for the 10 games the Isles play on Long Island that is. Just another lesson in how Brooklyn pretty much ruins everything. Tell us about your parking lot tailgates again though, which you have to have because there’s literally nothing else in Nassau. Is Nassau even a place? I don’t know and I don’t care and no one else does either. It only is inhabited because Robert Moses built a kingdom on getting white people to flee black people. And the only team that belongs in Brooklyn plays in Chavez Ravine.

So farewell to the Islanders, who will spend the next few years wondering if an arena can be built next to Belmont Race Track, which will hinge basically on how to get at train to go backwards efficiently. No really, it will. You have to take a moment to realize the wonder of a sports organization longing to get to a nowhere place like Elmont, NY. Every other team wants to get downtown, the Islanders want to get to a freeway exit. That pretty much tells you everything you need to know.