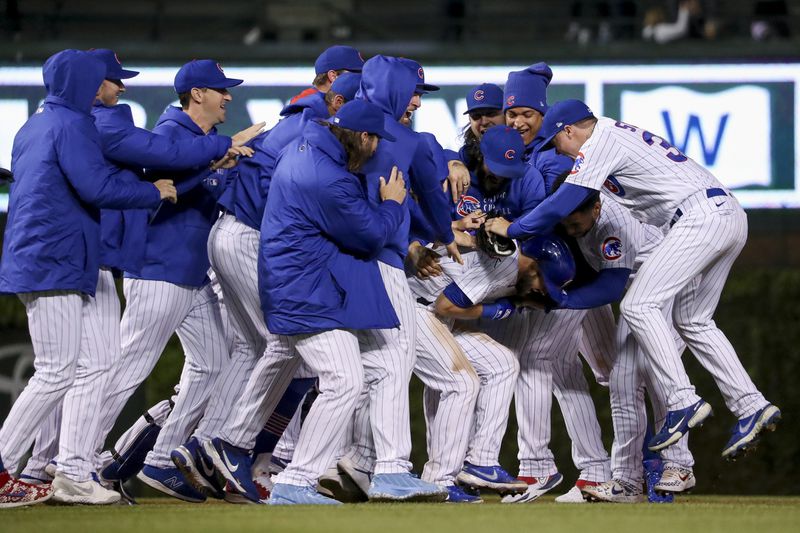 The Cubs went into this series with a handful of injured players: Nico Hoerner was put on the IL and Ian Happ is also day-to-day after their ugly on-field collision from last series. Additionally, Jake Arrieta has a right thumb abrasion and cannot pitch. Neither can Dan Winkler, who’s been a pretty good reliever all season, only giving up 2 hits in his last 5 appearances. The Cubs decided to bring up Kyle Ryan With Two First Names and Keegan Thompson, who we saw last series, in the meantime for pitching. Additionally, we got to see the first of Ildemaro Vargas in the infield this series as he replaces Hoerner…it’s happening.

However, the Dodgers came and played worse than we did in these games, allowing the Cubs to win the series. It was mostly because of a horrendous bullpen and some cringey fielding errors on the Dodgers’ part, but this series was a jolt of electricity that this struggling Cubs team needed to hopefully not be as trash in the future.

After last night’s game got rained out, Cubs fans got overloaded with baseball thanks to the first double-header of the season. Despite the daunting opponent and a Javier Baez fielding error to start the game, the Cubs jumped in front in the 1st inning, up 4-0. Clayton Kershaw got absolutely rocked by the Cubs, allowing a double, a single, a walk, a single, a double and a walk in the 1st inning, throwing a career-high 39 pitches and immediately getting yanked for the 2nd inning. And since Clayton Kershaw is an Incredibly Annoying Individual, giving him his worst and shortest start of his career is pretty hilarious.

The Cubs were then able to get two more runs in the 3rd inning. First, Jake Marisnick got hit in the wrist and got a walk, and right after that Ildemaro Vargas singled to bring Marisnick to third base. After Vargas stole 2nd, a wild pitch by Dennis Santana and a horrendous overthrow error by the Dodgers allowed both runners to score. Marisnick reappeared in the 6th inning also and ended up hitting a solo home run to make the game 7-0.

Today was certainly not Javy Baez’s best day defensively. In fact, it’s possible this was one of his worst ever statistically, as he has never had a three-error game in his career. Usually he’s the one making the big flashy plays, but today he was making the stupid errors. A particularly egregious error happened in the 7th; after dropping the ball in the infield and recording an error, he decided to toss the ball over to a Cub that just simply wasn’t there, letting the Dodger on base steal third. Good job, Javy. Sometimes you just have to laugh at it all.

Meanwhile, Kyle Hendricks pitched a complete game for once, and the Cubs’ starting rotation was finally able to make it to and record an out in the 7th inning this season. Although he allowed seven hits, the defense behind Hendricks was able to stay competent enough to only allow one Dodgers run, a solo homer. Hendricks also recorded only one walk and six strikeouts on the day.

The Cubs returned to the field a mere three hours later and trotted out Keegan Thompson to the mound for his first-ever major league start against Trevor Bauer, another Incredibly Annoying Individual. (The Dodgers have a lot of those.) Thompson and the defense behind him did a pretty good job of limiting the Dodgers, allowing only two hits and two walks in 3.2 innings for his first start. Rex Brothers, Ryan Tepera and Andrew Chafin combined to allow one hit total and 4 strikeouts.

This game was horrific, however, when it came to runners in scoring position. In 7 innings, the Cubs left fifteen people on base. Jason Heyward’s 3rd-inning homer was the only run the Cubs scored in regulation. Rizzo hits a lead-off triple and nobody can score him? It was honestly a disaster.

Any other team would’ve gained insurance runs on the disaster that is currently the Dodgers and their ugly bullpen, but the Cubs were unable to do it, forcing Craig Kimbrel into a huge save situation. When he allowed a homer to be plunked by Max Muncy, on any other team that wouldn’t have been enough to send the game to extras, but that’s exactly where it went for the Cubbies.

Dillon Maples, who is good by Cubs bullpen standards, threw a wild pitch to score the 2nd baserunner, and then Justin Turner homered to make it 3-1. I almost thought it was over until Javy Baez hit an absolute bomb to tie the game up, through just a great at-bat. In the 9th inning, David Bote hit a second walk-off that he can add to his highlight reel collection of two walk-offs, because his single sent our second baserunner home to end the game.

This game was a pitchers’ duel for the first half, going four innings before a pitcher gave up a run. Adbert Alzolay started this game as the Cubs try to see if they can get him to stretch and cover some more innings. His career-high innings played in a single game is 6.0, so there’s that. He got to the 5th inning before he really started to show wear, and he was immediately yanked to start the 6th (probably a good idea). After giving up a solo homer in the 4th, Alzolay gave up a single and a double to make the score 2-0 Dodgers. Overall, however, Alzolay’s numbers are acceptable for him. He had 6 strikeouts, 1 walk and allowed 1 homer, par for the course for him this season.

Luckily, Jake Marisnick did it again, tying the game and scoring Matt Duffy on a home run. The spotlight has been on Kris Bryant offensively so far this season, but Marisnick deserves some recognition of his own. He has 4 runs in 5 games so far in the month of May and has struck out just twice. He is second on the team behind Kris Bryant with a .987 OPS. When Marisnick’s up to bat, I get excited. And he’s “only” supposed to be a utility player. This is the absolute state of Cubs baseball this season.

The Cubs still left a handful of runners in scoring position, but not nearly as many as yesterday. The Dodgers’ bullpen, still more problematic than our own bullpen, gave up a walk and an RBI for Baez to tie up the game. Kimbrel looked a lot better in today’s 9th inning than last night’s, and because of it the Cubs got to the bottom of the 9th tied. Unable to walk it off, this matchup once again went to extra innings.

Baez had a highlight-reel day, RBI-ing in the tying run of the game and making a huge play at the plate in the 10th inning to limit the damage the Dodgers did from two runs to only one. Rizzo came in to pinch hit, a passed ball put Sogard and Rizzo on second and third, and a cringey Joc Pederson celebration was proved to be too early as he hit a fly ball that just missed home run territory. However, it meant the Cubs got to tie the game. Again.

The Dodgers used Big Brain Logic to intentionally walk Bryant and Baez to load the bases, and a double play showed their big brains paid off. Then there was the double play gone wrong thanks to Rizzo not stepping on the bag and allowing the Dodgers to score another run. However, it was Rizzo that hit the single at the bottom of the 11th inning that gave the Cubs the sweep after some useless dawdling by Dodgers pitcher Alex Vesia to make this game’s runtime a ridiculous four and a half hours.

Next up the Cubs play a series against the Pirates this weekend, who have lost 5 of their last 7 games and have since this series fallen to last place in the NL Central, having one less win than the Cubs and just as many losses. These two teams have split the six games they’ve played so far this season, although the Pirates have won the last two. And nowadays in the batting stats the two teams are just about even with each other, Pittsburgh just .001 point better than the Cubs with a .226 batting average. It’s gonna be loads of fun. See you Sunday.