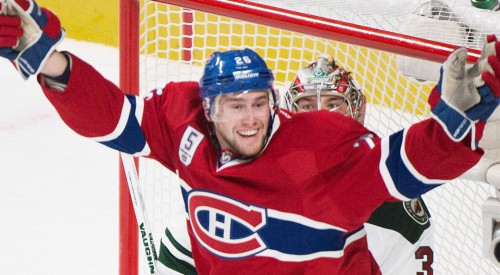 Interesting move this morning, as the Hawks traded CatButt to Anaheim for Jiri Sekac.

There isn’t much to tell about Sekac. I know that Habs fans last season were not pleased that the Canadiens gave up on him so quickly and he looked to be another sacrificed at Michel Therrien’s altar of “GRITSANDPAPERFAAAAART.” But Sekac never quite fit in with the Ducks either, and you sort of start to wonder how many more chances he has left.

He’s got good wheels and decent skill, so he would seem a perfect fit with the Hawks. But then he would have with the Ducks too, though maybe they couldn’t look beyond his size which isn’t much at a mere 6-0 and 185. Sekac put up seven goals and 16 points in 50 games in Montreal last year, and a further seven points in 19 games with the Ducks. He’s certainly capable of providing secondary scoring. He was carrying a 54% share so far this season, +2.9% of the Ducks’ team rate.

While everyone was falling over themselves about CatButt in October, anyone who had watched him play before this year (so basically only a few fans and no Hawks media) knew water would seek its own level. For the most part he’d lost his bowling ball game over the past couple months, though there was something of a revival the past couple games with Dr. Rasmussen and Panik At The Disco. But he is what he is.

This certainly provides the Hawks with more flexibility on the roster and on the cap. While Sekac makes 25 grand more he isn’t signed for next year, so the Hawks get younger and get a free look to see if he can fit longer term. He also could conceivably play on the top six, though I doubt he’ll start there, which would allow them to slot Shaw down. Or he gives the bottom six a more dynamic player, and actually would be a very interesting look on the opposite side of Danault from Teuvo. The Hawks get a month of games to see how it fits before the deadline for sure.

It raises a couple questions, none that truly matter. One, Patrick Sharp must’ve had the plague last summer because he was traded for two guys the Hawks had no use for and neither made 50 games with them. Second, they obviously don’t see Marko Dano helping at any point this season, if ever.

Anyway, good to see that even a 12-game win streak hasn’t stopped Stan Bowman from trying to push things. It’s generally the best time to do it, when you’re least desperate.