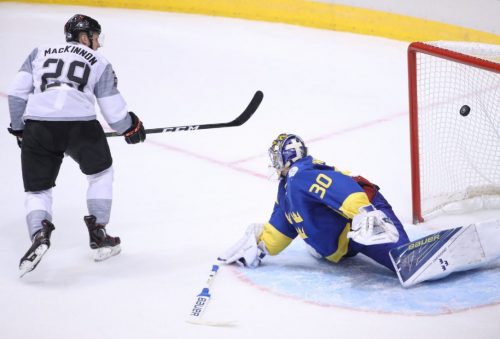 It’s hard to get a gauge one how this tournament is going over. We know Twitter can be something of an echo chamber (ha, “can”). So if you thought this thing was stupid  you definitely can find enough people who agree with you to get the impression that everyone thinks it’s stupid. If you like it, because hey, it’s hockey in September and these are still the best players in the world out there you can find enough voices too.

I’ve enjoyed having hockey back this early, enjoyed laughing at Team USA, and while The Young Ones have been endlessly entertaining I can’t escape the feeling of it being misplaced and manufactured. I feel the same way about the Young Ones that I do about 3-on-3 OT. It’s a gimmick, an entertaining gimmick, and the gimmick-nature of it kind of robs it of its meaning and misses the point of the competition.

So of course the two would merge yesterday afternoon, and anyone watching it couldn’t take their eyes off of it, no matter the internal struggle.

There’s no question the overtime between Sweden and the Young Go Hards was breathtaking. When you give the most skilled players in the world more space and time than they’ll ever find in normal circumstances they’re going to do special things. There’s no consequences, of course. But you can acknowledge the empty or fake aspect of it while enjoying the spectacle, said the pro wrestling fan.

There was a moment that encapsulated why you have tournaments like this, and why I hope it keeps going (and replaces the Olympics). A minute before scoring the OT winner, Nathan MacKinnon streaked down the ice from the red line, only one defender between him and a date with Henrik Lundqvist (and who wouldn’t want that?) That one defender was Erik Karlsson.

Here we have one of the fastest, most skilled and exciting players in the league in MacKinnon, facing up to a two-time Norris winner who happens to be one of the best skaters around as well. And there was no safety net for him, given the paucity of teammates and the abundance of space for MacKinnon. This is the sport at its highest point.

MacKinnon faked inside and then tried to beat Karlsson to the outside. Karlsson stuck with him, while skating backwards, and at the last moment before MacKinnon was clean through poke-checked the puck away to start a rush the other way. This was done at Millennium Falcon speed. If you blinked you missed it, given the pace at which these two play.

But it was best-on-best. It was for true stakes. On a cold, sterile February night this wouldn’t mean anything, and even if it did it’s not very likely you’d find MacKinnon and Karlsson on the ice against each other very much for a host of reasons. This tournament culls the great percentage of the league that isn’t capable of anything like this. If it wasn’t Karlsson MacKinnon was bearing down on, it would have been OEL or Hjlamarsson or Hedman, more of the best in the world. You can’t avoid that kind of thing when you’re only dealing with the best 30-35% of already the best players in the world.

That’s why these tournaments rock. That’s why people love the World Cup in soccer. That’s why a lot of people still watch Olympic basketball, if only to see the lineups the US can roll out. If I got nothing else out of this tournament, and I certainly did, I’ve got that moment that reminds me why I watch in the first place.

These are also two players who the greater nation won’t see much when the season starts, because they’re not Rangers or Flyers. We know where to look for these kinds of things and do. Too bad we’re the only ones.