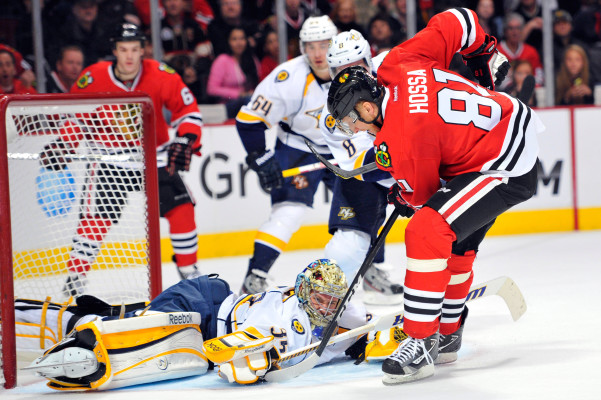 So I was going to do a Sugar Pile today, and we didn’t really mean to stop doing it. We simply forgot. However, at this point you know who would go where so we’ll save it for the All-Star Break and then pick it up regularly from there. And there’s other news that concerns the Hawks.

Pekka Rinne is going to be out 3-5 weeks, and that’s a very big deal for the Hawks.

I don’t want to belittle the Preds as simply a one-man team, because they’re not. Their possession numbers are right in line with a good team, they have a lot of depth at forward even if they only have the one premier scoring forward in Forsberg, and they might have the deepest blue line in the West. They’re not going to fall off a cliff.

However, they’re also not going to get a .960 SV% at even-strength from Carter Hutton. They’re going to give up more goals, though they score as many goals as the Hawks per game so they may be able to survive. But I think we can safely say that they’re not going to remain at the clip that they have been.

And Rinne does clear up some cracks they have. Their top pairing of Roman Josi and Shea Weber are underwater in possession, seeing the toughest competition. Both of their PDOs are over 103, and that’s not even really close to highest on the team. That’s coming down.

We have something of a sample size on Hutton. He played in 40 games last year with a .910 save-percentage. That’s not god-awful but it isn’t stellar either. Maybe behind an improved Preds team now that comes up a bit, but it isn’t going to approach Rinne’s .931. Even if we give him .915 (and that might be generous), their goals-against is going to jump about half a goal per game.

And the schedule they see in the next month is not exactly kind. The Preds close the pre-break schedule with the Caps at home tomorrow, followed by a trip to Detroit the next night and finish up in Montreal. Not the hardest, but hardly gimmes.

After that they get the Avs twice, sandwiching a trip to St. Louis. It’s off to Pittsburgh, home for the Leafs, Ducks, Rangers (who hadn’t lost in like two months before getting clocked by the Islanders), and then down to Sunrise before returning home to see the Lightning. Rinne could be back right after that, if not a little before.

It’s not hard to see the Preds coming out of that stretch like 5-4-3? Maybe worse?

Sadly, the Hawks schedule at the same time isn’t exactly a hanging curve either. The Jets on Friday and they’ve been a major pain in the ass already this year. Then it should be two bankers with the Stars and Yotes at home before a trip to Pittsburgh right before the All Star break where you worry about give-a-shit levels.

After the break, the Hawks embark on a pretty nasty-looking six game trip. It starts with the California swing, and then the first trip into Winnipeg, a desperate Wild team, and then down to Meth County. But the Hawks usually do well on their extended road trips, the nine-game march of death in 2012 notwithstanding. If Rinne is still out by the time that trip ends, the Hawks have an eight-game homestand after, where some serious ground could be made up.

Let’s say the Hawks go 7-3 in that stretch before and after the break before that long homestand, a totally reasonable expectation. If the Preds collect 12 points before that Lightning game, the Hawks will be two points back with a game in hand and eight home games staring them in the face. And that’s on the high end of what we can expect the Preds to collect with Rinne out.

Strike now, is basically the point I’m making here. While winning the division didn’t really matter last year, and any one of the Jets, Hawks, Preds, and Blues could slip into the wild-card spot (though do we really think the Jets are going to maintain this?), avoiding Rinne in the first round is probably best for everyone’s well-being.