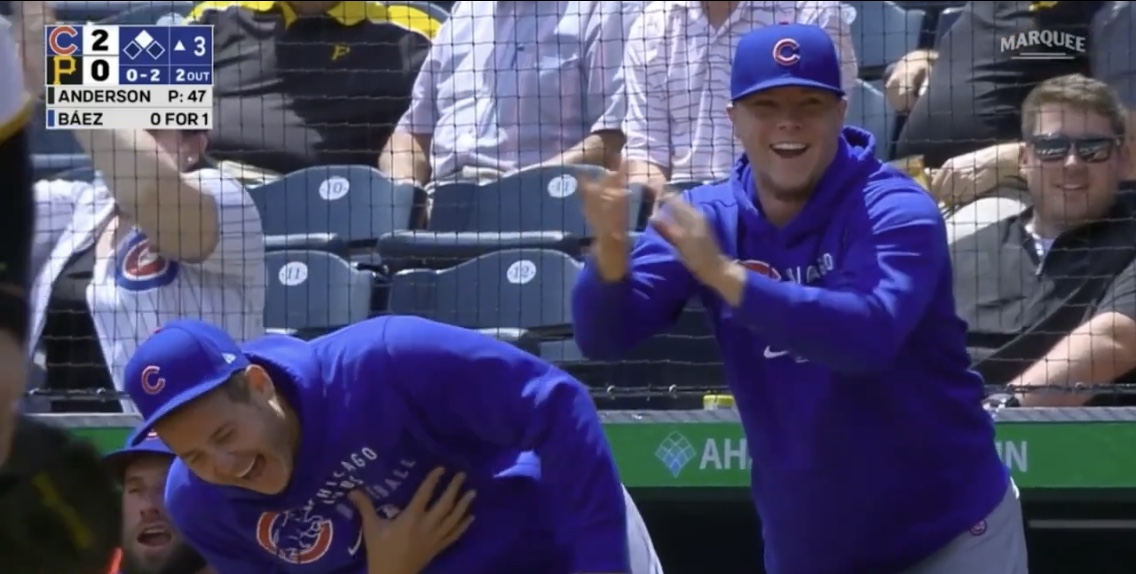 I have returned from the boonies of southern Ohio, where I was constantly asking other people for their phones with better data than mine to check the score of each Cubs/Cards game. Two out of three wins ain’t bad for a Cubs team that was sitting at the bottom of the NL Central not too long ago. (Also, shoutout to the White Sox across town for slowing down the Cards enough this week so we could tie them for 1st place. Really couldn’t get a sweep there though?)

The Pirates are still garbage, despite the distant memory of them making us look like fools in the beginning of the season. The Cubs are finally on a roll and made this sweep look pretty easy, although that’s because it was for the most part. Let’s break these games down.

The Cubs started this game off with a spectacular passed ball by P.J. Higgins, filling in for the injured Willson Contreras. This happened after Jake Arrieta allowed a single and a double in the first two at-bats of the game. Another single allowed the Pirates to go up 2-0, and by the 2nd inning Arrieta still didn’t have a handle on things. He allowed a double, hit a batter and then allowed a single to make things 3-0 Pirates.

It was singlehandedly Joc Pederson who came to save the day for the Cubs. He hit two home runs, one a solo shot in the 3rd and one a two-run homer to tie the game. Then the old guard came up to bat to take back the lead, as Javier Baez doubled and Anthony Rizzo batted him in with a single.

Then, Nico Hoerner got hurt. It is yet another nasty hamstring injury for the Cubs, as the injury beast continues to ravage this team. Eric Sogard was his replacement, of course. Additionally, Matt Duffy also sat for this game for injury-related reasons, so you know that can only mean seeing even more fresh faces for this fielding group.

Shortly after this injury delay, Keegan Thompson went in to replace Arrieta after 5 innings pitched, 3 runs, a walk, and 7 strikeouts. Thompson threw 1.2 innings and looked pretty nice, allowing no hits and only two walks. Andrew Chafin immediately allowed a double but was able to get out of the two-out jam with a strikeout. Ryan Tepera and Craig Kimbrel pitched the 8th and 9th innings, respectively, allowing only 1 hit between the two of them and allowing the Cubs to squeak past this one with a win, pulling one game behind the 1st-place Cardinals.

This game was a duel of pitchers playing against their old teams, as both Trevor Williams and Duane Underwood Jr. saw significant time today. Pirates starter Wil Crowe only lasted 1.1 innings, where he allowed 5 hits and three of four Cubs runs on the day. He only had one strikeout to his name before Underwood Jr. was called in to take his place, playing the next 3.2 innings and only giving up one hit throughout that span.

The Cubs were able to get up big in the 2nd inning thanks to the aforementioned ugly pitching by the Pirates. Thanks to having Jake Marisnick, Jason Heyward and now Hoerner on the 10-day IL, the Cubs called up Rafael Ortega to play center field today, where he was walked by Crowe and then was sent home thanks to a two-run homer by David Bote. The Pirates then allowed two Cubs singles, got a flyout, and allowed a Kris Bryant single to score Sogard to make it 3-0 Cubs.

After this starter’s meltdown by the Pirates, the pitchers on both teams were able to limit runs. The Cubs didn’t only get one hit until the 6th inning, where a double and two singles scored Eric Sogard again, giving the Cubs another insurance run. Trevor Williams finally got a win against his former team, pitching 6.0 innings against his former team, allowing only three hits and one run, striking out 7 batters. His only run came in the 8th inning after he allowed a double and a single to start things off. However, a double play and a strikeout kept things from going sideways for the Cubs.

Tommy Nance pitched an inning today, doing pretty well with no hits, a walk, and a strikeout. The last three Cubs pitchers were able to all but completely shut down the Pirates, allowing only two hits total and striking out four batters. Craig Kimbrel was up to his old tricks, closing things up for the team easily.

The Pirates tried their best to recover after their hilariously unacceptable fielding blunder in the 3rd inning, after we all watched decision making skills on the field that were so poor I hadn’t seen anything similar since playing tee ball. And that play alone certainly cost the Pirates the game — if they had just…stepped on first base, the Pirates’ three home runs later on in the game would’ve been enough to at least send this to extra innings. Ian Happ’s single, which was another fielding atrocity in and of itself, ended up scoring Javy Baez after he made MLB headlines with that baserunning, giving the Cubs a lead they would never give back.

In other news, Kyle Hendricks was at least able to play seven innings. He probably wouldn’t have played as long against any other team, but the Pirates are still on another level of horrific in our division and because of it Hendricks was able to comfortably give up six hits and three solo home runs without giving up the lead. Dan Winkler and Ryan Tepera were the bullpen appearances, striking out two, walking two, and only allowing one hit between them.

From a hitting standpoint for the Cubs, Kris Bryant is still playing at MVP levels, homering as the second batter in the 1st inning to start the game off on the right foot and grounding into a double play that ended up scoring Eric Sogard. In addition, Anthony Rizzo sat out his second straight game due to more muscular strain. One of the many new faces who have appeared recently to fill in the growing number of fielding gaps was Patrick Wisdom, whose full count solo homer in the 4th was overshadowed by the fielding debacle the inning before but was a pretty nifty one.

The Cubs play the Reds this weekend, who are at the bottom of the NL standings if you pretend the AAA-level Pirates don’t exist. The Cubs will need to rack up points against the Reds because they play the Padres next week who are 32-19 and atop the NL West. The Reds are similarly banged up with players going on IL and having knee surgeries and all kinds of tough stuff. In addition, the Reds will be giving a pitcher his big league debut tomorrow, so we’ll see him and hopefully not any more of Amir Garrett, because I’ve had about enough of him since the last series.

See you then, and go Cubs go!